There are few enough games that begin with the letter N, that sorting through them netted less than half a dozen results in my sprawling digital library. Fortunately, my relationship with one of them prompted a nostalgic trip and an interesting notion: Ryu was possibly the first Meatboy. You heard me right. The unforgiving difficulty of Ninja Gaidens precise controls and relentless enemy spawns had me grinding my thumbs into the NES controller.

Version parity is almost ubiquitous, these days. By that I mean Skylanders played the same on the Xbox 360 as it did on the PlayStation 3 and Nintendo Wii, in spite of prevailing hardware distinctions. The Wii was fun, but compromises had to be made in comparison to the other two versions. All of its mechanics and features were intact, and you could use your character on all platforms. Its a sort of equity we dont often experience, but for $15 a figure, you better believe we should.

Ubisoft was ahead of the market with Skylanders, and necessity dictated that each share gameplay mechanics, levels and - well, everything else. But, such was not the case with Ninja Gaiden. My first experience with the franchise was the flashy, glass smashing arcade cabinet. Ryus eye catching introduction captured more than a few of the meager supply of quarters I had. Sometimes I would walk home, just so I could spend a little time with the cool dude in the mask.

Why Ryu stalks the streets and beats the living daylights out of masked men was never explained, except for a single screen I could barely read and remember even less. 'Ninja guy being cool, must play.' Pretty basic stuff for a fourteen year old. Then I discovered he was also playable on the Nintendo Entertainment System. Boy what a let down that was.

Except in a strange way it wasnt. I remember thinking this is Ninja Gaiden? My cool dude ninja had become a tiny sprite who rushed away from and into danger heedless of his well being. This was not the stealthy, world aware warrior I had come to know. However, I underestimated Konami. Knowing the systems limitations, they brought out Ninja Gaidens other mysterious qualities with state of the art cutscenes and snippets of suspenseful dialogue. 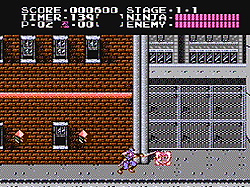 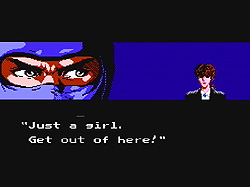 Mechanical difficulty has become a staple of the Ninja Gaiden franchise, and its NES port is merciless. Memorization, muscle memory and a little hope is the only way youre going to survive. Yes it was typical of games in the 1980s not to cater to casual gamers, who weren't defined as a player group, but Konami persisted with each level to test your patience and skills. A mere three lives, no continues and no password system meant you had to painstakingly master each part of the game.

Ryu had some ninja-y tricks to make your endeavor more challenging. As you might expect, theres no hint system; boss weak points are not discussed, and when youre out of ninja stars, youve got to find some more or make due with the pig-sticker that is the dragon sword. Uh, I mean, the legendary blade bequeathed to you by your murdered father. It will slice enemies in two and vaporize their carcasses, so its got to be impressive. 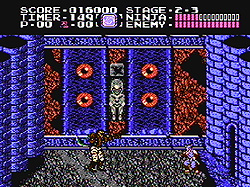 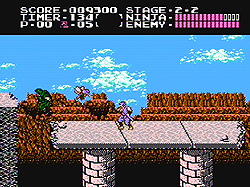 Except that memory limitations and programming oversights have enemies respawning the moment after theyve left the screen, even if youre coming at them from the opposite side. This will result in many deaths that only persistence and self control can overcome. In my case, I put it down and moved on to Tetris. Thats a review for another day, however.

Ninja Gaiden gives you a few reasons to press on, and the first of these is the story. To be able to beat it was to be one of the select who could find out what happened after Ryu escaped from that prison cell. In order to accomplish that, you've got to use Ryu's skills: Hes got a wall hanging trick, a bevy of bizarre and fun secondary weapons to play with, of which my favorite was the red ninja star with the personality of a boomerang. You could even con it into taking out a few extra enemies if you timed your jump before its return.

The lure of Ninja Gaiden, and persistence of the player, was its own reward. As with other Ninja themed games  like Ninja Warriors, Again  your own skills are going to win the day. Has that ethic been lost? Clearly not, with games like Super Meatboy straining thumbs and stress levels around the world. So lets be grateful for demanding games like Ninja Gaiden, and push ourselves just a little harder when a challenge arises. As for finding yourself a copy of Ninja Gaiden, eBay and emulation are your best bet. Fight with honor, warrior!

© 1998-2022 HonestGamers
None of the material contained within this site may be reproduced in any conceivable fashion without permission from the author(s) of said material. This site is not sponsored or endorsed by Nintendo, Sega, Sony, Microsoft, or any other such party. Ninja Gaiden is a registered trademark of its copyright holder. This site makes no claim to Ninja Gaiden, its characters, screenshots, artwork, music, or any intellectual property contained within. Opinions expressed on this site do not necessarily represent the opinion of site staff or sponsors. Staff and freelance reviews are typically written based on time spent with a retail review copy or review key for the game that is provided by its publisher.