There are unintended parallels between the U-Play Online Kickstarter funded game and lifestyle simulated here. YouTubers Life places you in the shoes of an avatar that could have been ripped from Xbox Live, seeking the idyllic life of a self-made video celebrity. I couldnt help think of the fact that this game has first world problems written all over it, thanks to modern conveniences, but with this premise, what can you expect?

Maybe something with fewer glitches. First of all, youll have to get used to the Robot Chicken style mouth animations that have your characters mouth making a mad dash for either cheek at random. Then be ready for your characters head to clip through the camera whilst recording video using a tablet, or hugs through other characters because they are too close when their animations are triggered. 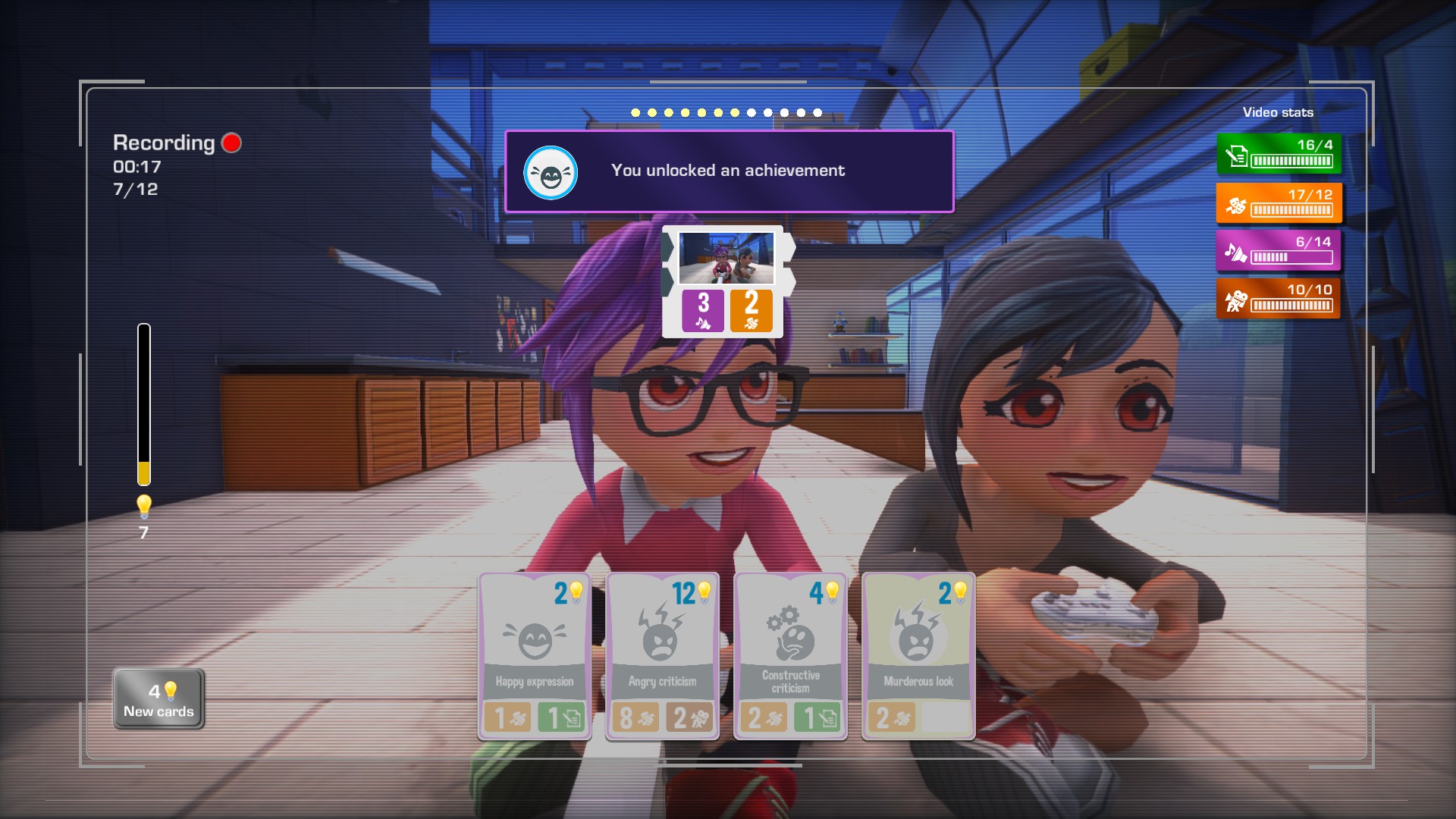 Audio cues and mumbles have a vague Simlish take, but come across as silly rather than funny. Sure theyre amusing, but there arent very many of them, and most seem oddly timed. Eleven hours in Im still not sure why my celeb hopeful gives a good cheer when hes seated on the floor recording, but not when hes standing. YouTubers Life strikes me has at odds with itself about how serious it needs to be about the subject matter.

YouTubers Life assumes the form of a time management celebrity simulator, but eschews the use of charts or calendars. These are rolled up into a mobile phone imitation that lives at the bottom right of your screen. A single click causes it to pop up, so you can track social activity, such as Facebook or Twitter; join scheduled events like movies, parties and conventions. The reason for the variety is that you can choose to run a Game channel, Music or Cooking channel, respectively. With so many movies to attend, why not a movie review channel? 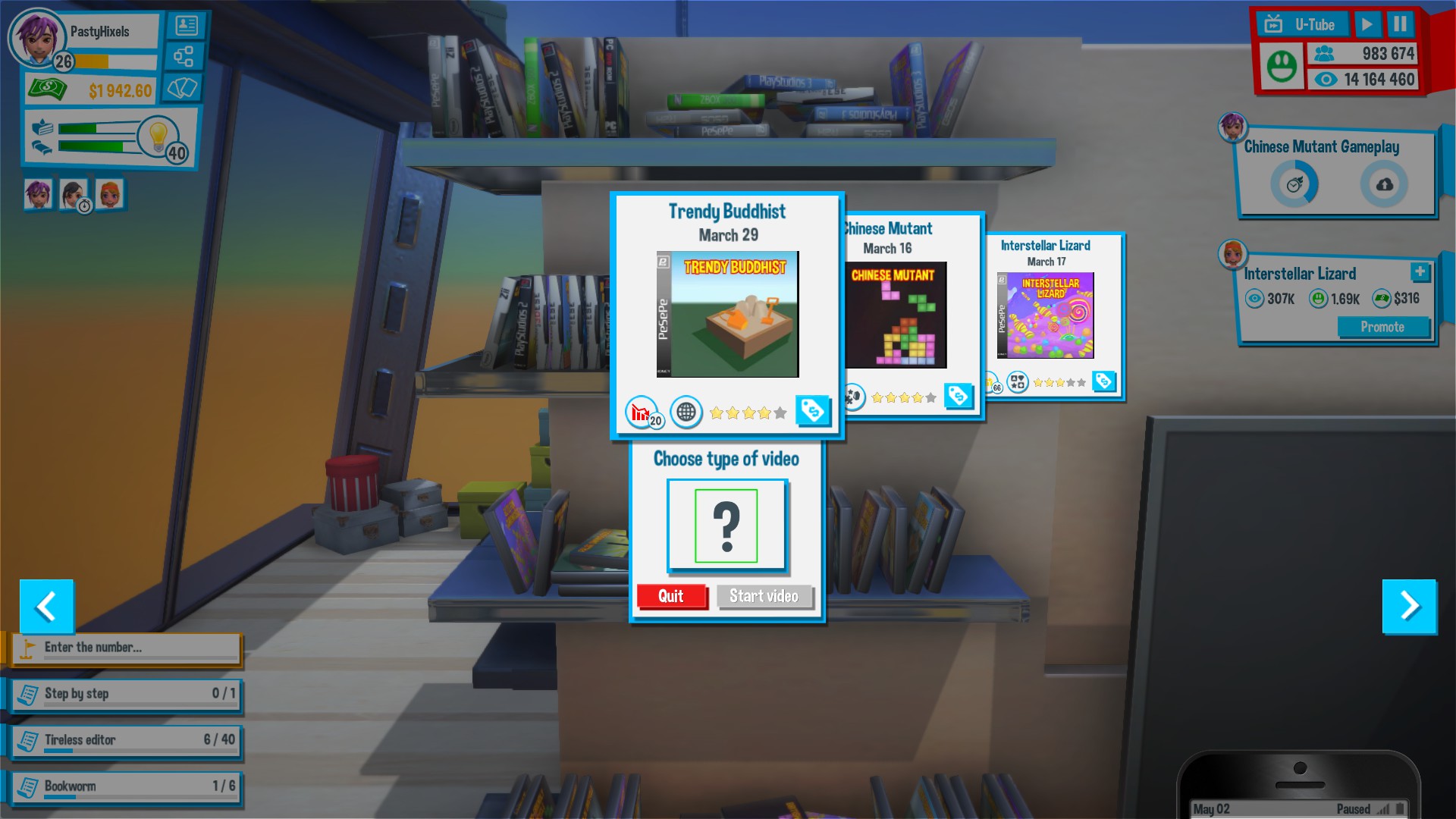 Probably for the same reason the game has so many problems to begin with: It was funded on Kickstarter. Like most kickstarted games, it needed more than talent, enthusiasm and money to become a well formed product. The same can be said of the simulation. In order to feel complete, there really needed to be more opposition than study, eat, sleep, pay the bills. Oh, certainly, it is an procedural checklist style take on this way of life, but theres just not any challenge to it.

Not that U-Play Online doesnt deserve credit for its mini-games. Youve got to upgrade your rig (desktop computer), show some personality, which you acquire in the form of cards, and increase your views and subs. I would have enjoyed more in the way of channel customization instead of the endless day-to-day of recording, editing, living and back to it again. There arent any opportunities to make the channel your own, though you can recruit a team of friends to play with. 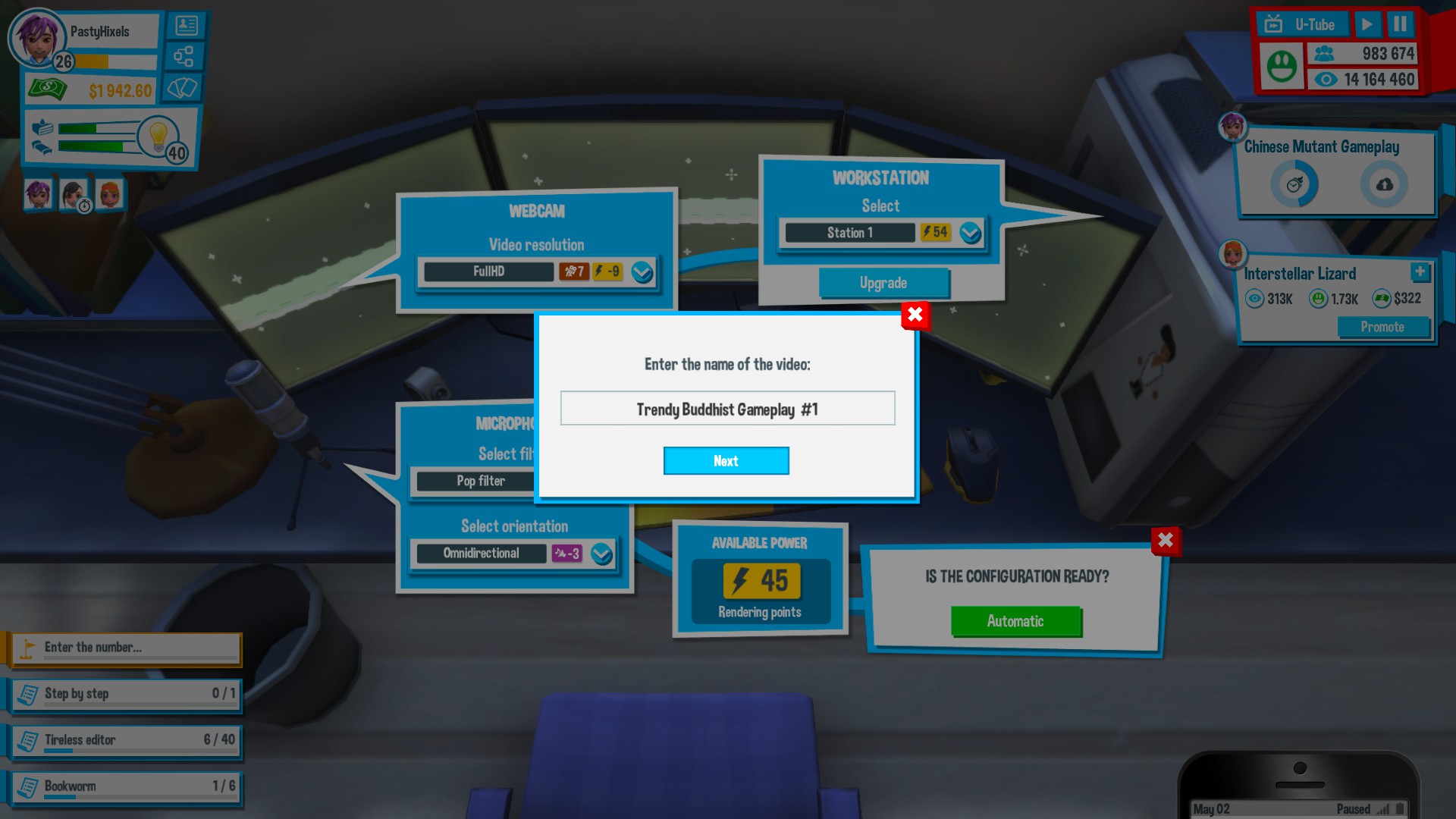 Thanks to your phone, you can track the level of your relationship with friends and chat with them to either collaborate on videos, pursue a very limited romantic life  which is fitting  or watch them complain and unfriend you as you focus on making videos for a living. You cant keep them all, and they all have the exact same amount of patience, which is a little disappointing.

I dont know if this is typical of all playthroughs, but Ruby, a friend who defaulted as very close, turned out to be a very talented video producer who I later hired at a great expense to join my U-Tube channel crew. Each YouTuber in your crew has video production attributes, which you will build up with the cards you earn and play during recording sessions, and paying to study courses in subjects such as Sound Recording, et al.

The recording mini game has you choosing cards in timed segments, such as a greeting, a funny comment, or something more dangerous, like a copyrighted clip of video. The latter can have consequences such as telling the DMCA to take a walk, which will earn you a bonus of 10% subscribers. Or you can pay the fine, which costs you as many subs. Note that copyright rules arent as restrictive in North America as they are in Spain. 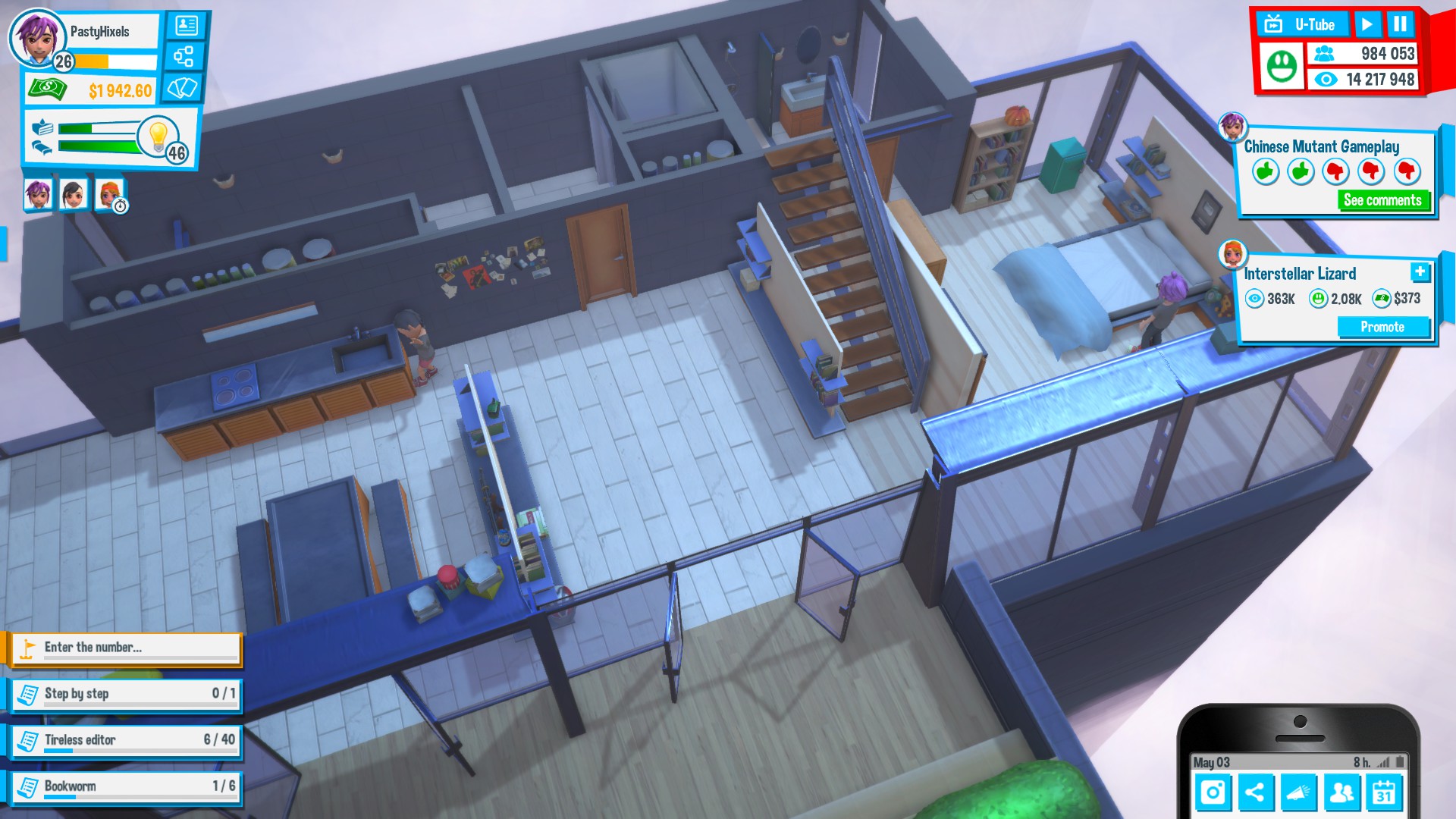 Of all the most interesting issues, at least to me, was the potential of dealing with copyrighted content. Most of which is silly by now anyway, because there are so many ways to get around copyright strikes as to make the system useless. Why not make it a difficult choice when finances are tight? When youre producing videos out of your bedroom, or apartment, there are opportunities to make some game changing choices. Unfortunately, U-Play Online took the less risky path in favor of accessibility.

Youll obtain new abilities as your character progresses, such as Vlogger skills that open up video blogging and interviews. These are conducted before events and movies, and enable you to form network connections so you can hire collaborators. You can also beg for subscribers, which is an essential activity... though one trick bothered me: Whilst promoting a video via #hashtag, YouTubers Life sideloaded my browser to ask for permission to post the in game comment on my real Twitter account. Maybe thats encouraged in certain circles, but boy howdy, not mine.

This was the only time YouTubers Life tried to self publicize, but it does serve as an indicator as to why the game fails to attract players. The cards you use to express yourself follow the patterns of real YouTubers, but dont make a lot of sense. It may follow that the cultural differences in expression are lost in translation, but, does it follow that critical comments are always negative, or general use comments always angry? The cards seem to think so. 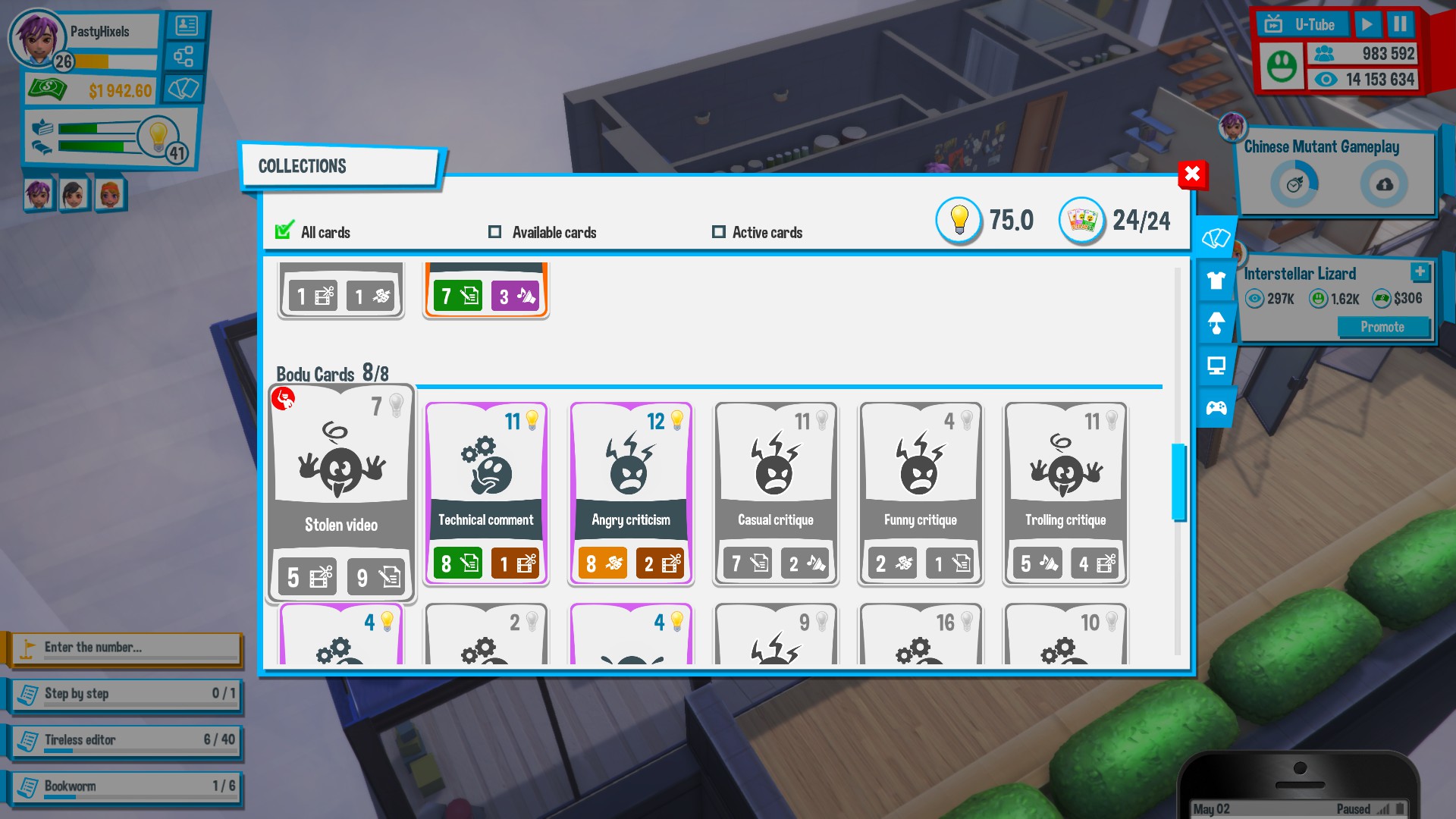 The core of YouTuber Life plays like most simulations: You control all of the avatars, but only have to manage the exhaustion and hunger levels of your own. Task juggling is a pleasurable pastime, and I would like to have seen more time devoted to the realism of this aspect of the game. Why is it an entire office has just one gaming station and as many as three desktop PCs? It artificially ramps of the rather low difficulty of given assignments.

Occasionally youll discover that an event hasnt ended properly and sent you back to your home, or another quest hasnt completed its visual transitions. This is easy to fix this - by reloading the game - but its strange that basic issues like these havent been resolved after a year of apparently good sales. Perhaps the player base just isnt broad enough... too many people actually trying to be YouTube stars for real. Ironic.

Thats the trouble with niche titles like this one. Either they get it exactly right, or the player is going to move on to something else. The dumb thing is that the game is actually rather fun, though too mindless to be rewarding. This was one of those games that bit off more than it could chew, and the result is a game that isnt deep enough to be satisfying, or broad enough to attract a larger audience.

If youre curious what it might be like to be a YouTube Celebrity, I doubt this game will slake your thirst. However, it does provide an interesting examination of the running mill nature of YouTube video production. Just enough to serve as a warning, I suspect. YouTuber Life is available now on Steam. You might at least get a few views if you stream it live on Twitch.

If you enjoyed this YouTubers Life review, you're encouraged to discuss it with the author and with other members of the site's community. If you don't already have an HonestGamers account, you can sign up for one in a snap. Thank you for reading!

© 1998-2021 HonestGamers
None of the material contained within this site may be reproduced in any conceivable fashion without permission from the author(s) of said material. This site is not sponsored or endorsed by Nintendo, Sega, Sony, Microsoft, or any other such party. YouTubers Life is a registered trademark of its copyright holder. This site makes no claim to YouTubers Life, its characters, screenshots, artwork, music, or any intellectual property contained within. Opinions expressed on this site do not necessarily represent the opinion of site staff or sponsors. Staff and freelance reviews are typically written based on time spent with a retail review copy or review key for the game that is provided by its publisher.