You think the idea of controlling 88 characters, each with their own standout skill, would be enough to entice me into playing 88 Heroes, but I was surprisingly unfazed after reading its gimmick. Probably thought it was going to be a cast of generic super heroes with powers seen a bijillion times before. Instead, the thing that actually grabbed my attention was a single image... of a basketball player dodging a multitude of death lasers while dribbling a ball. Now I'm in. A one-hit kill platformer, 88 Heroes plops you into obstacle courses with a barrage of hazards, such as spikes, lizard men in white suits, swinging spiked balls, exploding ducks, and so on. And from there, I realized the game had a lot more going on with it than I originally thought.

What separates 88 Heroes from similarly-designed games are its slew of goofy concepts and mechanics, mostly centered on the number 88. You have 88 minutes to complete 88 stages, and each stage has a timer counting down from 88 seconds. You're given 88 lives in the form of 88 characters with "unique" abilities, ranging from a person in a fly suit that vomits and a bat bot that freezes time when it doesn't move, to a man with a grappling claw in one hand and a coffee cup in another. Killing an enemy gives you 88 points. Collecting 88 coins allow you to revive a fallen hero. You receive PS4 trophies for scoring 8,888, 88,888, and 888,888 points. I'm not trying to be funny here, either; the devs added the number 88 to as many things as possible... 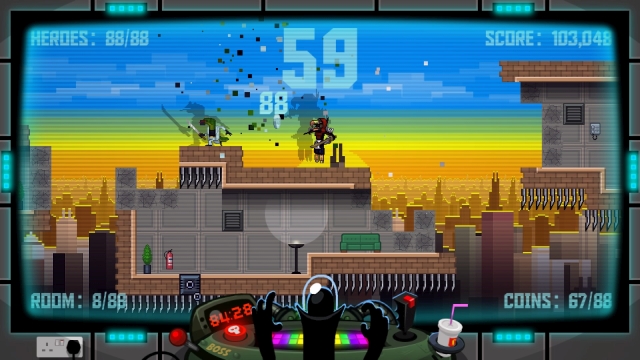 The game has a ridiculous theme, and that's clearly intended by the devs. Even so, a lot of these ideas actually sound interesting when mashed together in a video game, especially if done right. Unfortunately, 88 Heroes, at its core, is a standard title in the "masochist" platformer genre, going through the checklist of things you'd expect from such a game. You know, the kind of platformer where you go through a crazy difficult area with hazards galore, using precision dodging and jumping? And just when you think a safe spot's been reached, a final trap pops out of nowhere, killing you? Right before the exit? In terms of the way stage hazards are set up, the game won't win any awards for originality. They're functionally-challenging, at least.

Now, if you're still willing to give this a chance because you want more of the same, but in a title that constantly references pop culture, other video games, and Internet memes through its characters, know this: the core is stuck behind an aggravating flaw. The flaw, unbelievably, is the main, main gimmick of having 88 heroes, and it's really only because the game tosses you a random hero after every death. This would have been bearable if all these characters had decent abilities, but irritatingly, a good chunk either have nonexistent skills or joke powers. An Ashley Williams parody has shotgun blasts so powerful, they knock you back into pits and enemies, an error code character can glitch through a stage at any moment, and there's an armadillo whose special is to eat pizza, no attack move whatsoever. One character even has intentional input lag; great for platforming!

It's humorous for the first few stages, but the novelty quickly wears off and stops being funny when you realize lives are being lost at an alarming rate. That's something you don't want to witness in stage 15 of 88. Worse, the heroes' unique abilities aren't the only things making every character unalike, as each one moves at different speeds, are different sizes, have jumps that either float differently or end at different heights, and some can't duck, making situations more difficult than they should be. Imagine my pain of having to kill off a cool, powerful, tall character... because he couldn't hop over or crawl under the very first hazard of a stage. Or making it through a jump-focused map with one character, accidentally die, start the stage over with a powerful, missile-wielding character, then die again because that hero can't jump high enough to a ledge that leads to the exit. 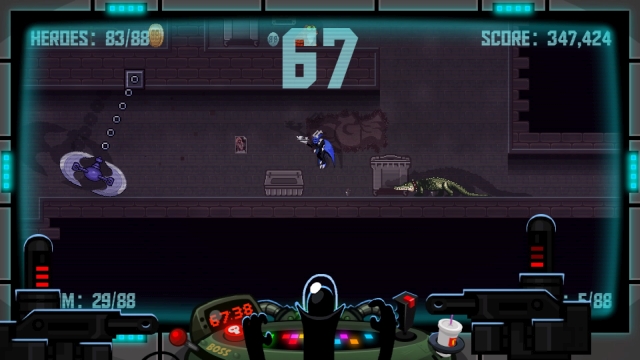 Sure, you'll improve with repeat sessions, getting to know the characters better, but the very act of fighting joke and handicapped characters in your care conflicts too much with 88 Heroes' other challenges and restrictions. Similar games give you the "luxury" of learning your characters' strengths and weakness, as well as assessing upcoming hazards; here, however, the pressure of fighting two timers at the same time, the in-stage one and the overall countdown, means you have to move at a steady pace just to reach the final stages. Mistakes will be made, especially since you won't remember how all 88 characters function at any given moment. Hell, the game autosaves after every death, so there's no circumventing errors. Thankfully, stage layouts never change, so memorizing them... through several playthroughs... will be your greatest asset. The thought of dealing with randomly-generated stages would be nightmarish.

Even when you get much, much better, going through 88 stages is an exhausting trial of luck. You can have an amazing streak passing a dozen stages with so few deaths and tons of time remaining, but a single segment can bring that fortune to a screeching halt. One stage can simply be a straight, linear path that involves jumping over pools of acid and opponents moving around on small platforms. Destroy the enemies, right? Well, you receive a character with no attack function and a really floaty jump. That hero dies, and the next one is a character that bounces on its own accord. That hero dies, and your next character is a literal question mark, pausing the action whenever you make an important jump... just to ask a question. So of course, death, and your next character has a weapon! That only shoots up. You pass the stage anyway, because a hero with a basic jump will do at this point.

But that lunacy is at the cost of several wasted lives and time, because the game refused to hand you a non-joke character. What's frightening about that scenario is how you know it's not isolated. It'll happen again, somewhere down the road, in a later stage. 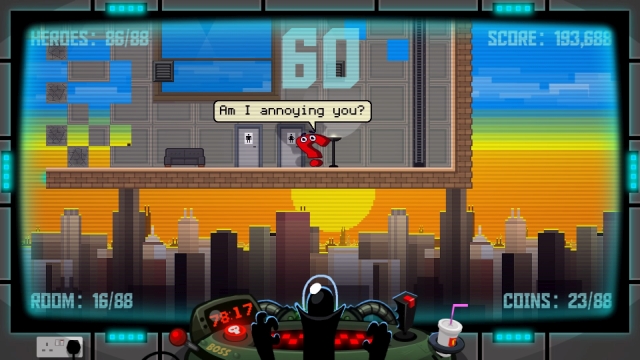 I understand 88 Heroes is meant to be an ordeal, but the struggle is so unnecessarily strong with this product, that it almost feels like the developers made it out of spite. I know that's far from the truth, but that's just how irritating it becomes from time to time. You have to give some type of leeway to the player, even if the product is intended to be masochistic. Take something away, or make revisions to a concept. Mix and match. Give each character two bars of health, or remove aggressive autosaving. Include a system that allows for the refilling of the main timer by just a little bit, or have an actual easy mode. Or, silly idea, remove the randomization aspect and actually design stages around their powers. Something has to give... You can't just backhand the player on every possible front, all while performing practical jokes on their survival gear. That's neither fun or funny.
2/5

If you enjoyed this 88 Heroes review, you're encouraged to discuss it with the author and with other members of the site's community. If you don't already have an HonestGamers account, you can sign up for one in a snap. Thank you for reading!

© 1998-2021 HonestGamers
None of the material contained within this site may be reproduced in any conceivable fashion without permission from the author(s) of said material. This site is not sponsored or endorsed by Nintendo, Sega, Sony, Microsoft, or any other such party. 88 Heroes is a registered trademark of its copyright holder. This site makes no claim to 88 Heroes, its characters, screenshots, artwork, music, or any intellectual property contained within. Opinions expressed on this site do not necessarily represent the opinion of site staff or sponsors. Staff and freelance reviews are typically written based on time spent with a retail review copy or review key for the game that is provided by its publisher.