It says a lot about a franchise that can carry the weight of a game as narrative and dramatically heavy as Other M. Is Samus over emotional? Dependent? Female? Could it be that Japanese attitudes toward women seasoned the plot with elements of emotional bondage that just werent going to play well in North America?

You are the fearless, perhaps intrepid, space bounty hunter Samus Aran. Your power suit enables you to fight on equal - and lets face it, usually superior - terms with the dangerous Space Pirates, who are commanded by Mother Brain, Ridley and Kraid. As their name suggests, when theyre not amassing wealth, they steal technology for use in their scheme of domination. The fearsome, parasitic Metroid are caught up in this scheme, as is Samus. 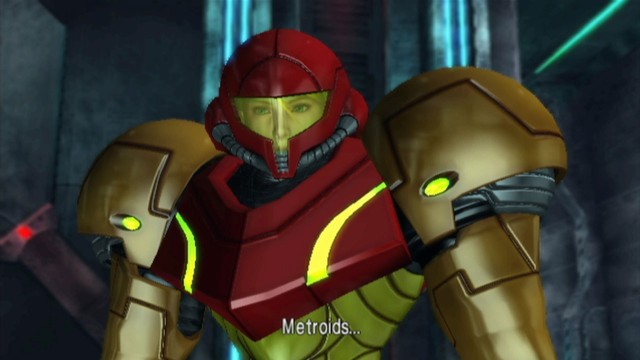 A little more about Samus before we get into the swamp of ire: She is the original badness of laser upgrades, missile wielding, super jump, power suited heroes. Back in the 1980s the world was amazed to discover the main character was female; it was a revelation. Nintendo reset expectations across the globe, and perhaps without Samus wed not enjoy the diversity of female gaming characters we do today. So, before we continue: Thank you Nintendo, and thank you Samus.

I dont believe for a moment that Nintendo and Team Ninja ever intended to portray Samus as less than a strong lead woman, complexities included. Of course, thats where the problems arise. At some point we were going to dive into her history and see it from Samus perspective. In Other M, thats what youre fated to do, and more than just through her helmet.

As the game begins were treated to a lavishly detailed cinematic scene depicting the ending events of Super Metroid (SNES). Anyone who hasnt played that timeless gem - well, this is your cue. Mother Brain is picking on a Metroid bent on saving your life. When she emerges from the memory (hush, you, Im not spoiling anything), meet Samus. Shes gorgeous enough to be infuriating for a number of reasons, complete with beauty mark just above her chin. Theres a little dialogue; Samus walking around in her now infamous Zero Suit and the tutorial begins.

Along with perspective, game mechanics have entered a new paradigm. Thanks to Metroid Prime, which hasnt happened yet, we have helmet targeting for missiles and the occasional charged shot to open blocked pathways. The rest of the game takes place in third person perspective. The camera has been pulled back enough to allow you full range of motion, but the quirk is in Wii-mote manipulation. 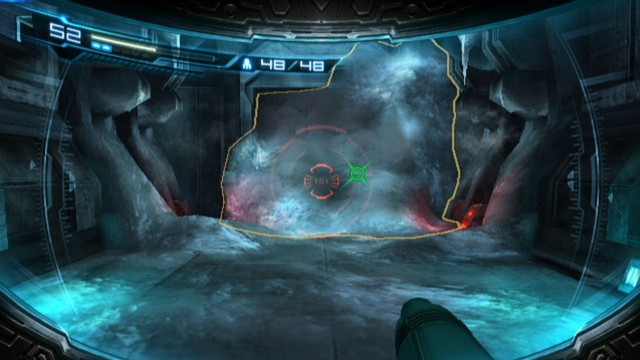 You cant use missiles on enemies. Thats right. Not when youre platforming in full range mode, anyway. Youve go to point the Wii-mote at the screen and aim carefully. Now, it is very responsive, and motion slows down drastically while youre wobbling about for a target.

Target locking occurs quickly when you hold the B button, and you can recharge your missile supply at any time in addition to your charge tank health supply. This accommodates for the fumbling youre going to be doing thanks to the motion controls. Look, they cant help being janky, so Team Ninja decided to upgrade you to the free room service during your stay. Wasnt that nice of them?

So many years after launch, and Nintendos successful stifling of any story driven approach to Metroid, getting into the gritty of why the stunted upgrade system fails to engage the player wont do any harm. Theres no you might love it here. I blame cultural mores and expectations; and maybe creativity. Maybe.

You see, Samus has kept all of the abilities she acquired in the story-sequential prequel, Super Metroid. Unfortunately for you, just when theyd be useful, she decides to respect the command of her former C.O., Adam Malkovich. This guy bugs me. Hes stoic, flat and... maybe its just the voice acting. Yes, voice acting. Other M is fully voice acted - everyone who has a speaking part also has a voice actor. No, thats not as wonderful as it sounds. 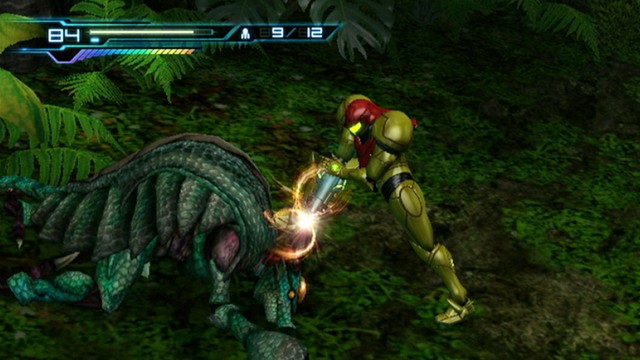 What were we talking about? Right. Adam. You might know that name from Metroid: Fusion. That tells us how much effort Nintendo has put into the development of this story (read: probably too much). Which, at this moment, has Samus deciding to disable every single weapon and ability not authorized by Malkovich. Okay, fine, you decide to see where this mulberry train leads. Where does it go?

Other M has it all: Jump scares; quick time events; investigative scenes; scores of hidden goodies; boss cameos from other games; a threaded storyline of intrigue and Samus internal monologue. If the game werent about her perspective, it could be written off as padding, because this Metroid is no longer than any other in the franchise. She doesnt drone on, but theres a drone in the voice actors tone that just fails to reach me emotionally.

The moments I feel like Samus should be fighting back shes held back by her incredible emotional backlog of unprocessed feelings for everything around her. Why I dont feel empowered when the game indicates I should? Because the scripted loss is needless and flailing; Japanese tragedy at its most typical. Samus is, so help her, a product of her culture. Quick time events can catch you off guard for just that reason, too: Shes so helpless that you dont expect her to be prepared to defend herself.

An American soldier would have stood her ground and told Adam to stuff it. Adam would have respected her for that, too. The authority interplay would have been far more interesting: Could they have been equals, and have him still make the same choice in the end? Yes, and thats another point against creativity on this score. Have her loss of power due to some deeper emotional issue she could immediately identify, then let her step up on her own as the Power Suited warrior who earned her stripes with dignity and self respect.

Secrets can be frustrating too, because once you clear an area of enemies, all collectables are revealed on your mini map. If you cant get it right away, you know youre in for some backtracking, and Other M isnt bashful about it. Why they decided to make entire portions of the station inaccessible until after game completion is a mystery to me, but it does provide something to do if you are a completionist. 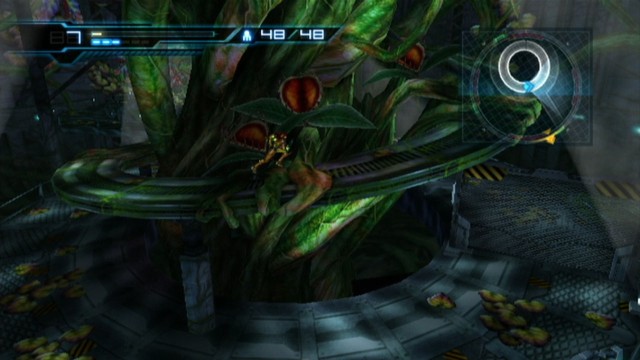 Some of Other Ms brightest spots are purely mechanical: Once Super Booster is authorized... sigh... Shine Spark is fun to play around with. Coping with increased gravity is evocative in audio expression and video effect. Other M would play brilliantly as a game without all of its narrative baggage, and thats the reason I enjoyed it. The story has been told before and will doubtless be repeated, but its mechanics are distinctive and prove the Wii has something entertaining for space wandering action platformers.

Other M is not to be underestimated as a platformer with plenty of puzzles to explore, secrets to unlock and frantic, challenging battles to be had. Upgrades, when acquired, are easy to access and even easier to control. When do Wii games get to look this good? The graphics are rendered at a paltry 480p, but the environment is lore rich and will transport you. Try it on a Wii U with its hardware upscaling to 720p or 1080p. Load screens occur so infrequently as to be nonexistent.

The soundtrack is instantly forgettable. Theres no personality to be had, just a cinematic score that could have been tied into any number of space wandering epics. Motion controls are janky, and Team Ninjas compensation proves they know it, but theyre as tight as they can get. The emotionally heavy, predictably tragic story dulls down the tension, stress and excitement of exploration and mystery. Ridley is a pain to fight, every time.

Other M is a delicate blossom of mechanics weighed down by a mainstream-generic story of cinematic aspirations. You can watch all of the cutscenes as a movie, but you cant play the game without the cinematics except to skip them. Your only option for playing this conflicted title is to hunt high and low for a retail disc copy for an emulated or real Nintendo Wii. Good hunting.

If you enjoyed this Metroid: Other M review, you're encouraged to discuss it with the author and with other members of the site's community. If you don't already have an HonestGamers account, you can sign up for one in a snap. Thank you for reading!

© 1998-2022 HonestGamers
None of the material contained within this site may be reproduced in any conceivable fashion without permission from the author(s) of said material. This site is not sponsored or endorsed by Nintendo, Sega, Sony, Microsoft, or any other such party. Metroid: Other M is a registered trademark of its copyright holder. This site makes no claim to Metroid: Other M, its characters, screenshots, artwork, music, or any intellectual property contained within. Opinions expressed on this site do not necessarily represent the opinion of site staff or sponsors. Staff and freelance reviews are typically written based on time spent with a retail review copy or review key for the game that is provided by its publisher.