How does one go from owning a newly-opened, humble restaurant that only sells sushi, to a cream of the crop, varied establishment that won the admiration of every day folks and food critics? With just one waiter to back you up? Fast Food Panic takes you on that journey in a casual product that gauges your skills under pressure. Through 15 stages, you're tasked with pleasing customers that constantly walk in and jam your paltry abode of four tables, trying to bear fruit with score goals before time runs out. And to gain points, you'll need to craft meals successfully with the stylus in a speedy manner, and do so without being half-baked about the procedure. 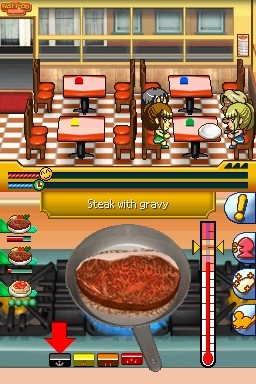 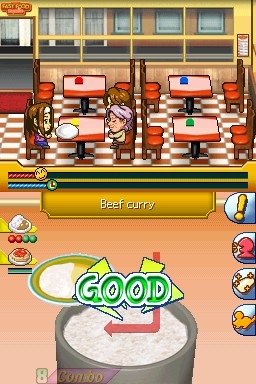 A piece of cake when there's only two orders to fulfill, but you quickly fall into a pickle when business picks up and several dishes must be completed at the same time. Basic actions, such as scooping rice from a bucket, swirling ingredients in a pan, or taking food out of the oven at the right time, become harder nuts to crack when securing points for victory; conduct these actions poorly, and you won't receive a big score from customers, and worse, you won't get anything if they storm out after waiting too long. "Distractions" also become a factor a couple stages in when bringing home the bacon, as you have to greet customers when they come in, clear dishes off tables, and shoo away mice. Granted, these are all done with a simple screen tap, but you'd be surprised how easily they divert from the whole enchilada, such as an oven with burnt pizza.

But just when it feels like you jumped out of the frying pan with solid coordination to combat all the disorder, you then leap into the fire as more objectives enter the fray. Some stages introduce an additional goal that has to be met, such as pulling off combos or satisfying three food critics, with the latter be a grueling act due to dropping everything and outright ignoring other customers just to butter up these specialists. It's one of those moments where how well you did before and after the critics' presence strongly factors into the overall completion of a stage. Also trying to squash your flow is the inclusion of more complex distractions; with the reliable waiter being overburdened, you have to drop your cooking like a hot potato and do a bit of extra work occasionally, such as operating the cash register and delivering meals on a scooter.

The vigorous tone and flavorful aspects, even if minor, are welcoming during the mid-to-late stages, since they help curb repetition that a game of this nature can quickly fall into. However, the frantic flow also unintentionally pokes holes in Fast Food Panic's design, revealing flaws that, at times, act as bad apples to your success. Unfortunately, when things get as busy as popcorn on a skillet, it becomes too obvious the motion controls haven't been programmed thoroughly to keep up with the pace.

Making a hamburger, for example, should be easy as pie, but when I'm speedily scrolling through ingredients, the game sometimes confuses my basic left and right motions as a downward gesture... thus planting the wrong ingredient. There have also been moments in my playthrough where doing simple curve motions won't register if I went at just remotely brisk speeds, and there have been several nutty instances where the game bugged out when I was pouring curry. I should stress that, more times than not, these issues don't destroy your chances at beating typical stages, but it does feel like you're walking on eggshells in stages with extra goals. Specifically, goals where such requirements are pleasing three critics with barely any mistakes, or cooking five perfect meals with no errors, which can be a fine kettle of fish... 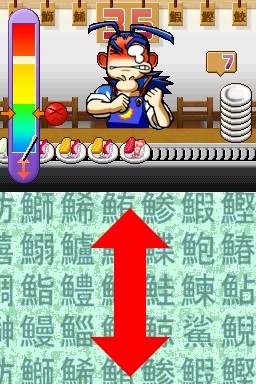 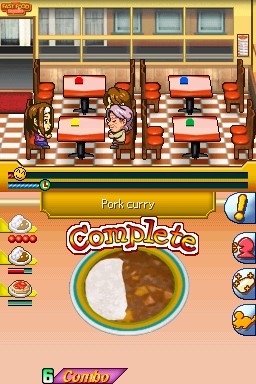 Though, before the difficulty can really cook up a storm, these problems never have the opportunity to drive you bananas on a consistent basis, since Fast Food Panic concludes after 14 stages. Even after tossing in varied situations that beef up the gameplay throughout, you're still just making the same four to five recipes per stage, so it really was an appropriate time to stop. But there is a bonus 15th stage that has you pitted against a grueling time limit, as well as a minigame mode with a surprising amount of brief diversions, just for those looking for a little more meat. The devs didn't bite off more than they could chew with their limited resources, did the best they could with them, and just got out when everything started feeling too samey. Fast Food Panic might not be the greatest thing since sliced bread, but sometimes half a loaf is better than none.
3/5

If you enjoyed this Fast Food Panic review, you're encouraged to discuss it with the author and with other members of the site's community. If you don't already have an HonestGamers account, you can sign up for one in a snap. Thank you for reading!

© 1998-2021 HonestGamers
None of the material contained within this site may be reproduced in any conceivable fashion without permission from the author(s) of said material. This site is not sponsored or endorsed by Nintendo, Sega, Sony, Microsoft, or any other such party. Fast Food Panic is a registered trademark of its copyright holder. This site makes no claim to Fast Food Panic, its characters, screenshots, artwork, music, or any intellectual property contained within. Opinions expressed on this site do not necessarily represent the opinion of site staff or sponsors. Staff and freelance reviews are typically written based on time spent with a retail review copy or review key for the game that is provided by its publisher.