Monster Hunter may be the most familiar title within the hunting sub-genre of RPG, but there are a variety of capable contenders for that crown. Many of them have tried to introduce and popularize a new twist that will secure a loyal following. The Toukiden franchise, for instance, prides itself on being thoroughly steeped in Japanese mythology and history, as seen both in its world building and in the variety of adversaries it presents. Taking place only a few short years after the familiar adventures that once played out in Utakata Village, the story in Toukiden 2 introduces a new village called Mahoroba, which desperately needs heroes who can fend off a horrific new threat.

In perhaps the largest shakeup the niche has yet seen, Toukiden 2 finally breaks away from the compartmentalized arenas that have become the norm. They are replaced by a large open world that consists of interconnected regions, each with fast travel points and its own separate sets of collectibles and monsters. Fear not, because the numerous areas remain expansive enough to accommodate arena-sized battles, once an oni has been engaged. While the initial load times are a bit on the longer side (even when playing on the Playstation 4 Pro, with a SSHD installed), the player can then run from Mahoroba Village to any distant point on the map without hitting a single loading screen. 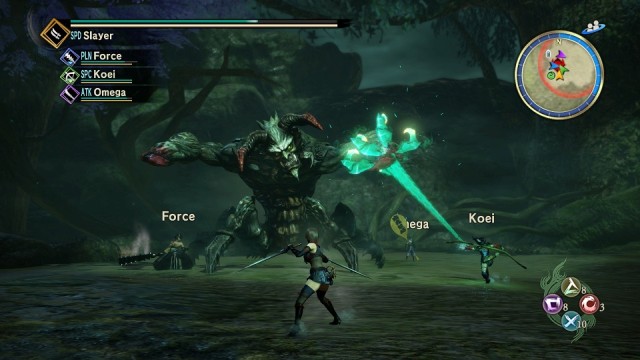 The transition to an open-world design is Toukiden 2's most successful move. Games in the Monster Hunter vein long have asked the player to farm common materials or repeatedly battle the same monsters in order to gain sufficient materials to upgrade equipment. This experience is usually marred with the abundance of loading screens, as well as the need to replay a given mission until a specific item drops enough times. The same norms don't apply to the "Ages" featured here, however. Once the player is dropped into the biome of their choosing, they can run around and gather materials freely, while challenging oni after oni (for as long as their stamina and inventory space endure).

Traveling around the open world of Toukiden 2 might not be particularly enjoyable if the player simply had to wander everywhere at a fast walk. To help expedite the process, hunters have access to a focus-draining dash move that covers more ground in less time. Players also can use a move that resembles the Thorn ability featured in Freedom Wars. They whip out a magical demon hand that lets them climb vertical surfaces or swing across specific gaps. Both of these new abilities can be put to use in combat, as well. You'll find few moments more satisfying in Toukiden 2 than when you reach out across the battlefield to grab hold of an oni, then smash it to the ground so your team can gang up and purify it with a coordinated effort. 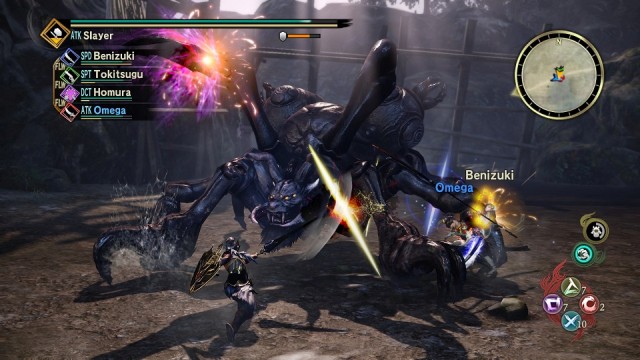 Omega Force, the development team responsible, seems to have leaned a bit too heavily upon its Dynasty Warriors roots, though. Either that, or it wanted to make an action game that was more accessible than Monster Hunter. Whatever the culprit, Toukiden 2 suffers from an unfortunate lack of finesse where combat is concerned. Showdowns quickly devolve into fits of button mashing if players don't insist on taking a more restrained approach. Since most large oni possess excessively large health pools, battles may leave you wondering which will run out first: the enemy's stamina or your patience.

Past Toukiden games have stood apart from the pack by placing substantial emphasis on the dismembering and dismantling of an oni that must occur before it is properly defeated. The average oni is an imposing beast, and not only due to a massive health pool. It is immune to traditional combat methods. To stand a chance, slayers must strike at various limbs and weak points, to break them off purify them. As the oni becomes purified, little by little, its defense capabilities suffer. Only then can you take down a previously terrifying beast. Theres a sense of repetition that comes into play, since you often have to fall back and stop pressing the advantage long enough to perform a Rite of Purification. Having teammates along for the ride who can take up such duties while you are otherwise occupied allows those battles to remain suitably dynamic and epic, and is highly recommended. 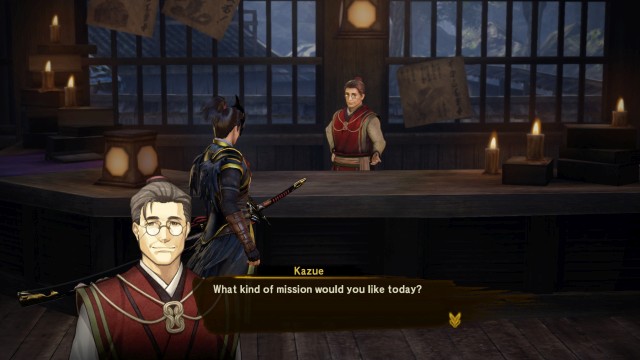 As a whole, Toukiden 2 stays true to the principles established by its predecessor, even as it seeks its own way in the open world. Many of the original Toukiden's mechanics, whether they relate to weapon use or gear progression or Mitama upgrading, do persist in this newest installment. Each weapon has been re-balanced to play to particular strengths, with two new weapons (chain whip and sword & shield) added to the players arsenal. Players that might have struggled chasing down oni with their dual knives can now easily close the distance with their demon hand.

The Mitama (or "Honorable Soul") system has also been changed, so that now it is more user friendly when it comes time to customize builds. Mitama typically fall into one of a set number of categories, and perform different abilities based on which one of the three equipment slots is utilized. Slayers are incapable of bringing their own items into the battlefield, so one Mitama slot is dedicated to the abilities that can be used (typically offensive, defensive, healing, and a fourth gambit ability that are unique to that Mitama type). There are 200 Mitama available in all, which means the random nature of loot drops still leaves much to be desired. Even by the time I had closed in on the end portion of Toukiden 2's 30-hour campaign, I had barely acquired a third of the available Mitama (and had leveled up the skills on even fewer).

Nearly every change that Toukiden 2 introduces leads to a more refined and enjoyable hunting experience. Although the combat still feels a bit on the easier side compared to its contemporaries, Toukiden 2 remains one of the finest hunting RPG franchises available on PlayStation hardware. The open world surrounding Mahoroba Village could certainly use a good Slayer like you, and youre going to want to bring along some friends...

If you enjoyed this Toukiden 2 review, you're encouraged to discuss it with the author and with other members of the site's community. If you don't already have an HonestGamers account, you can sign up for one in a snap. Thank you for reading!

© 1998-2021 HonestGamers
None of the material contained within this site may be reproduced in any conceivable fashion without permission from the author(s) of said material. This site is not sponsored or endorsed by Nintendo, Sega, Sony, Microsoft, or any other such party. Toukiden 2 is a registered trademark of its copyright holder. This site makes no claim to Toukiden 2, its characters, screenshots, artwork, music, or any intellectual property contained within. Opinions expressed on this site do not necessarily represent the opinion of site staff or sponsors. Staff and freelance reviews are typically written based on time spent with a retail review copy or review key for the game that is provided by its publisher.