Ys games have been ported many a time over the years, so it came as no particular surprise when DotEmu announced that it was working to bring Ys Origin to new platforms. Originally released in 2006 for Windows-based PCs, the game served as a prequel to the long-running series. It offered three separate stories, and together those set the scene for the events once depicted in Ys: Ancient Ys Vanished.

As a prequel title, Ys Origin played its role very well. XSEED Games published it on Steam in 2012, but seems recently to have lost its rights to the overall intellectual property (as evidenced by NIS America's announcement that it will be publishing the upcoming Ys VII: The Lacrimosa of Dana). I was worried about the change of hands when I heard about DotEmu's track record, but Ys Origin on PlayStation 4 seems to have served as the second chance that team needed. The port is very well done indeed (with a Vita version on the way, but not yet available), and the core game itself is no slouch, either. 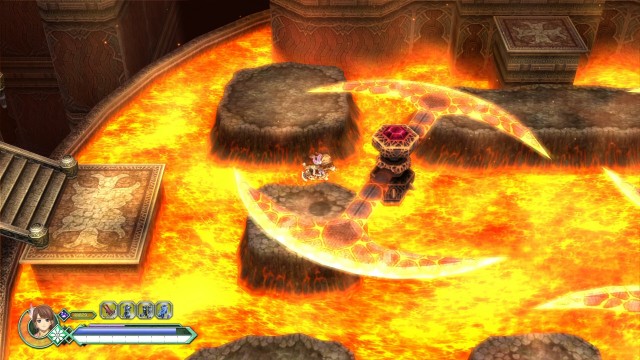 Ys Origin initially lets you play as one of two characters, with a third option becoming available once you clear the other two campaigns. Each character features a different style of play, which keeps the scenarios fresh. Hugo's game plays a bit like a shmup, with his attacks limited to mid- and short-range strikes. Yunica plays more like Adol (the hero from the main series), which means axe-based melee attacks. And Toal plays along similar lines, except with a greater emphasis on speed. Each character also can use magic skills to attack enemies, to traverse various terrain and to solve simple puzzles. There are plenty of treasures to find along the way, as well. The game doesn't so much hide them as it does lock out immediate access, until later in a given level.

A single run through the game requires you to clear 25 floors of the Darm Tower. The levels play differently for each character, but you're still advancing through the same location, no matter which hero you control. Story events vary, of course, with Toal's tale representing the "true" route. Boss fights are action-packed and challenging, especially when you play with higher difficulty settings in place. The bosses themselves are a sort of tribute to Ys and Ys II, since the menaces also appeared in those games. If you tire of the main game, there also are a Time Attack mode, a horde-style Arena mode, and a Boss Rush mode that offer extra challenge to those who seek it. 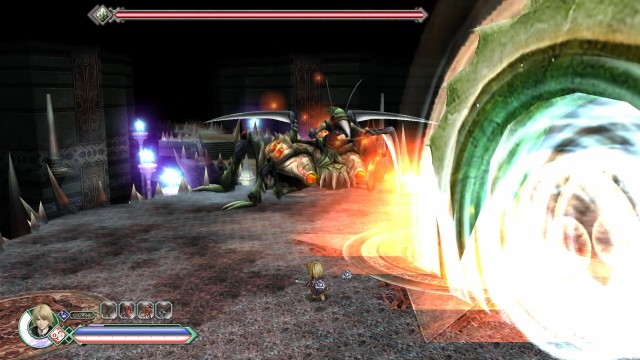 This particular port is based on the original Japanese PC release, since DotEmu apparently didn't get permission to base it on XSEED's adaptation on Steam. The one aspect of that previous port that you'll find reproduced here is the script. As a result, don't look forward to the fake language narration that previously accompanied the opening movie. And speaking of that clip, you'll likely notice an artifacting glitch as the video transitions from FMV to the game engine, but only in the one instance. There also are frame pacing issues, but those are thankfully both brief and rare.

In terms of general changes, the HUD has been slightly updated, with the stat bonus gauges redrawn so that they now appear as little icons with a circular gauge inside. This approach was likely taken to clear up clutter, so that the Vita version wouldn't bog down too much and would have more available screen real estate. Unfortunately, there's no cross-save functionality between the PlayStation 4 and Vita versions of the game, at least at present. That may change by way of a patch, once any issues with the Vita version are resolved and it is released to the marketplace, but there's really no telling. If such a patch does materialize, it might also address the other issues noted above. 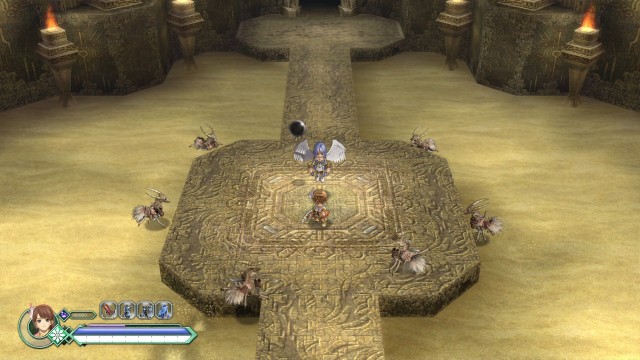 Taken on its own merits, Ys Origin is well worth playing. Series fans and newcomers alike should pick it up. For only $20 USD, they'll get to enjoy the game's pick up and play nature, some great action gameplay, and a decent story to boot. The experience comes highly recommended, even though it's not the best the Ys series has offered. And maybe, with just a little luck, your support will inspire developers to make other Ys titles available on these new platforms, as well.

© 1998-2021 HonestGamers
None of the material contained within this site may be reproduced in any conceivable fashion without permission from the author(s) of said material. This site is not sponsored or endorsed by Nintendo, Sega, Sony, Microsoft, or any other such party. Ys Origin is a registered trademark of its copyright holder. This site makes no claim to Ys Origin, its characters, screenshots, artwork, music, or any intellectual property contained within. Opinions expressed on this site do not necessarily represent the opinion of site staff or sponsors. Staff and freelance reviews are typically written based on time spent with a retail review copy or review key for the game that is provided by its publisher.