Ive played this game for over a hundred hours and Im still not quite sure what to say about it! Its certainly a weird one. But its a brilliant, good kind of weird that certain types of gamers should really check out.

HyperRogue is a mind-bending game of chess that takes place on a world thats quite unlike our own. The object of the game is to collect as much treasure as possible without getting one-hit killed and succumbing to permadeath (as the Rogue in the title might suggest) but navigating the world is a challenge unlike any youve ever met before. You know how, in real life, things appear smaller as they get farther away? Like how the horizon only looks like its a few feet long to your eyes, when in reality it spans miles? As it turns out, on a hyperbolic plane, this effect is compounded: the horizon is much, much longer than it would be in real life. Two paths that appear near to one another will take you in completely opposite directions. The world is structured in such a way that is impossible for your poor spatial senses to intuitively understand, so scrolling something off the screen will mean that its probably lost forever unless youre keeping close track of landmarks. 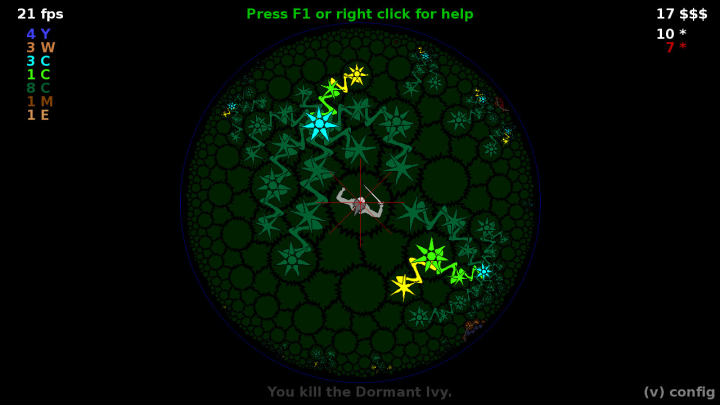 What makes the game really shine is the fact that the hyperbolic plane isnt just an artistic gimmick; its the games lifeblood. The most basic game mechanic  the combat  is only able to work because of the strange, warped nature of the games space. You can get killed in one hit, but so can enemies. So, to survive huge mob encounters, you have to funnel them down into lines so you can kill them one at a time. The trick is, in this world its impossible for two things to run side-by-side in the same direction forever  theyll eventually block one another and impede their own progress as the space compresses, so you can funnel them down just by fleeing in the correct direction. And if you cant fight, youve got a huge horizon waiting for you, and you need to know how to pick the safest direction to run.

Sound confusing? Thats only the beginning; you need to learn how to keep from getting flanked if you want to survive for more than twenty steps. Venture beyond the starting land and youll encounter some truly crazy stuff! Climb trees with infinite numbers of branches, stand in rooms that are enclosed by half a dozen parallel lines all pointed in different directions, explore circles with centers that are always infinitely far away from you, wield swords that can only be aimed by turning the world around you The programmer of HyperRogue seems to be a mathematical genius who truly understands the strange, otherworldly quirks of a hyperbolic plane and expresses his understanding through the gameplay itself, creating game mechanics that explore the differences between the game world and our normal world of Euclidian space. Thats something truly special.

The gameplay itself gets tense very quickly. Worlds spawn more monsters the more treasure you collect from them, and the core skill of the game is the ability to get out of problem situations before they become impossible. Theres also a build order strategy to consider, as you have to pick which worlds to tackle that will unlock magical orbs that will help you survive in other worlds. You'll need strategy, skill, and outright tenacity to beat some of the game's insane challenges. Fail, and you might rage hard enough to throw your keyboard out the window, but the next minute you'll be hooking it right back up to try again. 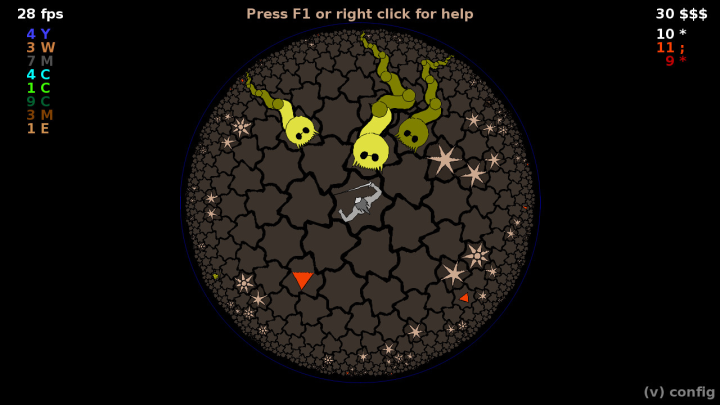 The game is still in active development, as the developer is very active in the community as of this writing, and pushes frequent bugfix patches as well as huge updates that add new worlds, game mechanics, UI fixes and ease-of-use features. The community is very friendly, with several power-players who are more than happy to help you understand the games concepts and the mathematical principles behind them.

Ill admit, as I play more and more games throughout my lifetime, Ive found that Ive come to respect and value novelty over mere quality, and HyperRogue is a monumental example of a novel concept executed perfectly. Its not just weird, it works as a game, and it works in such a way that no other game can.This is quite possibly the best proof-of-concept game Ive ever seen in my life, and Im not ashamed to give it top marks. It continues to stretch and blow my mind every time I play.

If you enjoyed this HyperRogue review, you're encouraged to discuss it with the author and with other members of the site's community. If you don't already have an HonestGamers account, you can sign up for one in a snap. Thank you for reading!

© 1998 - 2022 HonestGamers
None of the material contained within this site may be reproduced in any conceivable fashion without permission from the author(s) of said material. This site is not sponsored or endorsed by Nintendo, Sega, Sony, Microsoft, or any other such party. HyperRogue is a registered trademark of its copyright holder. This site makes no claim to HyperRogue, its characters, screenshots, artwork, music, or any intellectual property contained within. Opinions expressed on this site do not necessarily represent the opinion of site staff or sponsors. Staff and freelance reviews are typically written based on time spent with a retail review copy or review key for the game that is provided by its publisher.