Held against your will by a crazed family in the middle of nowhere, you manage to break free from a tied chair when everyone stepped away from the dinner table. With very few spots to scamper around in the kitchen and living room, you boldly step out into the hallway entrance, and since every exit is either blocked or barricaded, you proceed down a corridor. Before you can make the other end, the father suddenly and quietly pops into frame with a shovel, leaning into a wall. He's unaware of your presence, but that can quickly change within the next five or so seconds, depending on your actions from here on out. Keep in mind, you have yet to find a legit method of escape in this cramped area of the mansion.

In a typical Resident Evil encounter, you could take out this possibly-infected human with a couple well-placed gunshots to the head, all while dodging any dangerous attacks. But as the opening hours of Resident Evil 7 demonstrates, there's nothing typical about this latest romp in the menacing universe of biohazards. For a hefty chunk of the beginning sections, you're weaponless, and you have no choice but to walk around barely-lit junctions and rooms, watching helplessly as strange and bizarre things happen in a first-person perspective. You think you're immune to these moments, since the game wouldn't contemplate throwing something at you without a form of defense. But then you're caught in a freakish altercation where the only thing that can be done is block while the attacker violently lays into your hands. 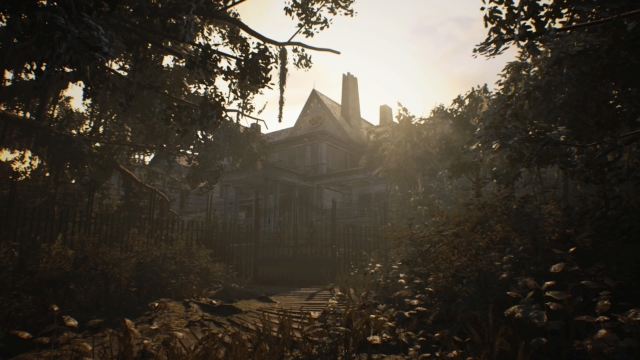 The corridor with the shovel-wielding father? You're also weaponless. I wouldn't dare explain in detail how this confrontation plays out, but I will say that, for a very, very confined location, it's ridiculous how many variations the developers programmed into this scuffle. In my opinion, it's the most important, defining moment in all of RE7, because it cements how powerless you feel when facing off against just one person. Even when you obtain a handgun for keeps, the game continually drives home the fact that shooting anything that poses a slight threat is not the best course of action. With intimidating opponents possibly lurking the corners, every ominous sound, every well-placed shadow puts you on alert, and with that comes the question of whether you should use up your limited ammunition or try running around an opponent in tight spaces.

The feeling of vulnerability becomes so seamless, that the game discreetly inserts returning mechanics and concepts as it's happening. The first time you see a green herb, it's in a trashcan, something that can be missed within the tense atmosphere. And as items are gathered, there's the realization that you have an abysmally small inventory, forcing you to think twice about habitually picking up everything in sight. Then sigh in relief when accidentally stumbling into a safe room, complete with low-key music, away from the outside terror. You'll put things away in the omnipotent storage boxes, check your health on the pulse meter, and head back out the door, which even does the classic "slow open" animation. From there, you then go on to solve a puzzle in the midst of the neverending nightmare.

However, RE7 isn't reclusive to using ideas from its ancestors, as the title borrows, sometimes unknowingly, from other horror games, most notably the first-person variety. If you've been playing first-person horror titles for the last ten or more years, then you'll realize this game doesn't particularly do anything groundbreaking with its scares and mind tactics. Without giving away any spoilerific examples, titles such as F.E.A.R., BioShock, Amnesia, and Outlast have done very similar things. Though, the most bizarre, unintentional comparison goes to Condemned, as both games have you playing a character named Ethan, who stumble around in dark places, find dead crows and CRT TVs, and fight black goo monsters. That's absurdly coincidental, even if I'm reaching.

But being conventional is not really a knock against it. If executed poorly, this could have been bad, but the fact that the game still kept me absorbed in spite of its unoriginal approach to horror means they succeeded in making something entertaining. I say that even after knowing how much it also openly references horror movies and its trappings, with The Texas Chainsaw Massacre and Evil Dead sticking out the most. RE7 unabashedly wears these tropes like a badge of honor. 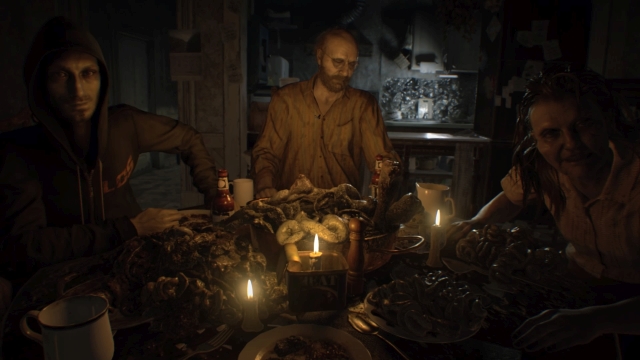 That doesn't mean this release is exempt from any major criticism, though. I understand that it's aiming for an atmospheric experience, but there were a couple moments early on where I wasn't clear what to do next in contained, scripted segments, and I ended up dying several times in confusion. It got a little tiring and broke the flow a bit. However, the biggest flaw is how the game's quality takes a noticeable dip towards the end of the journey, when it finally tries revealing pieces of the plot. Strangely, when the story takes center stage, RE7 stops trying different, interesting ways to both intrigue and creep you out. Instead, you're now Action Protagonist, literally fighting your way through monsters with enough weapons and ammunition to make you feel like a 1980s action movie hero.

I wish I can say over-the-top finales are something the Resident Evil series isn't known for, but I would be lying out of my ass. I was just hoping it was different this time... The climax is silly, an abrupt shift in tone, and introduces more questions than answers left hanging for a sequel (or DLC?), but take solace in knowing it doesn't get ridiculous to the point where you're fighting a missile-throwing, Matrix-dodging goof while punching boulders inside a volcano. If you're coming in mainly for the plot, how it concludes, and how it ties in with its predecessors, you're likely going to be disappointed; Resident Evil 7 is one of those releases where the ride is more enjoyable than the destination it's heading towards. If you don't mind that, then the game hits more than it misses, and makes me hopeful about the next main installment in the series. Cautiously hopeful.

If you enjoyed this Resident Evil 7: Biohazard review, you're encouraged to discuss it with the author and with other members of the site's community. If you don't already have an HonestGamers account, you can sign up for one in a snap. Thank you for reading!

© 1998-2021 HonestGamers
None of the material contained within this site may be reproduced in any conceivable fashion without permission from the author(s) of said material. This site is not sponsored or endorsed by Nintendo, Sega, Sony, Microsoft, or any other such party. Resident Evil 7: Biohazard is a registered trademark of its copyright holder. This site makes no claim to Resident Evil 7: Biohazard, its characters, screenshots, artwork, music, or any intellectual property contained within. Opinions expressed on this site do not necessarily represent the opinion of site staff or sponsors. Staff and freelance reviews are typically written based on time spent with a retail review copy or review key for the game that is provided by its publisher.