It's not obvious at first, but you play a monster that doesn't really think about the well-being of his tenants. This slowly becomes apparent after taking control of a landlord crow, who scrambles to tidy up... something... after two health inspector cats drop by unexpectedly. Within seconds of starting this side-scrolling platformer, the hotel you'll travel through is noticeably in terrible shape; cockroaches as tall as doors scamper the hallways, pipes are leaking green goo, boxes and piles of dirty clothes are littered throughout, and every toilet you come across is clogged. Your protagonist is a wonderful being... 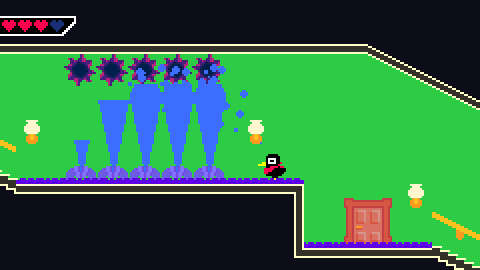 Granted, Crowtel Renovations takes on a pixelized art style that showcases cutesy, small designs of anthropomorphic characters, as well as utilizing a catchy soundtrack, so you're not meant to think too hard about the negligence caused by the "hero." I merely like pointing out weird things that get overlooked. This is really just intended to be a silly, colorful trek, guiding the bird upward through the hotel's floors and overcome, but not necessarily fix, any problems that come his way. Need to leap down a pit littered with spiked balls that exists in the building for some reason? Destroy a tenant's toilet to flood the area for a safer drop. A pesky lizard contractor is blocking your path because he's actually repairing the building? Beat him up while he's running away in fear! That'll teach him for being a hard worker.

It's an odd little game.

It's also 30 minutes in length on your first go.

Now, the problem isn't so much that it's a 30 minute adventure, since there are a lot of games, past and present, capable of doing tons of stuff in that time frame; the main issue is the lack of content within Crowtel's brief jog through the building. Despite its interesting premise of using a rundown hotel as an obstacle course, the game doesn't really throw a lot your way if you're even faintly familiar with how platform games function. There's some pretty plain structuring when it comes to hopping from one platform to another, with little to no challenge or conflict. For the first two floors (stages), the game simply asks you to dodge slow, green goo drops while platforming, jump over easy pits, or attack roaches using the crow's literal musical notes coming from his mouth.

The game uses these stale hazards so much at the start that... I didn't even realize I passed the first two of six floors until the scenery made a drastic change. What's weird is how there are actually short spurts of variety within those two stages, and despite hinting that they might be used more than once, these variations never repeat. In one instance, a giant ball of dirty clothes greets you at the top of one staircase, rolling down at a disturbingly slow pace. Jump over it and, well, never see that concept used again. Same goes for a Mega Man-esque moment where you ride bubbles up to a different part of the hotel, all while avoiding spikes. It's super brief and basic, and I was expecting more. Never again. I feel like each stage needed an "Act 2," to go more in depth with each gimmick.

The remaining stages improve slightly, where obstacles actually feel like challenges, such as having to outrun a one-hit kill snow barrage while platforming and weaving around spikes. Though, with these small improvements come the very same problems, where nothing is truly fleshed out. Before you know it, the game abruptly reaches a climax, and it leaves you with this weird feeling that there should have been more. You know what? There actually is; a bonus game unlocks, called Croaktel, where you control a frog in new environments, against new enemies, and new obstacles. But amazingly, it has the exact same issues as the main game: approximately 30 minutes in length, not enough variety, and what's there is pretty basic. 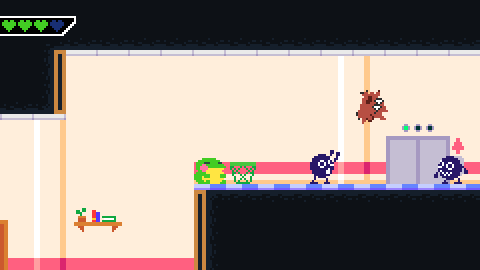 It's frustrating to point these things out, because Crowtel Renovations is not necessarily a bad idea; the game has all the right components in place for a solid platform adventure in a cute setting, but there's just not enough of anything and everything to go around. In a way, it almost feels like a proof of concept that was intended to be transformed into a bigger game. And after replaying the main game with Commentary Mode turned on, I was actually surprised how close I was with that claim. In various text boxes, it's revealed that the developer made this back in high school and intentionally left a bunch of stuff out for a supposed better flow.

Additionally, Crowtel Renovations was also meant to be a sequel to Crowtel, but the dev opted to tinker with the first game, which was originally a pay-what-you-want ("free") title on an indie game website. It no longer exists there, so the only way to play it is this version with an actual price tag. Personally, I find it difficult seeing this game as a standalone release, especially if the only new content are some bug fixes and 30 extra minutes of gameplay with the Croaktel addition, though controller support is nice. Should have been included as a bonus, an "Episode One" of sorts, to the sequel, if it ever surfaces. Or in a bundle. Having said that, the prospect of a Crowtel sequel sounds exciting, especially if it improves on everything the first game did.

If you enjoyed this Crowtel Renovations review, you're encouraged to discuss it with the author and with other members of the site's community. If you don't already have an HonestGamers account, you can sign up for one in a snap. Thank you for reading!

© 1998-2021 HonestGamers
None of the material contained within this site may be reproduced in any conceivable fashion without permission from the author(s) of said material. This site is not sponsored or endorsed by Nintendo, Sega, Sony, Microsoft, or any other such party. Crowtel Renovations is a registered trademark of its copyright holder. This site makes no claim to Crowtel Renovations, its characters, screenshots, artwork, music, or any intellectual property contained within. Opinions expressed on this site do not necessarily represent the opinion of site staff or sponsors. Staff and freelance reviews are typically written based on time spent with a retail review copy or review key for the game that is provided by its publisher.