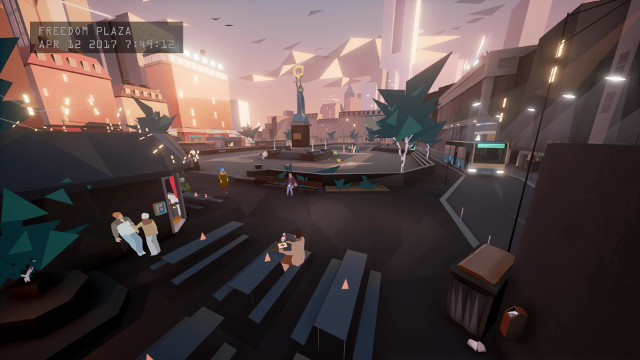 What would you do if you needed to imprison some dangerous people? Obviously, you would scour their Facebook, Twitter, and eHarmony profiles to gather evidence of corroboration between them and terrorist activist cells. At least thats how Osmotic Studios would go about it. Although that may have been a bit of a crude hyperbole, a detective has got to start somewhere with Orwell, the fascinating game where you play as Big Brother in an effort to discover the culprits behind the recent bombing events in the capital city.

Other than being the author of 1984, the story where this game gets many of its motifs from, Orwell is rebirthed as a new governmental security program created to maintain order and reduce crime in a totalitarian country called, The Nation. Being an all-encompassing program with no bounds in breaking personal privacy, Orwell has the ability to retrieve anything, and monitor anyone. Your role in ensuring the safety of The Nation is in the capacity of an investigator, one who has authority to utilize the Orwell mainframe as an unbiased outsider to The Nation. As an investigator, you must sift through all of the information Orwell retrieves to discover and submit relevant datachunks to your immediate supervisor. What you deem relevant will shape the futures of the suspects under investigation, so take great care in deciding what to submit to Orwell.

Gameplay-wise, Orwells UI behaves much like an internet browser with three major utilities: the Reader, Listener, and Insider. These utilities allow you to pull up public or private personal records, tap into phone calls and chat conversations, or remote control mobile/PC devices respectively. Throughout the countless scripts of text provided by the articles or conversations, datachunks are automatically highlighted, and notifications beside specific entries where datachunks are present help guide the player towards progression. Some datachunks will be relatively useless, such as a persons favorite color, but others will be extremely relevant to the case. Chunk by chunk, you will eventually develop fully-fleshed profiles to aid you in determining who the next person of interest is until the final culprit is found.

Using Orwell's features is the crux of the game, letting you slowly form your own opinion on who may be innocent or an accomplice, all while unraveling deeper motivations about the suspects and influential figures around you and Orwell. When you think you've cleanly profiled someone, post-incident reports will reveal multiple perspectives with conflicting beliefs that you may have never even thought of. As each episode focuses on a different character, everyone feels really well developed and sharply defined by disparate personalities and lifestyles. In addition, the more you learn about one thing, the less confident you will feel about another. 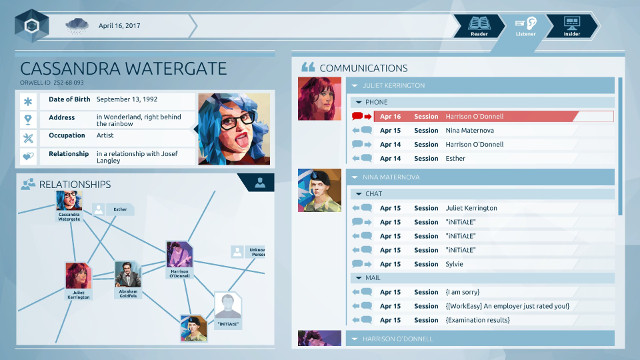 Although the detective aspect of the game begins off strong, it unfortunately slowly undermines itself due to the fact that every clue is essentially hand-fed to the player. Notifications, originally intended to be a neat and helpful feature, began to feel like a massive crutch. This created an extremely casual playstyle where I was really just along for the ride. Don't get me wrong, it is still one great journey, but the immersiveness could have been kicked up a notch by providing players a serious investigative challenge. If all hints were removed, it would definitely force me to care much more about the seemingly mundane or extraneous text for fear of relevancy. Finding the clues could be as "simple" as manually highlighting useful data. The supervisor continued to nag me about looking for X, finding X, learning more about X, but eventually the clues led me there without trying anyways. I felt like I might as well just speed-read anything without highlighted text in it to quickly move on.

In addition, certain clues must be fed to Orwell to proceed, even if I wanted to exclude it. The game seems to make a big deal about being careful what to upload to the mainframe, so why force players to make choices like that? Maybe I'm inclined to believe X is innocent, but to proceed, I must upload information that X has a military background in order to create clearance for investigation. Having this feature further supports the casual mindset of submitting anything that is highlighted and diminishes the need to read everything or even care. Dont get me wrong, the game still provides the players with a fair amount of control, since the endings are vastly different and minor paths will affect the outcome of certain suspects, but I definitely did not welcome the need to have checkpoint datachunks for progression.

The datachunk system still has some pretty neat features though, most notably in regards to data conflicts. At these moments, two conflicting statements are uncovered and only one can be submitted. You will essentially provide info that you want your supervisor to act upon. Ex. "I heard X was home last night....[phone conversation]" vs "Me and X had a blast at the concert last night [social networking site]." What you choose will relatively dictate what will happen to X. These conflicts returned a little bit of control taken away with the aforementioned checkpoint chunks. 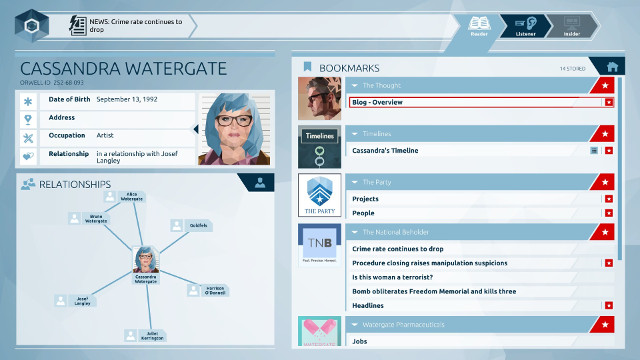 At first, Orwell seemed to have been just a more interactive visual novel or point & click game, but certain scripted scenes suddenly thrust me into Orwell's world, making me experience the exact same feelings a tech-savvy security investigator would be facing. Times where I would suddenly lose access to Orwell's mainframe, experience a cyber-attack, discover life-threatening secrets or aid Orwell during an active escape attempt. I found myself making motions and exasperations my virtual counterpart would most likely make, and the intense emotions I felt during these moments are something that would be highly difficult to forget as I walk away from the game. I can't recall any visual novels or point & clicks that have made me feel so involved in its world, seemingly shaping the final conclusion to the story.

Even though I have some gripes with Orwells progression and datachunk systems, the game is a far cry from being a failure at its attempt to tell a captivating story with novel methods. It isnt easy for a game to present information in such a way to draw strong opinions from the players, yet manage to continually make their beliefs sway back and forth. The developers, however, knew how to create false trails, dead ends, probable causes and multiple motivations yet skew them towards a believable conclusion. Furthermore, scripted moments that nearly broke the fourth wall created a unique sense of immersion and relatability. This makes it very easy for me to recommend Orwell to any fan of story-centric narratives or spy games. If youre still on the fence about this game, try the demo. It is free and contains the entire first episode - and it only gets better from there.

If you enjoyed this Orwell review, you're encouraged to discuss it with the author and with other members of the site's community. If you don't already have an HonestGamers account, you can sign up for one in a snap. Thank you for reading!

© 1998-2021 HonestGamers
None of the material contained within this site may be reproduced in any conceivable fashion without permission from the author(s) of said material. This site is not sponsored or endorsed by Nintendo, Sega, Sony, Microsoft, or any other such party. Orwell is a registered trademark of its copyright holder. This site makes no claim to Orwell, its characters, screenshots, artwork, music, or any intellectual property contained within. Opinions expressed on this site do not necessarily represent the opinion of site staff or sponsors. Staff and freelance reviews are typically written based on time spent with a retail review copy or review key for the game that is provided by its publisher.