"On that day, mankind received a grim reminder. We lived in fear of the titans and were disgraced to live in these cages we called walls."

Forget boldly going where no man has gone before -- this future is so bleak that men don't go anywhere anymore. Humanity has been confined to a single city, trapped behind three very tall, very thick walls. These massive barricades weren't built to keep the humans in; they were built to keep the towering titans out. No one knows where these creatures came from, but everyone knows they love to dine on human flesh.

Even in these dark times, mankind still has its pride. Determined to reclaim a life beyond the walls, the remaining men and women have formed an aerial military unit that employs wires, grappling hooks, and sharp blades to zip through the air and slice through the titans' bodies. It's a violent world, but that's my kind of world. Attack on Titan lets me escape from the office cubicle so that I can fly like a superhero, soaring above leafy treetops and across steampunk cities like a sword-wielding Spiderman. 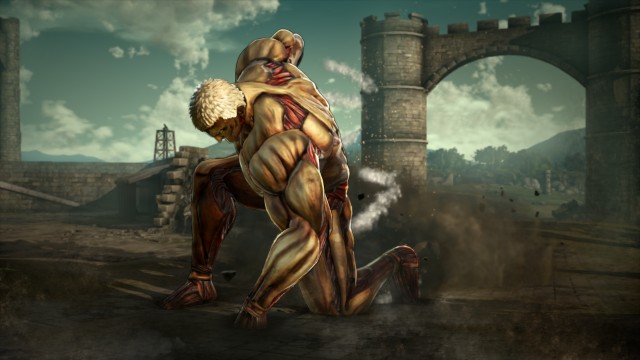 At a high level, Attack on Titan is Bionic Commando on adrenaline. Players select one of ten characters -- familiar faces from the anime series -- and set forth on a mission map to slaughter as many titans as possible. Characters can run along the ground, but that's slow and sure to be seized by a prowling titan's grasp. The primary method of movement is via wires that attach to tall objects and let players swing through the air at dizzying speeds. It's incredibly easy to control; the heavy lifting is done by the game engine so that players focus on combat instead of struggling to maneuver around this tree or that building.

Upon approaching a titan -- there could be a dozen or more on the map at any given time -- the fight starts in earnest. By pressing the shoulder button, players instruct the game engine to stop targeting tall scenery and to instead target the nearest titan. Wires can be secured to multiple body parts (easily selected with the right thumbstick) so that a player's chosen fighter can speed towards that body part and hack at it with razor-sharp blades. Do enough damage, and that appendage is lopped off. Hack at the neck and the titan dies. It's up to players whether they go for the quick kill (straight for the neck) or whether they mine upgrade materials such as "titan skin" and "titan crystals" by slicing off body parts.

There are so many ways the action could have gone wrong -- from over-complexity to camera angles -- but Koei has done a fantastic job at keeping it simple and manageable. If you've seen the TV series, then you'll be as good as Levi at slaying titans in no time at all. That's an undeniable strength of the game engine, but Attack on Titan's weakness is that Koei underestimated how quickly players would adapt. Many people say the game is too easy; I agree.

If Koei had matched the excellent controls with a bog standard lifebar, I think we'd have a better game on our hands. They instead opted for an unusual system that requires you to be grabbed by titans twice in succession. Death is easily avoided, especially since the game includes a "bullet time" dodge mechanic and automatic healing.

Attack on Titan does get tougher eventually, especially when bosses and "dire" titans are introduced. These unique enemies lend the game some variety, although it's worth noting that the game's standard enemies are deceptively varied. I say "deceptive" because they're all big and pink, so little else stands out -- but after perusing the in-game list of titan types, I realized just how much effort had been put into the enemies' designs. Care and attention was clearly put into the visuals. That doesn't mean it's pretty; like the anime series, everything aside from the titans is some shade of brown or olive. 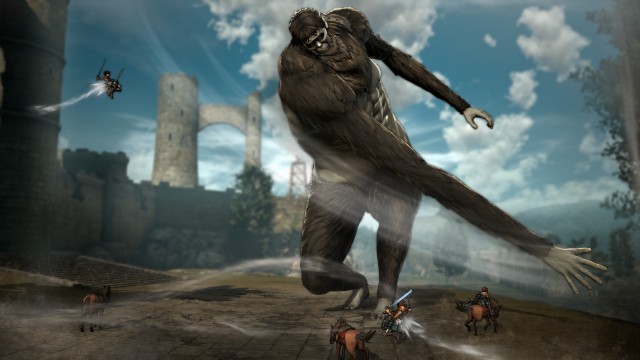 The multiplayer mode is nothing more than an online assortment of cooperative missions, also accessible in the single-player campaign. That being said, this is Koei's friendliest multiplayer front-end yet. Setting up a room and finding teammates is as easy as it is in other companies' games. There are plenty of people looking for partners, so you won't run into a complete absence of players (Fist of the North Star 2)... and you don't have to do anything ridiculous like ask to be "rescued" (One Piece) or "shout into the void" and hope that someone is listening for your beleaguered cries (Warriors Orochi 3). It's about time that Koei realized simple is sometimes better.

Attack on Titan is about as fresh as an action game comes nowadays, although it might feel almost too familiar to people (like me) who've watched the show. It's fast-paced but slow to deliver a challenge. It's visually detailed but drab. Despite my occasionally mixed feelings, I did play the game for sixty hours, I did replay every mission to unlock all the secrets, I did purchase the new DLC that just came out, and I do want to play the game again.

If you enjoyed this Attack on Titan review, you're encouraged to discuss it with the author and with other members of the site's community. If you don't already have an HonestGamers account, you can sign up for one in a snap. Thank you for reading!

© 1998 - 2022 HonestGamers
None of the material contained within this site may be reproduced in any conceivable fashion without permission from the author(s) of said material. This site is not sponsored or endorsed by Nintendo, Sega, Sony, Microsoft, or any other such party. Attack on Titan is a registered trademark of its copyright holder. This site makes no claim to Attack on Titan, its characters, screenshots, artwork, music, or any intellectual property contained within. Opinions expressed on this site do not necessarily represent the opinion of site staff or sponsors. Staff and freelance reviews are typically written based on time spent with a retail review copy or review key for the game that is provided by its publisher.