Howdy, folks. I am one of the biggest Mega Man fans you will ever meet, and I would like to take a minute to dissect Mighty No. 9. Yes, I backed the game on Kickstarter. Yes, I participated in the beta. Yes, I backed and played a few other Mega Man spiritual successors in the intervening time. Allow me to divulge what I know.

CORE MECHANICS
I'll tackle this first, because this is obviously the most important bit. Yes, you can jump. Yes, you can shoot. The basics are all here, and they feel pretty good. Where it all breaks down is the same place Azure Striker Gunvolt sputtered to an oil-on-asphalt engine-smoking halt -- the mechanical context in which said jump'n'shoot takes place.

MN9 is not about getting from A to B with skill and precision. It is not about defeating bosses and gaining powers. It is, like ASG, all about perfect runs. There's a score counter, you see. If you just shoot enemies to death you gain basically no score. In order to rack up the points, you must tag enemies with your blaster, then dash through them to kill them. This results in level layouts and enemy placements designed not around platforming challenge nor around teaching the player to deal with more and more combined hazards but around "figure out how to dash through as many enemies as possible". Beck also has infinite air dashes at his disposal, presumably to make midair dash-kills more viable. The combination of poor level design, poor enemy placement, and the ability to cross any gap effortlessly means that absolutely all levels are uninspired and unchallenging. 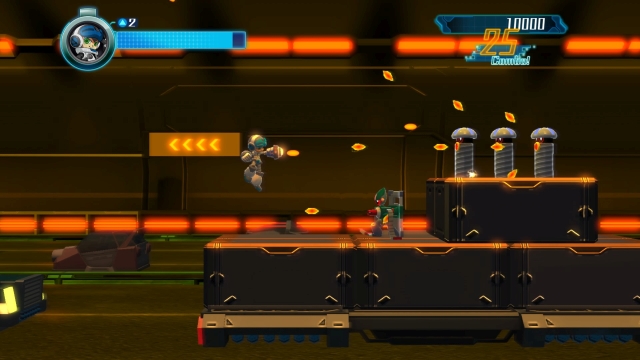 There is a good reason Classic Mega Man dumped the score counter after the first damn game -- Mega Man was never about high scores, and the fact that Inafune has gone two for two when it comes to reintroducing scoring systems does not bode well for the future of Comcept's Mega Man spiritual successors. (Even the Zero series, despite having a ranking system, weighted that system heavily in favor of skill, not arbitrary style points. Go fast, don't get hit, don't use Cyber-Elves, etc.; nothing in Zero's ranking system ever remotely approximated "build a score multiplier and rack up lots of points".)

Mega Man-esque games are about getting through an increasingly difficult multi-layered obstacle course from A to B, enduring hazards, and maybe taking a few knocks on the way. MN9, by contrast, doesn't care how good you are at platforming. Every mechanic is focused on going faster and getting more points. It's not a terrible game. It's a terrible Mega Man game. It's a speedrunner's paradise and a platformer's nightmare. The fact that two games share similar commands (jump, shoot, run to the right, use boss weapon, etc.) does not mean they are in any way mechanically similar. MN9 actively wants the player to try for a high score. It is designed to facilitate the struggle for higher scores. If the player doesn't care about score, the game's design breaks down completely -- and most of the Mega Man fans who backed this game and wanted it to be made weren't looking for a score attack. If you're wondering why there's such a glut of negative reviews, wonder no more. MN9 is literally not the product the backers wanted or paid for, and I've outlined precisely why above.

On top of the above problems, virtually nothing changed between the beta and the full release. I thought betas were for testing and making changes, but apparently, despite hordes of testers reporting countless problems (most notably complaining about the terrible level design), Battalion's stage (the only beta stage) remains exactly as it was in beta, with the addition of some extra voice work and cinematography. Even Battalion himself is exactly as he was in beta. This is unacceptable. The problems with that stage are myriad. It is not good enough as-is. Inafune still saw fit to release it. 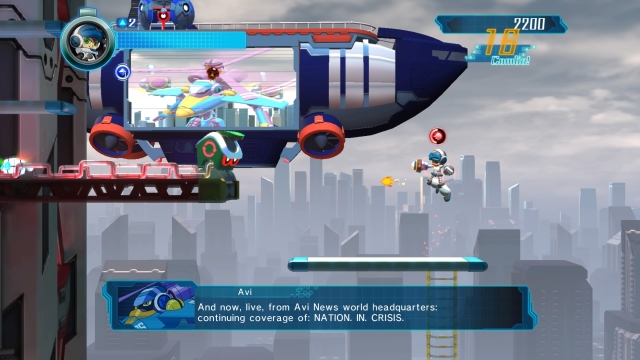 PUBLIC RELATIONS
I shouldn't need to get into this, but I will anyway. The former MN9 community manager "managed" the community into near nonexistence. She was hired via nepotism (her boyfriend was on the game's development team) despite an utter lack of PR credentials.

Dina, the community manager in question, had literally never played a single Mega Man game in her life prior to being hired (at which point, to her credit, she played a few), which in itself made her the absolute worst choice for managing a community filled to overflowing with some of the most hardcore Mega Man fans on the planet. She didn't know or understand the fanbase she was dealing with or the things they were passionate about, and since, by her own admission, all developer feedback from the official forum went through her and her alone, it's entirely understandable that a hell of a lot of backers weren't happy with the way things were being run.

It was then made apparent that Dina was a massive authoritarian SJW. She tried to get the game's protagonist genderbent solely because she wanted a female in the lead role (not because it would improve the game in any way). She actively banned people from the official forum for disagreeing with her slipshod management, no matter how polite the disagreements were. (Forum access, by the way, was a backer reward, which means this sort of thing borders on breach of contract.) She blocked countless people from the game's official Twitter account over differences of sociopolitical opinion. The list goes on and on. 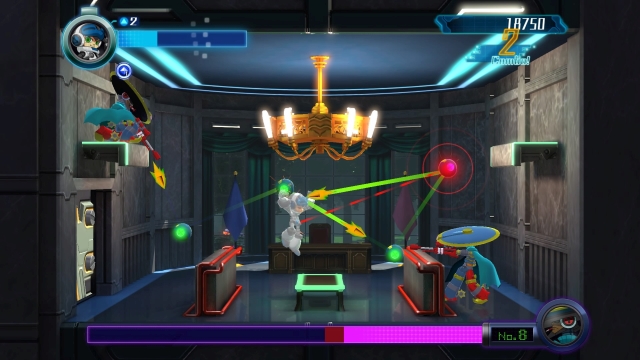 Dina was finally removed from the team, but she was let go on good terms and her dismissal only occurred after the beta period had ended and the damage was irreversible.

"SPIRITUAL SUCCESSOR" STATUS
Here's some fun data for you to consider.

Mighty No. 9 has already been beaten to the punch, ladies and gentlemen. It was produced too slowly and, compared to the initial Kickstarter pitch, it doesn't even include all the things the fans paid for. Most notably, the ability to alter Beck's individual body parts -- the one thing that would've made MN9 stand out mechanically -- has been completely cut.

Inafune has released an average platformer that resembles Mega Man on the surface but whose core strays so far from the formula it is attempting to bring back into the limelight that it can hardly be called a spiritual successor to the Mega Man franchise whatsoever. Meanwhile, a group of completely unknown developers (the folks making 20XX) has created one of the single finest Mega Man-esque games I have ever played in my entire life -- and they did it in less than half the time the so-called "Father of Mega Man" took to make his mountain of mediocrity, and with a tiny fraction of MN9's budget. (For the record, 20XX development predates the Kickstarter for MN9, as mentioned by the developers in their Reddit AMA.) 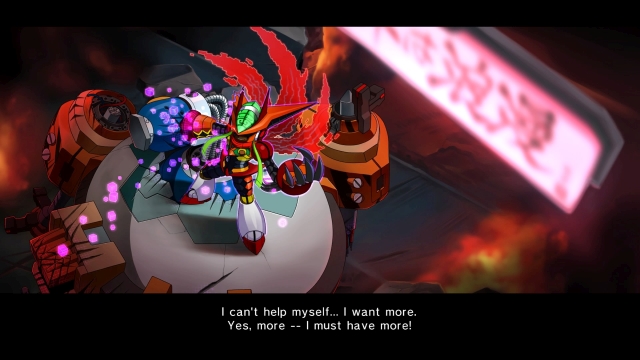 CONCLUSION
Inafune has no idea what made Mega Man great, and he has made something that bears only a passing, superficial resemblance to the franchise I love. If you're looking for a generic speedrunner/score attack, this might scratch your itch. If you're looking for more Mega Man, like most of the people who backed this on Kickstarter, avoid this game like the plague.
1/5

If you enjoyed this Mighty No. 9 review, you're encouraged to discuss it with the author and with other members of the site's community. If you don't already have an HonestGamers account, you can sign up for one in a snap. Thank you for reading!

© 1998-2021 HonestGamers
None of the material contained within this site may be reproduced in any conceivable fashion without permission from the author(s) of said material. This site is not sponsored or endorsed by Nintendo, Sega, Sony, Microsoft, or any other such party. Mighty No. 9 is a registered trademark of its copyright holder. This site makes no claim to Mighty No. 9, its characters, screenshots, artwork, music, or any intellectual property contained within. Opinions expressed on this site do not necessarily represent the opinion of site staff or sponsors. Staff and freelance reviews are typically written based on time spent with a retail review copy or review key for the game that is provided by its publisher.