I was quickly taken in by TurnOn. It bills itself as a platformer without platforms, and while thats not strictly true, there's a focus on exploration and puzzle solving that the genre isnt especially noted for. Its a game about restoring power to a darkened city, which you do by moving a grinning alien spark around power lines until its able to reactivate circuit boards and power grids.

Theres a kind of understated plot behind it all, dealing with aliens made of electricity, but its all kind of nonsensical. And thats okay, because it makes it no less adorable. Exploring a world draped in darkness and reactivating the lights is strangely satisfying. Most levels are very laid back affairs, asking you to explore until you meet certain criteria, such as saving a girl walking home alone from an angry dog, or uniting two lovers at their favourite restaurant by clearing their way. What was once something as simple as turning on lights slowly dials up in complexity. You might have to activate cranes to drop metal platforms across pits, or reactivate traffic lights to clear massive congestion. 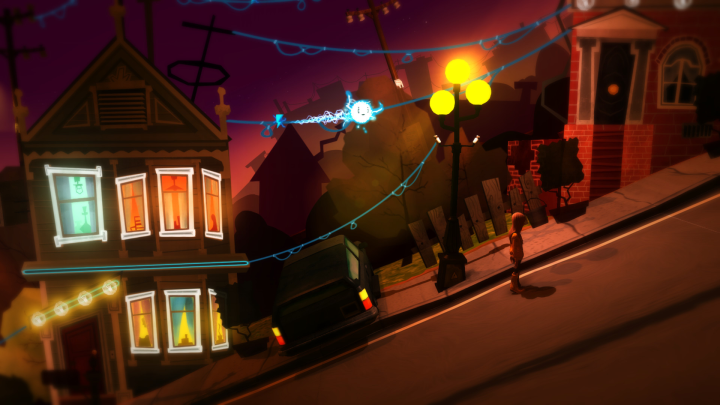 You do this by guiding your spark along any surface that will insulate itself to your charge. These lines are mostly highlighted in blue, though not always. This is unfortunate, as hitting any surface unable to hold your current results in a restart, and not always having a clear idea what you can and cant traverse does sometimes lead to frustrating deaths, or unclear progression. Still, when the process works, you can rocket along lines, trying to work out what you need to power up to complete the stage, or just explore in search of bonus objectives to complete. You dont need to reactivate that large neon sign on that massive power pylon, for instance, but why wouldnt you? Theres an out of control Ferris wheel you need to restore power to so you can save the nauseated passengers, but why not make them wait while you seek out all the little pathways required to turn on all of the attractions lights? Just ignore their wails of anguish  theyll be fine!

The moments you get to spend happily exploring are probably TurnOns greatest assist, and lend to the game's quasi-puzzle solving elements. There are no spoken words, so youre sometimes given your loose objectives via a comic-style opening to the stage, or in a speech bubble that a stranded pedestrian communicates in pictures within a speech bubble. Sometimes, you just need to navigate the chaos caused by the lack of power and work out the problem on your own. The blackout has given rise to a group of looters, for instance. You can scare them off by activating security lights, or provide power for the police to tackle them directly. Such stages work, because theyre relaxed and unhurried, letting you work out and solve the contained crisis at your own pace, giving you the freedom to explore new pathways just to see where they might lead and what you could activate.

Turn On works best in this mindset, offering no penalties for dallying at a dead-end to ensure theres no hidden path youre missing, or for dropping down a manhole just to see what might be in the sewers. Its a shame, then, when the game feels it needs to stray away from these strengths to present more frantic levels that often serve only to highlight the games shortcomings. 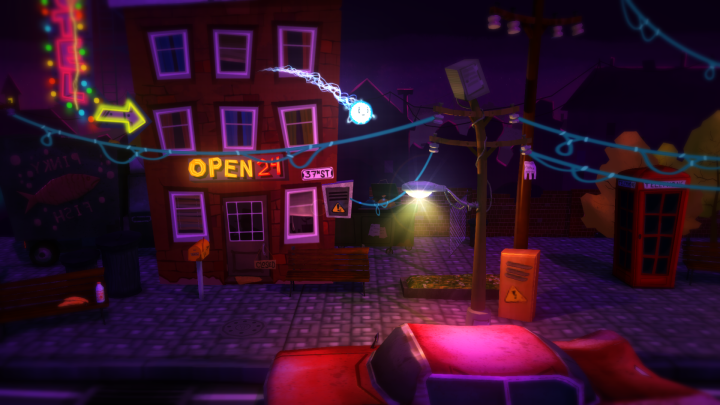 Some levels take their cue from endless runners, scrolling ever onward and forcing you to make a series of timed jumps that the control scheme is slightly too clumsy to comfortably facilitate. When not placed in any hurry, those control issues are an invisible flaw. Other levels present boss fights of a sort, asking that you take down out-of-control drones while avoiding red lightning signs that eat into your health. The last stage is lousy with these, having them drift down from the sky in rapid, unpredictable waves that are often point blank impossible to foretell or avoid. The experience stops being charming at this point and instead becomes needlessly frustrating. Staying alive long enough to complete your objective is a matter of pure luck.

When its staying true to itself, TurnOn is often wonderful, letting you meld seamlessly into the foreground to tackle a new set of power lines, or rewarding your exploits off the beaten track as your exploration unearths hidden rewards. Thats the experience for the majority of the game, which makes it easier to work through the occasional points when the adventure grows dimmer. When the game actively campaigns against you chilling out and wandering around, then its merely straying from what it does best.

If you enjoyed this TurnOn review, you're encouraged to discuss it with the author and with other members of the site's community. If you don't already have an HonestGamers account, you can sign up for one in a snap. Thank you for reading!

© 1998-2021 HonestGamers
None of the material contained within this site may be reproduced in any conceivable fashion without permission from the author(s) of said material. This site is not sponsored or endorsed by Nintendo, Sega, Sony, Microsoft, or any other such party. TurnOn is a registered trademark of its copyright holder. This site makes no claim to TurnOn, its characters, screenshots, artwork, music, or any intellectual property contained within. Opinions expressed on this site do not necessarily represent the opinion of site staff or sponsors. Staff and freelance reviews are typically written based on time spent with a retail review copy or review key for the game that is provided by its publisher.