3DS | PC | PS4 | PS5 | SWITCH | VITA | XB1 | XSX | All
PLEASE NOTE! This review was written based on the early access version of ARK: Survival Evolved. Some gameplay aspects are subject to change.

For those of a nervous disposition, Ark will not hold your hand in any way, shape or form - so much so that it's almost obligatory to look up some stuff beforehand. This makes the game slightly confusing at times, but also adds a determination to succeed that I've never felt in any game for a long time. Imagine Minecraft, on steroids, promoted to a God-like status and then add dinosaurs and you'll be partway there. I should mention at this point, that, so far, I've been playing Billy-No-Mates Singleplayer mode only.

During the first couple of hours in, I died so many times that I just wanted to feel that this game was pointless - you were so weak and helpless that even the lowliest critter would eat your face in seconds! If you tried to run away from it, something else would get you, if you stood still, the sun would kill you, if you tried to cross ANY stretch of water, you got eaten (mostly by megapiranha, but I also got my face chewed off by some sort of giant black Boa, a crocodile type thing and an entire family of Ichthyosaurs!) - BUT, as soon as my brain just wanted to give up and go home, something inside kicked in and said 'I will NOT be beaten by this game. I will survive. I will win. I will teach these sneaky 'kers a lesson!' and I carried on, determined to beat Darwin at his own game. 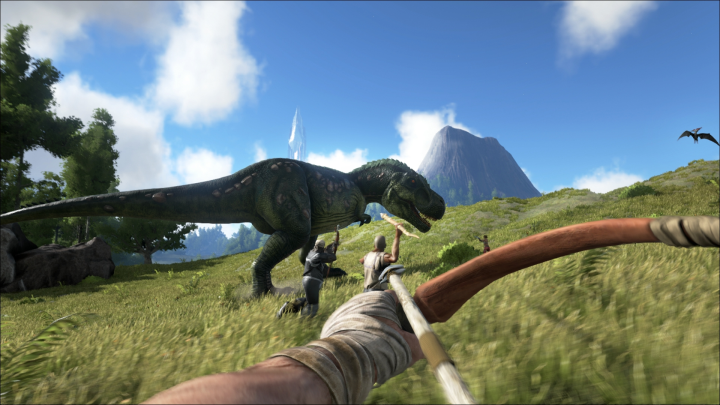 For me personally, it was a steep learning curve - yes, you could go back to the scene of the crime and reclaim your stuff, BUT the culprit (murderer) would still be hanging around, just daring you to go for it. For others, I daresay it'll be a similar experience, but it IS an experience well worth having. And it teases with promises of things to come. For those who are used to this type of game, things will probably be a little easier, but it still should provide a more than adequate test for you. This game not only provided me with a deep sense of immersion, but dragged me, kicking and screaming, to a level I'd never been before - I didn't just feel like I was in the game, I felt like I was LIVING the game. For this reason alone, I'm glad I took the plunge and purchased it.

Yes, there's still a little tweaking to be done on the optimisation front (and for my own personal view, some of the UI could be a little more organised), but on the whole, this game is worthy to be played now, as is, for the asking price. There's so much already in it, that I sometimes have to remind myself that it's early access. 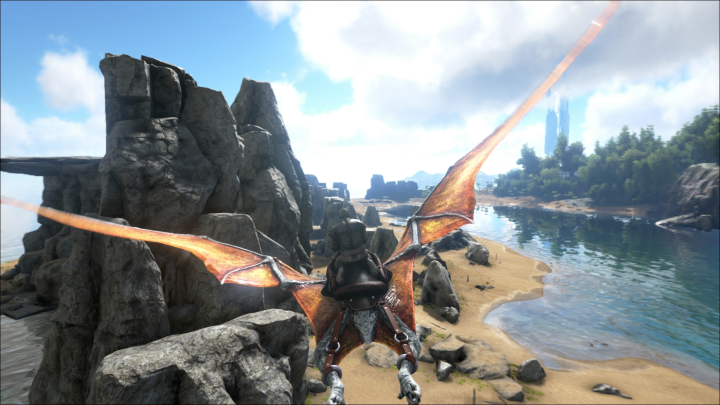 Where else could you have moments like watching the raptor who just murdered you run off down the beach, with his partner-in-crime, shaking the shirt that you were wearing seconds ago, between his teeth? Or not being able to get into the grass shed you'd just proudly built, with blood, sweat and tears, all because a Dilo has just eaten the back wall trying to get to you, then claimed squatter's rights - in your own shed (what's left of it!) - to wait for you to come back from down the beach just so that he can have another pop at you? Or having a Brontosaurus crap on your head when you dared to run through his legs?

Ark: Survival Evolved will build you up and tear you down over and over, with every single emotion in between - but you will emerge a better person for it! And that's from hours of single player and hardly scratching the surface of what this game has to offer. I can't wait to see what else this rollercoaster of a game has in store.

If you enjoyed this ARK: Survival Evolved review, you're encouraged to discuss it with the author and with other members of the site's community. If you don't already have an HonestGamers account, you can sign up for one in a snap. Thank you for reading!

© 1998-2021 HonestGamers
None of the material contained within this site may be reproduced in any conceivable fashion without permission from the author(s) of said material. This site is not sponsored or endorsed by Nintendo, Sega, Sony, Microsoft, or any other such party. ARK: Survival Evolved is a registered trademark of its copyright holder. This site makes no claim to ARK: Survival Evolved, its characters, screenshots, artwork, music, or any intellectual property contained within. Opinions expressed on this site do not necessarily represent the opinion of site staff or sponsors. Staff and freelance reviews are typically written based on time spent with a retail review copy or review key for the game that is provided by its publisher.