Considering Escape: Close Call appeared to be a cute, overhead pursuit title in the vein of the original GTAs or, for obscurity's sake, Sega Saturn's CrimeWave, I didn't think the game would have unnecessary complications. This quickly changed when I decided to take a peek at the tutorial and was greeted by a whopping 12 lessons. Then, as I was passing through each lesson, learning Burnout-esque tricks and maneuvers, such as narrowly driving past vehicles, performing dodges, and doing doughnuts, I felt somewhat dismayed; more times than not, I was hitting cars by using the iffy dodge move, and I was surprised that with the slightest bit of contact made with another vehicle, my car would immediately explode and go flying wildly into the sky, failing the lesson.

It was here that I had a brief moment of weakness, an internal conflict as I was completing the remaining tutorial lessons. I tried convincing myself that maybe this was something only contained to the tutorial, and that the actual game would function better. I succumbed to what many a gamer has been through: I tried justifying my purchase. I thought coming home after work and resuming my session for two hours would calm any fears, but unfortunately, this was when it finally registered that the game actually is pure lunacy. 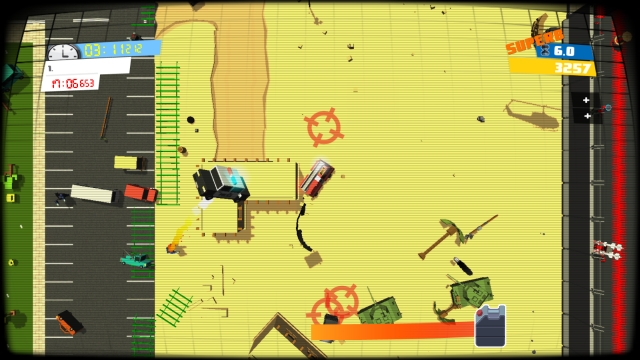 First of all, Escape: Close Call is about avoiding the endless swarm of cop cars that can end your session with a single touch, and the main objective of the game is to elude the police successfully for an entire ten minute stretch. Sounds solid. Okay, so... I accomplished the realization of this goal after six and a half hours of playtime. Let that last sentence sink in for a moment. Was it because the game is so hectic within those ten minutes, that only the most skilled are able to survive to the end? Not even close, though the game appears hard at first since you're still practicing to swerve quickly to avoid cop cars. Actually, the greatest obstacle you'll face in the game is your own fuel tank, which runs dry at an astonishing rate in the beginning. Just how fast? Less than 30 seconds.

Sadly, this is just the start of a ludicrous procedure.

The only way to gain more fuel is to buy an upgrade in the shop, with money gained by performing risky moves around the police, driving near them or under them as their exploding vehicles flip through the air. Also, collecting zombies from wrecked cars. Because the medium can't possibly go two seconds without a zombie gimmick. Basically, for every 30 seconds, you have to grind, and when you finally purchase that upgrade, it only adds a few seconds to your fuel meter. And the reason for that is... because there's nine more upgrade slots you have to purchase. Surely, filling up all the slots with hours of grinding at least guarantees a ten minute run, right? Four minutes and ten seconds.

Solution? You'll need to buy an item that, when collecting zombies, refills your fuel meter. Oh, it doesn't last long? Well, grind for more money so you can purchase the other nine slots. Zombies don't appear frequently? Grind some more to buy a spray that spawns more zombies. Don't forgot the extra slots that double and triple in price after every purchase! It's painfully obvious this is a cheap ploy to extend the game's length artificially by any way possible. I mean, I can't even begin to recall, in all my decades playing video games, a title that forced me to do mindless, repetitive grinding for hours on end just to earn the right to play the game proper.

What's worse is that Escape: Close Call isn't even worth the trouble to unlock all that stuff, since its gameplay isn't that engaging to begin with. Police AI plainly gravitates toward your position and that's really just it, no special moves or nothing on the standard cars; vehicles move faster on the second map and tanks attack fiercely on the third, the latter making it an aggravating challenge for a one-hit kill game. Questionably, gaining access to the other two maps, after purchasing them of course, is all up to you, so you can hang back in the easy first map for nine minutes. After getting the hang of steering with a gamepad (it's not keyboard friendly), and realizing the simplicity and predictability of the AI, it's all a matter of finding a comfort zone on the first map and driving around in circles. Great. Fantastic.

The thing that frustrates me the most is how this could have been a genuinely fun and challenging game had it tried to be more than a generic Unity release with store-bought assets. All the devs had to do was fiddle around with and add a bit more depth to its existing mechanics; remove the inane purchase feature, have all the power-ups available from the start, actually give the player vehicle a life meter, move the dull sub-objectives, such as doing a lengthy dodge or surviving for 20 seconds (really?), to the forefront and make them more detailed, and redesign and expand the areas to accommodate these objectives. That way, you actually have something entertaining to do during those ten minutes. That way, you actually have a video game.

Note: this review is based on version 1.34 of the game.

If you enjoyed this Escape: Close Call review, you're encouraged to discuss it with the author and with other members of the site's community. If you don't already have an HonestGamers account, you can sign up for one in a snap. Thank you for reading!

© 1998-2021 HonestGamers
None of the material contained within this site may be reproduced in any conceivable fashion without permission from the author(s) of said material. This site is not sponsored or endorsed by Nintendo, Sega, Sony, Microsoft, or any other such party. Escape: Close Call is a registered trademark of its copyright holder. This site makes no claim to Escape: Close Call, its characters, screenshots, artwork, music, or any intellectual property contained within. Opinions expressed on this site do not necessarily represent the opinion of site staff or sponsors. Staff and freelance reviews are typically written based on time spent with a retail review copy or review key for the game that is provided by its publisher.