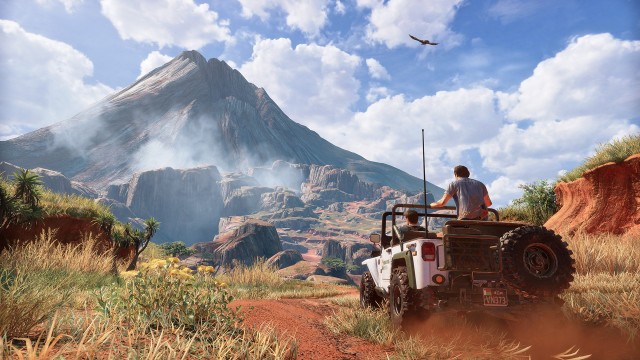 There's a sequence of events near the beginning of Uncharted 4: A Thief's End that leads to my favorite moment of the series thus far. After a flash-forward involving a boat chase, a flashback involving a prison escape, and a flash-even-further-back detailing Nathan Drake's early life as a young orphan, we're brought to present day, in which Nathan is wearing a scuba suit and retrieving cargo at the bottom of some extravagantly-produced underwater location. When he surfaces, we see that he's not in the Caribbean sea or any other exotic locale, but in the river of some unremarkable American city. The crates were full of copper wire, which, Nathan is quick to point out, isn't worth the hassle  but hey, that's what the clients want, and the money doesn't argue.

Nathan, you see, is now living a regular life. He's settled down with Elena, to whom he proposed at the end of Uncharted 3. After the salvage job is complete, he returns to a suburban house where the two eat dinner, argue over dish duty and then share some laughs over a video game. And what's on the queue tonight? Naughty Dog's breakout platformer, Crash Bandicoot. And I absolutely hate the original Crash Bandicoot, yet being forced to play it in an early chapter of Uncharted 4 stands, in my mind, as this series' finest hour, topping both the train sequence and the other train sequence.

Why? Because after years of following Nathan Drake the invincible treasure hunter with perfect hair, we're finally introduced to Nathan Drake the normal guy, who sucks at video games, doesn't want to do the dishes and enjoys a beer after an honest day's work. This is as human and relatable as these characters have ever been  shades of what I know this studio is capable of after the alarmingly mature The Last of Us.

Then Nathan's former life imposes itself upon him, and we spend the next twelve hours roaming the world, escaping collapsing buildings and gunning down an entire private military force. It's often spectacular but just as often predictable. I mean, the last three games all ended with comically loathsome villains being punished for their greed while the plucky heroes all get away scot-free, as did all four of the Indiana Jones films from which this series is obviously heavily inspired. I'm not spoiling Uncharted 4's ending per se, but I am warning you not to kid yourself if you think this is the game that finally breaks the trends. 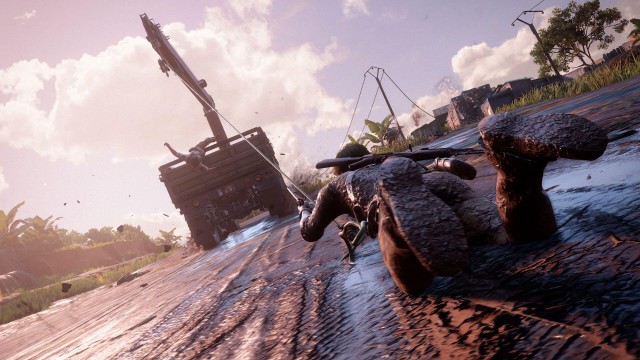 It's still generally a blast to play, though, and aided, as usual, by Naughty Dog's mastery of the latest technological leaps. We love our sandboxes these days, and the studio has responded by considerably broadening the scope of Uncharted 4's levels. For once, in an Uncharted title, there's room to breathe, and many of the game's most impressive details are tucked away in places where players aren't necessarily guaranteed to see them. When Nathan explores an archipelago midway through the campaign, there's always a very specific thing that you're supposed to be doing. But you can also just get in your boat, sail around and touch anything you see, just because. In a series known for hurriedly scooting players along from one set piece to the next, it's a welcome change of pace.

Granted, the set pieces are still there, and they benefit from Uncharted 4's graphical majesty as much as anything else. Many, many structures collapse under Nathan's feet  an occurrence so common that the other characters have begun teasing him about it  but as trite as it should be, all of those splinters and brilliant puffs of smoke put on a convincing show that's rarely less than exhilarating to be a part of. I may have known that this building was going to fall over, but it still looked amazing, and it's incredible that I managed to get out of there.

Since the second entry, Uncharted's claim to fame has been its ability to involve you in action scenes that feel like they were pulled from big-budget popcorn flicks. You should know by now whether this approach works on you, and whether you can stomach the wild goose chase of a globetrotty plot required to string all of these events together. For those willing, Uncharted 4's centerpiece is a car chase in Madagascar that's as thrilling as anything the franchise has offered before. Its constantly-shifting stakes and sweeping scope  it begins in a busy downtown district and gradually moves to the muddy countryside  would make it a blast just to watch. But to be a part of it, to have some stake in it, elevates this and many other scenes in Uncharted 4 to first-class escapist entertainment.

That said, there's a reason that the most memorable shootouts in the Uncharted series have primarily been set aboard high-speed vehicles  cars, trains, planes, what have you. The combat itself isn't exciting enough to stand up on its own, or rather, the cover-based angle just isn't a good fit for Uncharted's breezy brand of devil-may-care. In slower, heavier games with higher stakes and more vulnerable characters (like, say, The Last of Us), a cover system can work. Here, the campaign screeches to a halt every time I need to spend the majority of a gunfight hiding behind a wall. I get that cover-based shooting was an emerging trend when Uncharted first launched, but a whole generation later, it's a worse match than ever. 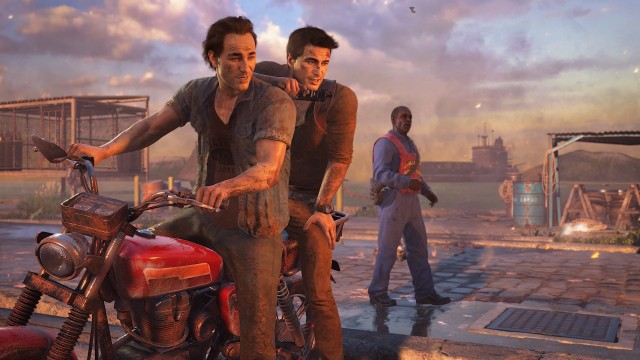 Still, Uncharted 4's biggest flaw is a new character named Sam. I don't recall Nathan ever mentioning that he had an older brother before, but Naughty Dog introduces him here just so they can tragically kill him off during the prologue. And then it turns out that they only killed him off so they could bring him back to life fifteen years later (though it's only been about twenty minutes from our perspective) and convince Nathan to return to his old line of work. Sam is Uncharted's weakest sidekick to date  essentially a second Nate, but neither as funny nor as handsome, and fitted with a distracting East Coast metropolitan accent.

He's also kind of a jerk, and his selfish actions increasingly put Nathan and company at risk, to the point that I just cannot buy Nate continuing to put his life on the line for this guy after everything he's done. Yes, I get that they're brothers, but I'm along for this ride too, and I don't want this slightly overlong campaign wasting any time making me rescue somebody who is in no way likeable, relatable or sympathetic. And I'm definitely not cool with the short shrift given to Elena, a character with whom Nathan has genuine chemistry.

Elena does re-emerge for the game's final act, at which point Uncharted 4's character interaction becomes engaging again. We're not yet at the point where video games are able to consistently convey emotions without accompanying dialog, but Naughty Dog manages it on every attempt with what's got to be the best motion capture work in the business. This is not a tech demo; this is technology achieving what most video games can't, and Uncharted 4 is all the more effective for it.

And yet it never quite returns to the level of emotional resonance I got from that simple, early scene in which a husband and wife sit at home and giggle over a round of Crash Bandicoot. I get that it's tough to take risks with a series that's found so much success in formula  though let it be said that the few new additions, namely the physics puzzles revolving around grappling hooks and winches, are actually terrific  but Naughty Dog's inability to commit to these characters as much more than Saturday morning cartoon material leaves me frustrated. I do like the series, and Uncharted 4 may be its most well-rounded entry yet. But should they decide to make another one, I think Uncharted's best days could still lie ahead of it.

If you enjoyed this Uncharted 4: A Thief's End review, you're encouraged to discuss it with the author and with other members of the site's community. If you don't already have an HonestGamers account, you can sign up for one in a snap. Thank you for reading!

© 1998 - 2022 HonestGamers
None of the material contained within this site may be reproduced in any conceivable fashion without permission from the author(s) of said material. This site is not sponsored or endorsed by Nintendo, Sega, Sony, Microsoft, or any other such party. Uncharted 4: A Thief's End is a registered trademark of its copyright holder. This site makes no claim to Uncharted 4: A Thief's End, its characters, screenshots, artwork, music, or any intellectual property contained within. Opinions expressed on this site do not necessarily represent the opinion of site staff or sponsors. Staff and freelance reviews are typically written based on time spent with a retail review copy or review key for the game that is provided by its publisher.