After finding great success with platformers like Tales from Space: Mutant Blobs Attack and the Metroid-inspired Guacamelee, Toronto-based developer DrinkBox has stepped out of its comfort zone with a new release, the (currently) Vita-exclusive Severed.

Severed is a first-person dungeon crawler starring Sasha, a young woman who wakes up in a strange world to find that her family is missing and her right arm has been freshly severed from her body. It's up to her to reunite with her family and find a way home. 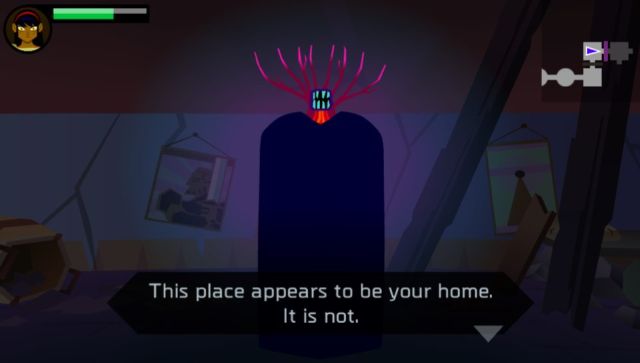 Severed's graphical style, flat and angular, may look familiar, but you won't find the humour and pop culture references to which DrinkBox fans have become accustomed. It's a dark tale set in an unsettling place, with no time for Grumpy Cats. Enemies are creepy, often grotesque, and environments are surreal. It's not quite a horror game (it's creepy, but not really scary), but it is certainly horror/fantasy-themed.

There are essentially two styles of play in Severed. First, there's the dungeon crawling. This part is pretty typical of that genre. You navigate huge mazes in a first-person perspective, searching for switches, levers, keys, and anything else that will help you clear a path forward. The game doesn't go easy on you, even from the start. The first dungeon is huge and will likely require a couple of hours to complete.

Severed's map system handily marks everything you could possibly need to remember about a room, once you find it. Colour-coded switches are clearly marked, as are doors, along with their current state (open or closed). Rooms with hidden secrets are marked by green question marks, and paths that require special abilities to uncover are highlighted with that ability's symbol. These points of interest usually lead to hidden heart and brain pieces, which are used to assemble hearts and brains that permanently increase your health and magic. It's like The Legend of Zelda, if Link ever devoured a still-pulsating organ to get stronger. 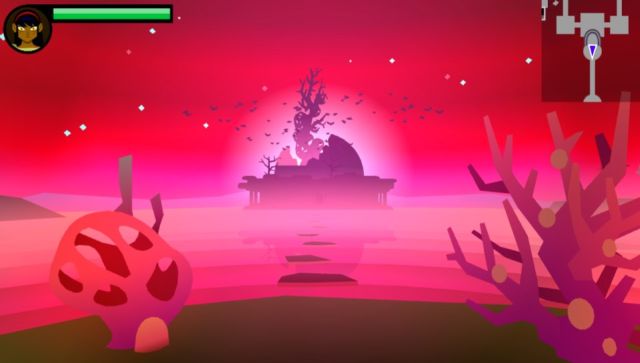 Naturally, combat is Severed's other major gameplay phase. This is where things get really interesting. Enemies appear in dungeons as white flames. If you enter a room with one, you'll be attacked by one or more monsters. There's no way to bypass these flames, so combat is unavoidable. Since foes don't respawn, however, they at least don't get in the way when you backtrack through dungeons. You focus on one adversary at a time, attacking by slicing using the touch screen. Enemies will usually guard from attacks in some way, either covering certain vulnerable parts or completely hiding their weak points. Each creature has a windup gauge that will fill as it prepares to attack. Slash in the right direction with the right timing to parry the blow, usually leaving your opponent open for a counter attack.

Combat Essentially boils down to a combination of Punch Out and Fruit Ninja, with a dash of Metal Gear Rising: Revengeance for some added flair. It's all about learning enemy attack patterns and slashing at them the right way. It's lots of fun and always satisfying, though sometimes tiring. Long slashes do more damage, meaning you'll be swiping the length of the screen often, and counterattack windows are based on time, not the number of slashes you land, so you're encouraged to rub the screen as quickly as possible. The friction actually burned me at one point, before I switched to a stylus. 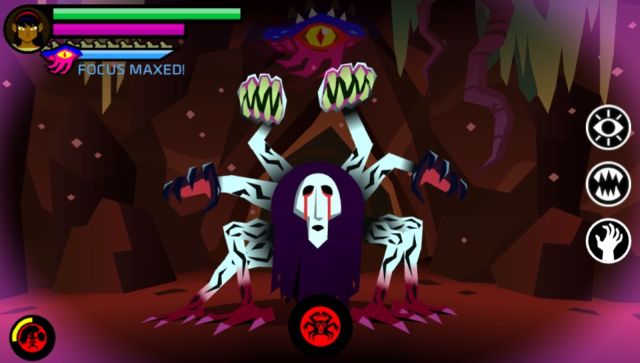 Fighting well fills your Sever meter. Defeat an enemy with a full meter and time will stop for a moment so you can slice off various body parts, such as arms, eyes, and wings, among many other types. Body parts are used for upgrading and augmenting your abilities, increasing the damage you deal or enabling you to land critical hits.

As you progress through the story, you'll find new equipment that grants access to new abilities, which can also be upgraded. Grinding is impossible for most of the game, so don't waste the opportunity to harvest as many body parts as you can along the way (near the very end of the game, you will discover a spot where it's possible to gain as many parts as you need, so even if you're not so great at severing limbs, you won't completely screw yourself out of a fully upgraded your character.)

Severed isn't a lengthy game. I spent about 6 hours reaching the ending sequence, and another hour backtracking to find all of the hidden things I missed on the journey. The experience doesn't need to last any longer than that, though. Severed is the type of adventure that carries no dead weight. It's short but densely packed with exploration and great combat. And it's a unique twist on an old genre that also happens to be one of the Vita's best exclusives. Don't miss it.

If you enjoyed this Severed review, you're encouraged to discuss it with the author and with other members of the site's community. If you don't already have an HonestGamers account, you can sign up for one in a snap. Thank you for reading!

© 1998 - 2022 HonestGamers
None of the material contained within this site may be reproduced in any conceivable fashion without permission from the author(s) of said material. This site is not sponsored or endorsed by Nintendo, Sega, Sony, Microsoft, or any other such party. Severed is a registered trademark of its copyright holder. This site makes no claim to Severed, its characters, screenshots, artwork, music, or any intellectual property contained within. Opinions expressed on this site do not necessarily represent the opinion of site staff or sponsors. Staff and freelance reviews are typically written based on time spent with a retail review copy or review key for the game that is provided by its publisher.