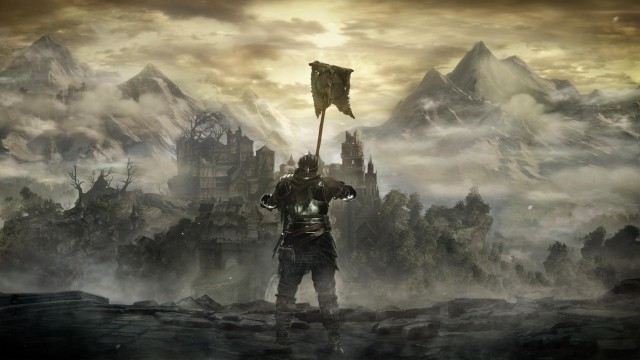 In the case of Hidetaka Miyazaki, I'm well past the point of being able to separate the created from the creator. The man has such a unique flair for layered world design that his work on the Souls series feels distinguishable even when it crosses into new franchises (as with last year's incredible Bloodborne). He stepped out of the director's chair once, and the resulting entry, Dark Souls II, is widely regarded as the weakest of the series. That shouldn't be a surprise; no one else seems to have mastered this particular formula yet.

While I'm sure Miyazaki will continue making games like this  he has, after all, raised an audience rabid for this sort of thing  Dark Souls III has him presumably closing off the franchise proper. And it feels like a goodbye. Dark Souls II used the basic terminology and mechanics of this universe to jumpstart what was more or less a completely unrelated story; the community had to dig deep to find any substantial connections at all. There will be far less theorizing with Dark Souls III, which is unambiguously and unabashedly a return to the themes and beats introduced in the original title.

In fact, the game has been out for a week as I write this, and by far the most universal criticism of Dark Souls III is that it goes overboard with fan service. The series is so famous for punishing players that it's a bit unexpected to see one go this far out of its way to please them. But lo and behold, by the second major level, we're introduced to a fellow named "Siegward," who shares many of the same mannerisms as fan-favorite character Siegmeyer, and wears the same armor, and is voiced by the same actor. This is the least subtle Souls has ever been, and it doesn't stop there. 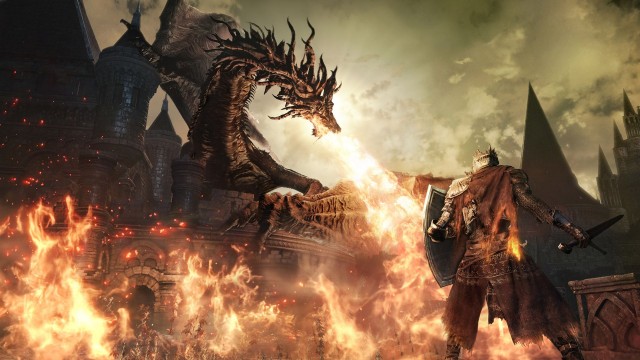 But even now that From Software is releasing these things on an annual basis, I'm still constantly on the lookout for new experiences to satisfy the craving that Miyazaki has given me, and developers are already attempting to court people like me with both big-budget affairs (Lords of the Fallen) and indie (DarkMaus, Salt and Sanctuary). So given that I buy these games looking for something very specific, Dark Souls III tests whether I can fault the team for playing it safe. To answer is that I can't, because I had a fantastic time, regardless of how much of this I've seen before.

Your objective in Dark Souls III is to rekindle the First Flame. That should sound familiar, because it was also the goal of the original game, and the parallels are not lost on From Software. It's implied that the cycle has repeated itself many times over, as you're forced this time to battle the Lords of Cinder, presumed to be the figures who have carried out your task previously. Your fate  bringing about your own destruction in the flame to restore order in the world  is so inevitable that you're no longer undead but "ashen," and your character model lightly burns throughout.

I won't spoil the specifics of when and where this is all occurring in relation to the original game's events, or even whether that information is explicitly given to us, as interested parties should know by now that discovery is one of the Souls series' greatest thrills. Although this is arguably its least cryptic narrative to date, From still relays most exposition through easy-to-miss details, so that the full picture is only gleaned through close examination and, as always, a strong community effort. It's all still being pieced together as I write this, but I can confirm that at least one of the most heavily debated questions hanging over Souls lore finally has a definitive answer. 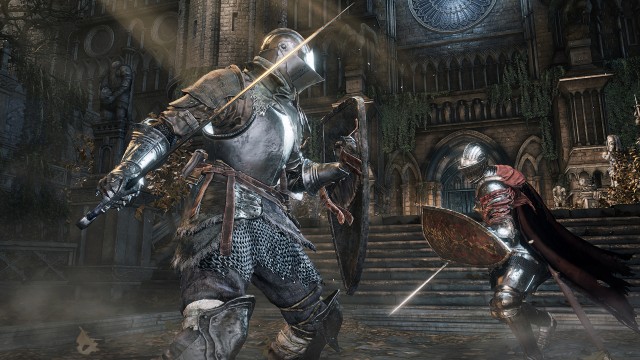 Ultimately, though, the connections to the first Dark Souls aren't what make this absorbing. It's the structure and world design, which I'm happy to report are a major return to form after the jumbled, nonsensical layout of Dark Souls II. One of my least favorite things about Drangleic was its lack of geographical consistency. You'd climb a windmill, take an elevator up and find yourself in a castle partly submerged in the earth. Or you'd clear a seaside area, take an elevator down and find yourself at the same water level. That's how most games work, I guess, but it contradicted the fiercely interwoven nature that made Lordran one of my favorite settings in games. Drangleic played like a handful of deleted levels hastily glued together with little rhyme or reason.

That's not the case with Dark Souls III. Most of the game is set at the base of the enormous castle of Lothric, which can be seen from nearly every location and serves as a constant visual analog of the player's place in the world. In classic form, you can spot distinctive landmarks from neighboring regions; in fact, climbing the massive bridge that extends from Lothric reveals just about the entire layout of the game. My fondness for this sense of verisimilitude dates back to Ocarina of Time and the experience of first stepping out into Hyrule Field, seeing the silhouettes of key places and learning that you can actually travel to any of them. It makes the world feel organic and meaningfully designed. Although Dark Souls III's structure is considerably more linear than that of its predecessors  there's a pretty set order in which you're supposed to be doing things  actually exploring and unearthing is just as rewarding as it ever was.

As smoothly as it flows, though, Dark Souls III still feels like a sort of greatest hits collection where its individual levels are concerned, in that so many of them play as obvious homages to iconic bits from previous Souls releases. That's generally great, but a few staples of this series have begun to wear out their welcome. We get another swamp level that forces you to wade through poisonous water, another set of catacombs full of respawning skeletons, and a blatant recreation of the bow sniper run that seems to misunderstand why that sequence is so famous. 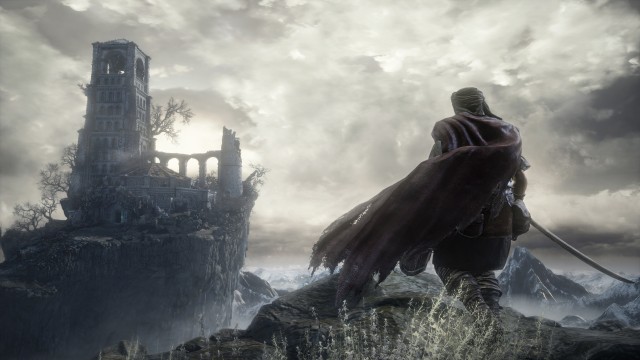 Most of the level design is brilliant, though, peaking with the sprawling Lothric Castle itself, which is not only the best opening area of any Souls release to date but an equally engaging finale, when you return late-game to visit all of the places you saw in the skybox but couldn't reach the first time. Video game settings just don't get much prettier or more intricate than this place, nor are they much more intimidating  not only is it full of dragons, but literally the very first chest I found in Dark Souls III turned out to be a mimic. I'd briefly considered checking to see if it was breathing before deciding, nah, not even From would do that. They did. It's good to be back.

Speaking of which, yeah, Dark Souls III is pretty difficult  demonstrably more so than the second game in that I was actually able to bring down very few of the bosses on my first go. It's not just a parade of big bipedal dudes in armor this time, either, and even the bosses that do look typical at a glance present their own twists. Very few of these encounters end the way that they start.

The trouble again, if it can be called that, is that it's very familiar. Bloodborne, liberated by a new setting, removed shields and limited builds almost entirely to physical output. It forced players to learn a very specific approach. That game's influence is felt here in that combat moves notably faster than in previous games (and the window of invincibility for dodging is much more generous). For the most part, though, Dark Souls III gives us very little to master in the way of new techniques, aside from a weapon skill system that most players will ignore... until they reach an awkwardly-handled boss that can only be defeated using a special ability from a specific sword. 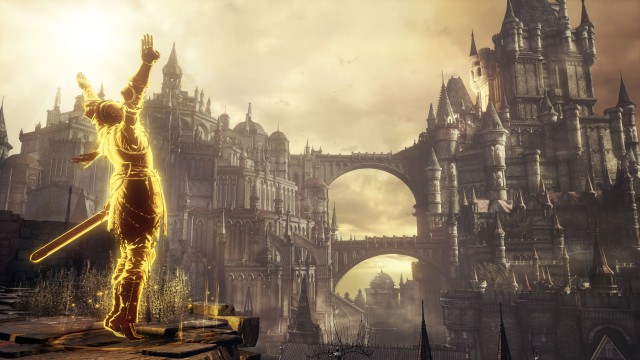 Still, this is actually the first Souls game for which I never once needed to consult a guide. (For the main quest, at least. There's one secret area that you will never find without help.) I get that unraveling these things is a community effort, but it's nice to move past the nonsense like having to light a random piece of scenery on fire to drain a boss arena of poisonous goo. I'm so accustomed to Souls gameplay that I can't put myself into the shoes of a first-timer, but Dark Souls III is perhaps the first entry that I could see myself not giving up on if I didn't have an internet connection.

So while Dark Souls III is transparently built as a crowd-pleaser, it does feel like an amalgamation of the series' best attributes  the distinctive stamina-based combat, the simultaneously inviting and foreboding world, the variety in boss design and the near-constant challenge. The only concrete flaw, though it is a major one, is the performance. Dark Souls II was unquestionably the most polished game in the series, and despite the many positive things Miyazaki brings to this series, technical proficiency does not appear to be one of them. I've heard the framerate dips are even worse on consoles, but they're an inescapable entity no matter how you're playing this.

The hiccups don't break the game, though, and that's a relief  what a shame it would have been for Miyazaki to return to this franchise only to send it back off in a state of disrepair. Instead, Dark Souls III feels celebratory. If this truly is the last Dark Souls, I couldn't imagine myself being much more satisfied with the way it's going out... as long as, one way or another, Miyazaki promises to keep making games like this. No one does it like he does.

If you enjoyed this Dark Souls III review, you're encouraged to discuss it with the author and with other members of the site's community. If you don't already have an HonestGamers account, you can sign up for one in a snap. Thank you for reading!

© 1998-2022 HonestGamers
None of the material contained within this site may be reproduced in any conceivable fashion without permission from the author(s) of said material. This site is not sponsored or endorsed by Nintendo, Sega, Sony, Microsoft, or any other such party. Dark Souls III is a registered trademark of its copyright holder. This site makes no claim to Dark Souls III, its characters, screenshots, artwork, music, or any intellectual property contained within. Opinions expressed on this site do not necessarily represent the opinion of site staff or sponsors. Staff and freelance reviews are typically written based on time spent with a retail review copy or review key for the game that is provided by its publisher.