Right off the bat, the most noteworthy alteration Witch & Hero II makes to its predecessor's tower defense structure is how it doesn't waste any time throwing stuff at you. With the first stage, enemies appear in bigger numbers, and you can already collect blood from downed foes, which can fill Little Witch's power meter, allowing for temporary magic attacks. By the time the third stage is reached, the screen is flooding with gangs of blue blobs, killer rabbits, and three giant bosses, in spite of Little Hero's efforts to cleanse the area. From there on out, the tide never dies out, continuing throughout the 30-stage journey to liberate the original Witch and Hero. In comparison, the first game's opening stage feels like a sluggish crawl, magic powers aren't introduced to the defenseless Witch until the fourth stage, and the pacing only truly gets aggressive a little afterwards.

Okay, that's it for the positives...

Sequels are an opportunity to fix what didn't gel with previous iterations, whilst improving and expanding on what actually worked, and in capable hands, can elevate them into memorable, lovable products. Witch & Hero II, on the other hand, is an unfortunate example that simply adding new mechanics isn't going to make the game better. The most significant detriment comes in the form of Little Witch's ability to walk around the screen with the A/B/X/Y buttons, in conjunction with Little Hero's analog/d-pad movement. This is unusual in itself, since Little Witch is the "tower" in a tower defense game, so the player is basically moving around a goalpost that occasionally shoots back. 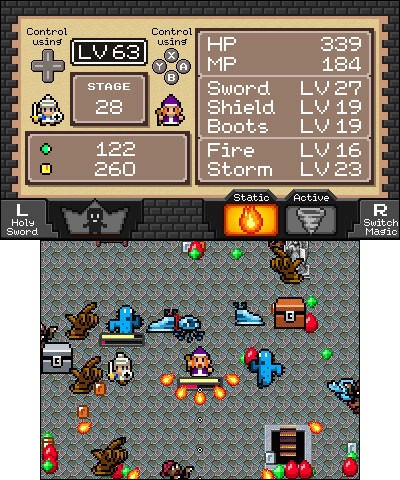 The concept could've worked under some kind of guideline, but Little Witch is allowed unrestricted movement, with the only "Achilles heel" being her slow speed. Not only does this easily enable the character to move to a different spot when things get too crowded, with Little Hero acting as a bodyguard, but can also manipulate enemy movement into a herd-like mentality, minimizing the challenge. Magic powers pose a greater risk towards enemies, too, since you can hold out due to no longer being stationary, then unleashing when several opponents are lined up. Not ending there, she can also break open chests with a single touch, something Little Hero has to do with multiple hits among a horde of creatures. To top it off, when Little Hero is briefly knocked out, he recovers health faster when she's standing on or close to him...

To say that Little Witch is frighteningly overpowered would be the gravest of understatements. Like, severely overpowered. She is soooo overpowered that, when you receive the Holy Sword after stage 10, an ability that allows temporary super strength for both protagonists, it's not really necessary; Little Witch's mere presence and the gradual upgrade of weapons, armor, and magic powers are enough to get you by a solid 20 to 25 stages without additional aid. I wish that was an exaggeration, but the fact I was able to plow through 28 of 30 stages before finally losing, due to overconfidence in using Little Witch, says a lot about this game's shaky design.

The absurd contrast between the two games is depressingly startling. Witch & Hero is the most basic of tower defense games, yet manages to incite legitimate threats that require careful, calculated strategies using what little mechanics are available. Witch & Hero II, however, is a tower defense game needlessly bloated with mechanics, defusing any potential challenges and strategies in favor of sterile victories. There's an Advanced mode accessible through an input code, but like every other new thing about the game, it seems to miss the point; enemies have more health, meaning stages last longer because Little Witch has to circle the screen nonstop while Little Hero passes out every two seconds. The epitome of fun.

I'm sure the devs meant well when they set out to make a better game than the first, and there are gamers out there who will take a liking to these changes, but I feel they went about it the wrong way. I entered an optimist, but in the end, with abundant flaws present, I left fearing for a Witch & Hero 3...

If you enjoyed this Witch & Hero II review, you're encouraged to discuss it with the author and with other members of the site's community. If you don't already have an HonestGamers account, you can sign up for one in a snap. Thank you for reading!

© 1998-2021 HonestGamers
None of the material contained within this site may be reproduced in any conceivable fashion without permission from the author(s) of said material. This site is not sponsored or endorsed by Nintendo, Sega, Sony, Microsoft, or any other such party. Witch & Hero II is a registered trademark of its copyright holder. This site makes no claim to Witch & Hero II, its characters, screenshots, artwork, music, or any intellectual property contained within. Opinions expressed on this site do not necessarily represent the opinion of site staff or sponsors. Staff and freelance reviews are typically written based on time spent with a retail review copy or review key for the game that is provided by its publisher.