I was fifty hours into Dragons Dogma: Dark Arisen, and feeling pretty pleased with myself. Most of the game lay beaten. My cliche humble fisherman protagonist had slowly developed into a warrior of legend. He had felled many a mighty beast, first with panicked desperation and then with arrogant swagger.

His first major encounter pitted him against a wounded cyclops who had wandered into the encampment situated just outside his little village. It wasnt like the fisherman was forced to take on the threat alone; he had access to his own platoon of three NPCs by then. The encampments modest garrison were also eager to see the monster fall. Did I mention the beast was wounded? Mortally so. Its health lay in slivers. All that remained was to deal the finishing blow. Into the fray I crept, instructed by the game to latch onto the beast, and from there to climb up to his head and stab him in the face. The cyclops was not keen on letting that happen, though; he didnt care that he was little more than a gussied up tutorial. He swung his massive club once, and that was more than enough to send me tumbling over the scenic cliff behind me, into sparkling blue waters and a "Game Over" screen.

The next attempt went somewhat better. I lingered on the edge of the battle, ignored the on-screen prompts to climb the sodding thing, and plugged arrows into his one eye until finally he fell over and stopped twitching.

Fifty hours of play later, though, meant I no longer needed to show such timidity. By then I possessed mad archery skills, was able to unleash volleys of ten arrows at once. A few such bursts would leave even a mighty cyclops with its tusks splintered, its eye put out and its life ended. As I said, I was feeling pretty smug at that point, and why wouldnt I? Cyclopses? Scoff! I had set ablaze griffins from the skies, slashed them to ribbons while they tried to stop their wings from burning. I had walked through abandoned mines, putting the undead to sword and slaying a trio of ogres who (I soon learnt) become significantly tougher once sexually aroused. Which, I suppose, made my harem trio of lady warriors ill-advised traveling companions for that particular fight.

Only one of the girls was of my own creation, though. Some ways into the game, youre tasked with creating an NPC partner who will remain with you for the adventure's remainder. I created a tiny loli-mage that was supposed to compliment my towering strider protagonist, but an additional couple of party members are recruitable on top of that. In fact, theyre the allies of other Dogma players. You can hire them at will, taking on warriors of similar levels and below for free, or spending rift (currency gained by others hiring your own NPC) for varying degrees of over-leveled overkill. These companions called "Pawns," and they learn on the job.

Maybe some Pawns find themselves facing off against a wolf pack, and one of them happens to introduce the little buggers to a spot of fire. Theyll notice the critters dont much care for that. So theyll store that information away, and act upon that knowledge when they have the chance. Hiring other peoples Pawns helps them as much as it helps you for just that reason; they gain no levels and obtain nothing aside from any gifts their employer might choose to bestow upon them, but they come away from dangerous encounters with fresh knowledge. Because people hired her quite regularly, my own Pawn often knew about quests Id not even started yet, meaning she was able to offer me advice, even guide me to locations I would have had to otherwise seek out on my own. 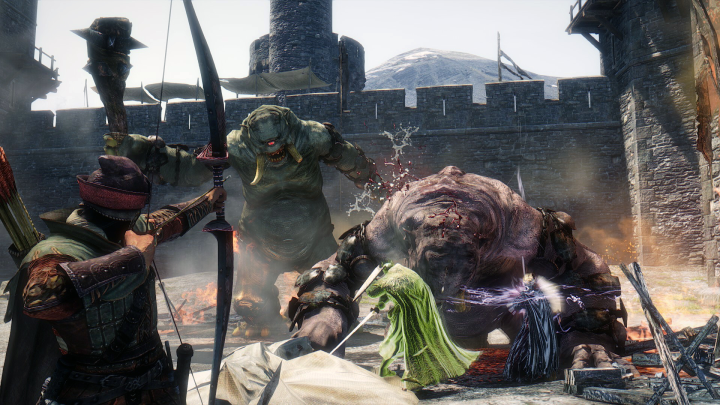 Instead of finding wolves, you might instead stumble across a nest of Saurians, which is fancy talk for "lizard people." Well-trained Pawns know that if you hack off their tails, the monsters drop their weapons in a panic, which stops them from blocking everything you throw at them. Those same Pawns might also learn that if you set those foes on fire, theyll stop, drop and roll, giving you ample time to put the boot in. They might even learn that pelting scaly bodies with ice spells eventually freezes them solid, allowing you or an ally to smash them into little watery bits, so long as you get to them before they defrost.

And the Pawns have plenty of time to learn this things, since Dogma is a large game spread over a sizable map that its quite insistent you explore fully. Though the Dark Arisen update makes exploration easier by providing collectible portals you can strategically place around the map to use as quick travel points, it really prefers that you go everywhere on foot. Such journeys are often long and fraught with danger, relying on Dogmas night/day cycle to mix up the threats. Pedestrian worries like bandits and roving goblin gangs threaten travelers during the day, while the undead are more likely to be found seizing the night. Initial exploration into unknown territory is often an adventure in itself, with long forgotten camps or razed strongholds to sometimes stumble across and explore. Or you can just wait for a quest to come along and force you in that direction. Theres always some excuse to head west, but moments when you find something new are exhilarating. Discoveries bleed into one another, daring you to risk pushing a little further into the unknown.

Fifty-hour me had outgrown all of that, though. Fifty-hour me had explored the entirety of the map, had stormed hobgoblin strongholds and used the mounted ballista situated atop cliff faces to peg explosive bolts at the small army waiting to ambush him. He had chased off a magically resurrected cockatrice, and only got half his traveling party petrified in the process. He had tracked a gargoyle down to its hidden lair high in the mountains because the bloody thing had stolen someone's post!. He sat on the edge of game completion. There were just a couple of missions left to go. It was time to venture to Bitterblack Isle. 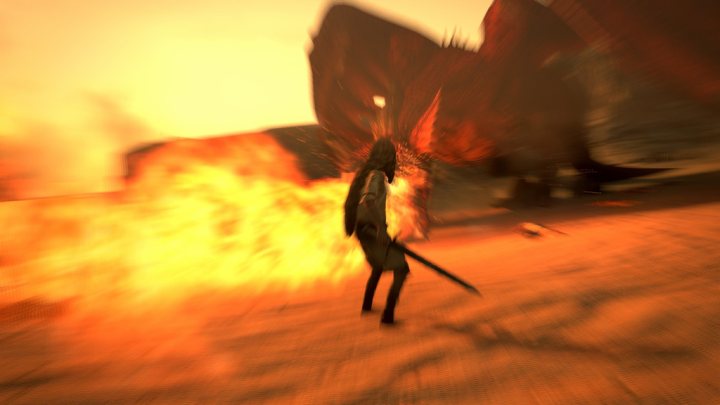 The island houses a new, multi-layered labyrinth that makes up the bulk of the Dark Arisen expansion. Its supposed to act as a post-game challenge, to provide high-leveled, post-game parties something new to conquer. And by that point, that was surely me. The game was beat in all but name, right? I sauntered in. And then I died.

I died quite a few times, actually. The first time around felt a little unfair, when Death himself physically manifested in front of me and quickly ended my life with a single swing of his scythe. My second attempt worked on the assumption that I should probably avoid the spectral bastard until he wandered off. That approach seemed to work. I explored further, finding hardier foes that still fell to my experienced team without much complaint. Until they didnt.

An undead king and a posse of sorcerers spawned after I broke into a treasure room, flanked by massive zombies the likes of which I had not yet seen. I vanquished them after some struggle, then died to the twelve-foot skeleton Goliath that lurked just down the hall. Another attempt saw the massive archer I had hired as a backup Pawn open an innocent looking chest and then get immediately swallowed up by what Im sure the game would have called a Mimic, if that wouldn't have qualified as blatant copyright infringement. We tried to help him, but the damn thing flailed our allys corpse around with enough force to either kill us, or knock us flying into a nearby body of water to quietly drown.

These were all threats a determined warrior could overcome, however. The skeleton was beaten down, the chest was ignored, and progress was made. Deeper and deeper into the halls I crept, carefully taking out little pockets of danger. I walked through a room where the undead rose and dead bodies wrapped in hemp swung from chains affixed to the ceiling. I picked my way through the rotting corpses of large animals that had been somethings lunch. I found that thing. He was a captive Gorecyclops. 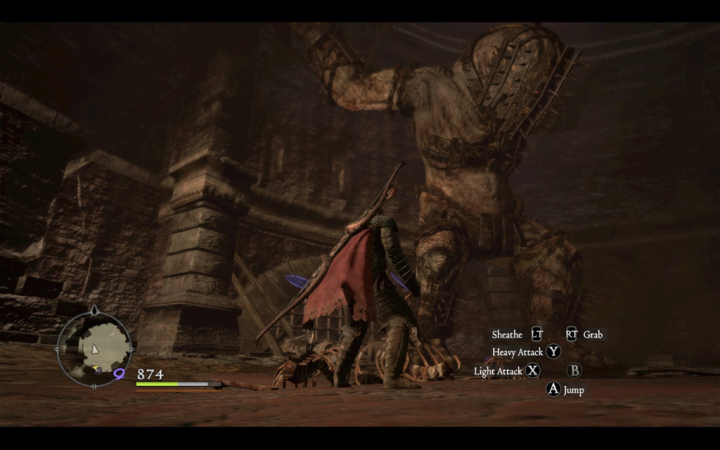 Id been killing different varieties of cyclops monster as an afterthought for ages by that point. There was one at the start of the delve that I slaughtered on my own with arrow strikes in seconds, without the need for my Pawns to even get involved. I was confident. Id weathered and overcome all the other threats that came at me, but I was also open to courting disaster, to being overpowered in a fair fight. So, we attacked, and I wasnt prepared for what happened. The giant cyclops ignored me. It writhed every now and then under my four-pronged offense, but out of irritation more than pain or anger. Its massive, massive health bar hardly flickered.

Dejected, I left him chained to the wall and climbed to the top of the chamber, where my objective--a key to open new paths into the labyrinth--waited for me. I used it to further explore the depths, just barely getting by. I even left the island to return to mainland and complete the game proper, and I trudged through the gut-punching post-game revelations. I found that cockatrices nest and rooted him out and defeated him. A chimera--a bloody chimera--had taken residence on the small beach outside my home town, where nothing more dangerous than seagulls once existed. It, too, fell. I found an evil eye lurking in the basement of the world. "Its a bootleg Beholder," said I, before it started thrusting tendrils into the floor which reappeared elsewhere to spit spells and fury. I took it on anyway. The battle wasnt an easy one, but things didnt end well for my adversary. 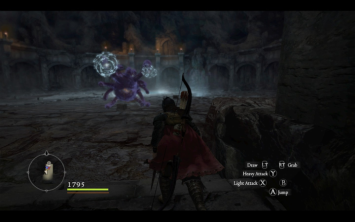 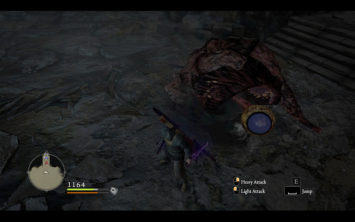 I was eighty hours into Dragons Dogma: Dark Arisen, and I was feeling pretty pleased with myself. But I was still finding things to ram that sense of self satisfaction right back down my throat...

If you enjoyed this Dragon's Dogma: Dark Arisen review, you're encouraged to discuss it with the author and with other members of the site's community. If you don't already have an HonestGamers account, you can sign up for one in a snap. Thank you for reading!

© 1998-2022 HonestGamers
None of the material contained within this site may be reproduced in any conceivable fashion without permission from the author(s) of said material. This site is not sponsored or endorsed by Nintendo, Sega, Sony, Microsoft, or any other such party. Dragon's Dogma: Dark Arisen is a registered trademark of its copyright holder. This site makes no claim to Dragon's Dogma: Dark Arisen, its characters, screenshots, artwork, music, or any intellectual property contained within. Opinions expressed on this site do not necessarily represent the opinion of site staff or sponsors. Staff and freelance reviews are typically written based on time spent with a retail review copy or review key for the game that is provided by its publisher.