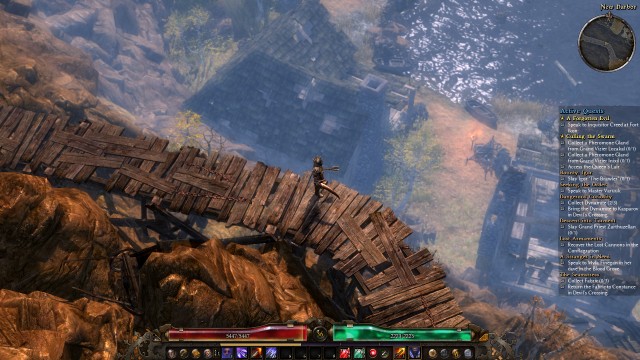 Logic would decree that the most stressful moment in any hack-and-slash RPG would come toward the end, as you're facing down some tentacled monstrosity poking out of the earth, and it's about to kill you, and you've got more potions, but you just healed and the next one isn't ready yet. Action-RPGs always insist on giving potions cooldowns, don't they?

Yet, even faced against Grim Dawn's many arcane horrors, the game's most sweaty-palmed moment for me came right at the beginning, when I had to choose a class. Diablo II, which set the groundwork for hacky-slashy clickfests such as this, put an emphasis on online co-op and team dynamics. Every class had a unique role in combat, and thus every person was essentially playing a different game (though, yes, all of them involve quite a bit of clicking). So when I'm asked whether I want to play as an Occultist, a Demolitionist or a Shaman, I go into a panic. Will I pick the wrong one and ruin the next 30 hours for myself?

The people at Crate Entertainment, themselves veterans of this genre  the company was formed by ex-members of Iron Lore, the team responsible for Titan Quest  seem to have thought of this, because when you reach your tenth level in Grim Dawn, you're allowed to choose a second class, henceforth mixing and matching between the two skill trees.

I was intrigued, for example, by the Demolitionist mastery and its leaning on fire and explosives, but turned it down as my primary class since they're best with guns, and I tend to gravitate more towards melee fighters in these games. You gotta get in the mud, you know? It robs hack-and-slash RPGs of some of their cathartic pleasure when you're not actually cutting through these hordes of enemies by hand. I chose Nightblade, the rogue class, and got ten levels' worth of amusement from its dual-wielding bonus before being told that the firestarter skill set wasn't off the table yet. 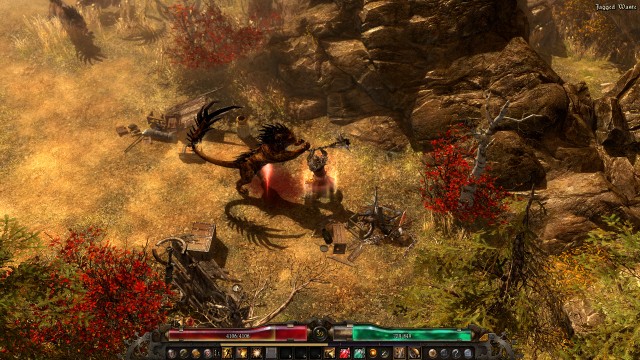 So now Grim Dawn calls me a "Saboteur." I went from teleporting at short ranges and erecting barriers of floating swords to, uh, still doing all of that stuff but also having the ability to construct traps and mix Molotov cocktails. Every class has several dozen skills, each with up to a dozen levels of mastery. That flexibility, the openness to course-correction in this dual-class system, results in Grim Dawn having some of the most rewarding character building I've ever encountered in an ARPG. These games have a reputation for being a load of mindless clicking, but it's a weak argument once you've seen how the choices you make in Grim Dawn drastically affect your play style.

That's one of Grim Dawn's two most distinguishing features, the other being its setting and tone, that of gothic horror. The game's title refers to a specific event that unleashed an undead plague and sent the world plummeting into relative anarchy, but it more broadly references the game's mood: dark, bleak and somewhat hopeless. While the writers had a bit of fun dipping into Victorian naming conventions  you fight "flesh hulks," collect "corpse dust," explore a place called "the Necropolis," and so forth  this is gloomy stuff, where most villages are in ruins and the remnants of civilization are continuing to collapse under the weight of famine, mistrust and futility.

The plot itself deals with otherworldly beings that have given rise to dark magic and murderous cults here in the land of humans. It's pretty Lovecraftian, and combined with the leather coats, floppy hats and blunderbusses of the gothic era, Grim Dawn actually bears quite a bit in common with Bloodborne. It's just as invigorating for the ARPG genre as that game was for the Souls series. The actual quality of the writing isn't consistent, sadly, and the voice acting is often laughable. But the atmosphere? It's absolutely stellar.

While Diablo II is held as the gold standard for hack-and-slash RPGs, I still have fond memories of the singular sense of dread that permeated the original game. The whole thing was set in a single village, and we got to see how a small, core group of individuals was corrupted, in increasingly disturbing ways, by the evil creeping up from below. Grim Dawn uses its setting to return the genre from more lighthearted fare like Torchlight to this ominous tone, where wicked forces are compelling people to, say, burn loves ones and perform twisted experiments on each other. 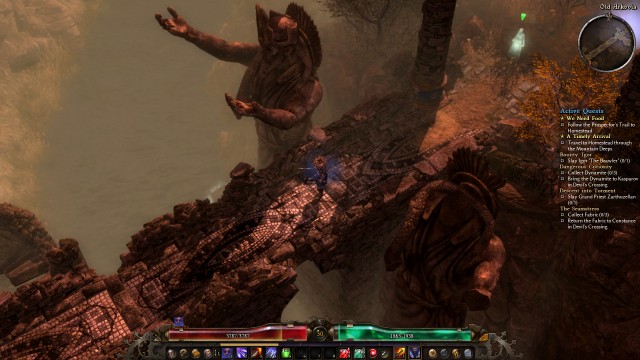 When you see this sort of thing happening, there's little ambiguity over the fact that the abominations walking the Earth as a result of this madness deserve to die. And despite everything else I've said, the ultimate pull of any good ARPG is the therapeutic thrill of cutting through thousands of ugly monsters and then picking through their corpses for new pants. There's an almost comical amount of loot in Grim Dawn, and adorning your character with it is even more enjoyable than usual since it eschews the typical fantasy role-playing aesthetic. Grim Dawn is full of floppy hats. There's barely any sunlight in this world to begin with, so it barely even makes sense, but damned if I don't feel a little more badass wearing one anyway.

The game's multiplayer functionality seemed a bit spotty from what I tried of it, though I admittedly only dipped in for testing purposes, since I'm primarily a solo guy. As well, Grim Dawn's lack of randomly-generated dungeons may harm its replay factor, which I know can be a big deal to ARPG fans who like to run several characters simultaneously. Thankfully, I'm more interested in the one-time experience, and to that end, Grim Dawn is polished, visually distinctive and even downright beautiful in spots. It's surprising to me how well the game conveys a sense of scope in its environments when it's essentially working with a 2D, top-down frame.

Most importantly, Grim Dawn is hearty and really, really solid, delivering a good 25-30 hours of exactly what I was looking for with a lot more atmosphere than I ever would have anticipated. I understand that Diablo III is still the most popular choice among ARPG enthusiasts at the moment, and that its steady stream of adjustments and expansions over the past few years has given it a lot of breadth; Blizzard is good at that. I only played that game at launch, when it was a technical mess, so I can't make direct comparisons. What I can tell you, though, is that you don't need to wait for Grim Dawn to live up to your expectations. It's out there and it's awesome right now.

If you enjoyed this Grim Dawn review, you're encouraged to discuss it with the author and with other members of the site's community. If you don't already have an HonestGamers account, you can sign up for one in a snap. Thank you for reading!

© 1998-2021 HonestGamers
None of the material contained within this site may be reproduced in any conceivable fashion without permission from the author(s) of said material. This site is not sponsored or endorsed by Nintendo, Sega, Sony, Microsoft, or any other such party. Grim Dawn is a registered trademark of its copyright holder. This site makes no claim to Grim Dawn, its characters, screenshots, artwork, music, or any intellectual property contained within. Opinions expressed on this site do not necessarily represent the opinion of site staff or sponsors. Staff and freelance reviews are typically written based on time spent with a retail review copy or review key for the game that is provided by its publisher.