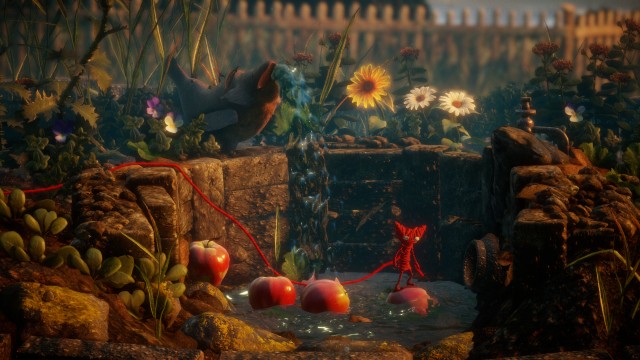 If you'd asked me what I thought of Unravel only an hour or two in, I'd have excitedly jumped out of my seat and attempted to declare the game a lock for my year-end best-of list before slipping in the puddle of saliva that had been pooling underneath me. Having since finished the game and sat on it for a few weeks, that song has noticeably mellowed. Developer Coldwood Interactive put all of its chips on Unravel's charm factor, and you know as well as I do that charm always wears thin after a while; we can only be sad to see our little yarn-man protagonist shivering in the rain for so long before we start to wonder why he's so cold when he's made entirely of yarn and therefore has no nerves.

Look, make no mistake: Unravel is adorable. It's about a tiny man made of yarn (canonically dubbed "Yarny," to my great displeasure, though I caught no instances of him being called that in-game) going on grand backyard adventures, swinging and rappelling over tree stumps and tires and various other objects that you and I would tower over. Yarny is transparently animated for maximum cheek-pinchingness. The awkward boomerang-shaped head, the expressive eyes, the stubby limbs  unless you're some sort of monster, you can't help but root for this poor little guy.

And while Unravel does have the blessing of EA, it was nevertheless handled by a relatively small team, and as such, the degree of visual sheen that it displays is unreal. When I say that Unravel is breathtakingly gorgeous, I'm not putting that on relative terms. It's not pretty for an indie game. It doesn't do more with less. Unravel is stunning to look at by any standard. If you took a Yarny figure of your own, went to a local park, posed him about and took pictures, they'd look borderline indistinguishable from Unravel screenshots. And yes, it looks even better in motion, somehow.

It's got a lovely soundtrack, too  violin-focused and dynamic in that the music constantly shifts tempos to match the game's pace. They're crisply-produced melodies, which aids the quaintness factor. You could almost imagine this whole scene unfolding right now, out on your porch, Yarny dangling from a chair while a quartet dressed in frilly clothing scores the whole thing. 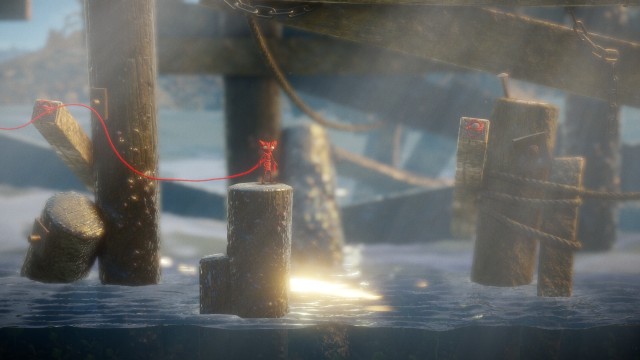 So Unravel wins the first impressions game, but it's weaker in the long term. For as much attention as has been put into Unravel's presentation, considerably less was spent providing original mechanics to latch onto. The drive is that the protagonist can use his yarn for various purposes in navigating the environments. Usually, this amounts to either swinging or pulling things, though Yarny can also tether objects to one another from predetermined points. Unravel gets a bit more mileage out of that idea, but it's typically just a matter of setting up a bridge that can either be used as a trampoline or to shuffle pushable physics items about. Unravel loves its pushable physics items.

Coldwood becomes a bit too starved for ideas too quickly  after the first handful of levels, you've seen how most of the game's puzzles are meant to be solved. Unravel's one unique twist is derived from its title, in that Yarny physically unspools as he moves and can only dispense a limited amount of yarn before being forced to a halt. The challenge in some of the later levels involves not just figuring out how to clear a segment, but taking the most concise route. It's not a bad idea, but there's no straightforward "return to checkpoint" function and backtracking is a slow process. (Using your trail of yarn as a rescue line is basically a more sluggish version of the rewind function from Prince of Persia.)

Unfortunately, once Unravel exhausts its puzzles, it only gets less inspired, namely by adopting a higher focus on reflex-based platform with an unbefitting dark tone. This is the point when the game aspires to be Limbo, aping the twisted machinery, the comical instant deaths and the inescapable sense that everything's a predator. It's clumsy and it doesn't even make sense. Why is Yarny getting electrocuted so easily when he's made of wool, which isn't a conductor? And why are animals now attacking him? Unravel's nadir is a sequence that has players arbitrarily dodging fly-by attacks from a flock of birds that seem to be operating on some sort of Disneyland animatronic rail system.

So while Unravel is undebatably high on memorable visuals  get a load of those snow effects in the final level  it's a trade-off for the unique mechanics and risks that could have elevated this experience beyond platformer fluff. The game never worse than serviceable and frequently much better than that, if only for its sensational audiovisual appeal. Contrary to my initial forecasts, however, this one won't be landing on my Game of the Year list. It's more the sort of title I'll briefly tweet about when it gets a Steam sale, but since it's an Origin exclusive, well, use your own best judgment, I guess.
3/5

If you enjoyed this Unravel review, you're encouraged to discuss it with the author and with other members of the site's community. If you don't already have an HonestGamers account, you can sign up for one in a snap. Thank you for reading!

© 1998-2021 HonestGamers
None of the material contained within this site may be reproduced in any conceivable fashion without permission from the author(s) of said material. This site is not sponsored or endorsed by Nintendo, Sega, Sony, Microsoft, or any other such party. Unravel is a registered trademark of its copyright holder. This site makes no claim to Unravel, its characters, screenshots, artwork, music, or any intellectual property contained within. Opinions expressed on this site do not necessarily represent the opinion of site staff or sponsors. Staff and freelance reviews are typically written based on time spent with a retail review copy or review key for the game that is provided by its publisher.