Hitman GO can be a tough sell, especially if one starts judging based on quick glances; a third-person stealth series, about 15 years running, reduced to an overhead, minimalist puzzle product. Wanna get people riled up more? Mention that it was originally intended and released for mobile devices. I can imagine several gamers drowning in a pool of stigma as I write this.

But let's just pretend for a moment this isn't a supposed mindless game riding on the coattails of an established IP, and take a much closer look. GO is a turned-based puzzle title where you control a bald assassin, Agent 47, and the goal is to reach each exit or target while facing opposition; take one step through the marked pathways, and then every movable guard in the level makes a simultaneous reaction afterwards. Repeat for the entire game. Harder than it sounds, because first and foremost, each level comes to an abrupt end if you're caught in any guard's field of vision once, which is one spot in front of them. There's also limited space, so if you arrogantly rush forward, you could find yourself trapped in a corner, with all sides blocked by incoming security. 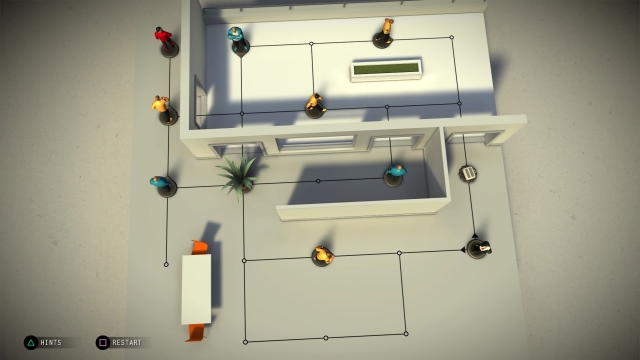 Your offensive methods are deliberately nonexistent when the game begins, only allowing your assassin a surprise attack from anywhere that's not the front, and that's if you can position yourself correctly. Humorously, the charming tabletop aesthetics come into play when you do succeed with a kill, as your faceless miniature bumps into another, nonviolently discarding the figure to the side of the board. But as progress is made, new ways to evade vigilant patrols are introduced, though this also brings new ways to fail. Rocks, empty containers, and other ground objects can be tossed in selected spots to alter a guard's route. Disguises will fool, but only on people with the same outfit, and sewer "chutes" warp to various locations on the board. Make it far enough, and guns are brought into the fray, which even stays in line with the game's spirit of puzzle-solving.

To add further, the game never felt it got better or worse for these additions whenever I played. The devs always ensured the quality of the puzzles never truly wavered whenever new gadgets or gimmicks enter the picture, and this is most visible when trying to complete each level's sub-goals. They're not mindbogglingly hard, but they're challenging enough to force you into a completely different way of thinking, giving you a true sense of satisfaction when a puzzle's solved.

For example, one level has 21 movable spots, and the board is basically in the shape of a square on a roof. Seven spots are protected by unmovable enemies that are eyeing the only possible routes you can take. So you have to rely on sound objects to pull them away, which is difficult, because the only sensible places you can move them is towards your already-cramped starting location. There's an obvious solution, but it requires boldness. After some patient trial and error, you reach the exit and finish the level. Great, right? Now do that very same level with the intent of killing everyone. You've demonstrated the ability to slip past half the guards towards safety, but you now need to position security in such a way that is both susceptible to your kills and invulnerable to counters from other guards.

Oh, you succeeded? Okay, now complete the level within 12 moves. 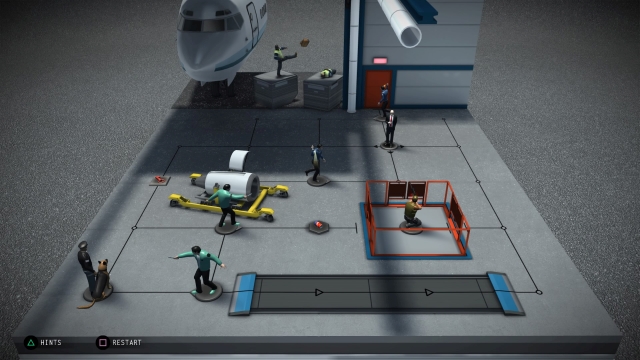 It's incredible that the devs successfully added so many layers to boards with deceptively easy-looking designs, and did it with over 80 levels. Thankfully, too, you don't have to complete the varied goals in one try, and also have an infinite number of moves and retries to get them right. Seriously, this review would have taken a completely different tone had the game allowed for such harsh restrictions.

This shouldn't be a tough sell, especially since it carries qualities that make for a classic Hitman outing; you have the challenge of remaining hidden, using the environments to your advantage, walking among foes while wearing disguises, sniping from a distance, and of course, obtaining the elusive Silent Assassin rank. I would have loved if this had a creator mode, where you could upload your levels for others to try, but that's just me fantasizing about adding to an already solid title. Accessible to both fans and strangers to the IP, Hitman GO comes recommended to anyone looking for a genuinely entertaining puzzle release.

If you enjoyed this Hitman GO: Definitive Edition review, you're encouraged to discuss it with the author and with other members of the site's community. If you don't already have an HonestGamers account, you can sign up for one in a snap. Thank you for reading!

© 1998-2021 HonestGamers
None of the material contained within this site may be reproduced in any conceivable fashion without permission from the author(s) of said material. This site is not sponsored or endorsed by Nintendo, Sega, Sony, Microsoft, or any other such party. Hitman GO: Definitive Edition is a registered trademark of its copyright holder. This site makes no claim to Hitman GO: Definitive Edition, its characters, screenshots, artwork, music, or any intellectual property contained within. Opinions expressed on this site do not necessarily represent the opinion of site staff or sponsors. Staff and freelance reviews are typically written based on time spent with a retail review copy or review key for the game that is provided by its publisher.