I was quite excited when I first saw I, Zombie for sale. A casual game centered around controlling your own shuffling army of zombies to cause havoc? Whats not to love?

You start off with your own singular little zombie and you are given your first tutorial mission. This mission ensures you know how to use the directional keys and understand the basic concept that if you are a zombie and try to close to an unarmed human, they will run from you. And if for some reason you manage to stand just long enough next to them, well you just made a new zombie friend.

After the tutorial and the first couple of levels, you realise what I,Zombie will be all about - a combination of a stealth and puzzling, with a brief element of RTS. All in all, it is a relatively short game, with only 20 levels. However, level design is solid. It has a nice learning curve and level difficulty increases gradually. The soundtrack, in its never ending loop combines well with I,Zombie , and the visuals are quite nice for this little game. I particularly like the main zombie design, as it sort of reminds me a Tim Burton meets Simpsons combination. I suppose Danny Elfman had already set that link before, so perhaps that concept isn't so far fetched. 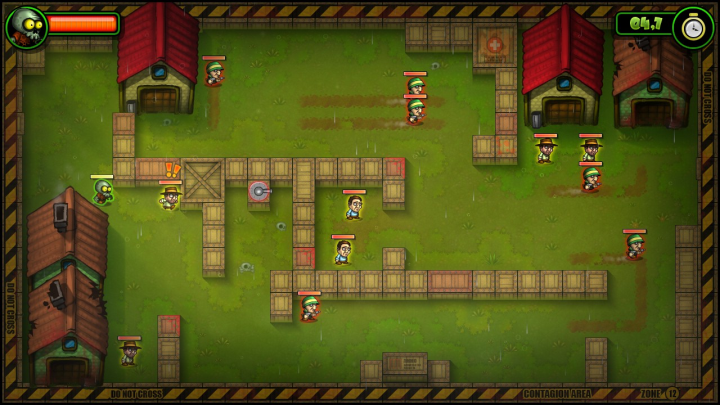 In short, these are the things I can point out as positive in I,Zombie - The concept, level design, the soundtrack and the main little zombie. Seems like we are heading for a masterpiece!

The first thing I noticed after initial seconds of gameplay was that the controls weren't very responsive. There seems to be a lag between hitting a button and the character acting on it, and it becomes incredibly frustrating playing throughout levels of stealth without really knowing where your character's movement will end. I came to realise that as you lower the resolution, I,Zombie will run faster and the commands will become more responsive... but at this point I have started questioning if a Unity-based game should struggle to this degree. However, lowering the resolution will reduce the game window, and if you fall lower than 800 x 600, I would recommend that you play it through with the aid of a magnifying glass.

Apart from unresponsive controls, I have often struggled with basic movement. More often than not, my little zombie would get stuck on the edge of a box or some other obstacle, without being very clear why. The combination of broken controls and movement issues turned almost every level into a trial and error experience. And whereas in the first couple of levels I was still going for the 3 stars rating, the frustration soon took over and my main goal became powering through the 20 levels I,Zombie had to offer. 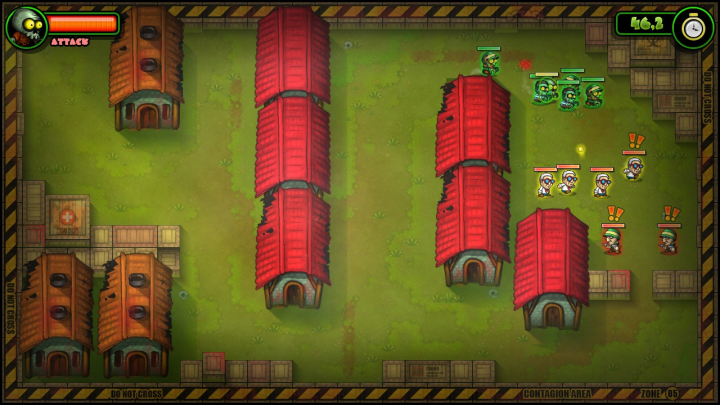 Eventually I had another go in reaching max stars and beating I,Zombie in less than 15 minutes, in order to complete the achievements. Unfortunately this ended up as another disappointment, as for some reason they still appear as "incomplete"

Apart from the nice basic visuals, I,Zombie also had a couple of graphic glitches as the constant flickering of white lines all over the place or the glitchy rain effects (which seem completely unnecessary and don't bring any added value to the game). To sum up, it is a nice game, with a nice concept and ideas and solid map building. However, the several flaws it has turn what should be an enjoyable game into a frustrating experience. At some point you have to wonder if the fact it is so short is actually a positive in disguise.

However, I do think that the price is fair and is often on steam sales. If you are curious, by all means get it. But don't expect a masterpiece.

If you enjoyed this I, Zombie review, you're encouraged to discuss it with the author and with other members of the site's community. If you don't already have an HonestGamers account, you can sign up for one in a snap. Thank you for reading!

© 1998-2021 HonestGamers
None of the material contained within this site may be reproduced in any conceivable fashion without permission from the author(s) of said material. This site is not sponsored or endorsed by Nintendo, Sega, Sony, Microsoft, or any other such party. I, Zombie is a registered trademark of its copyright holder. This site makes no claim to I, Zombie, its characters, screenshots, artwork, music, or any intellectual property contained within. Opinions expressed on this site do not necessarily represent the opinion of site staff or sponsors. Staff and freelance reviews are typically written based on time spent with a retail review copy or review key for the game that is provided by its publisher.