Let's say you're in the mood for Mega Man, and want to play something recent. Unfortunately, as of this writing, the last legitimate new game dates back to 2010 with Mega Man 10. What followed was a blitzkrieg of sorrow: lame mobile titles, cameos in other IPs, and ambitious games that were cancelled the moment Inafune went to the restroom. While Capcom of Japan is treating the franchise as if it's some kind of venereal disease, the American branch at least tries to give it some love. By "try", I mean promote a fanmade game, Street Fighter X Mega Man, which was done for free, and now by approving a compilation for the 8th generation console cycle.

Mega Man Legacy Collection encapsulates the franchise's origins; what started as a single action game with unorthodox ideas, blossomed into a long-lasting, endearing series known for its challenges, quirks, and unique characters. To say that the first Mega Man stood out back then would be an understatement, as it defied the typical approach to side-scrolling action games. Instead of playing levels in the same order every time, MM allowed the freedom to do them in any order, creating a different flow with each new session. Not stopping there, the devs also awarded your protagonist, a little blue robot, the special powers of defeated bosses, allowing for additional, limited firepower against enemies. If you choose carefully, too, you can deal massive damage to bosses with specific powers. 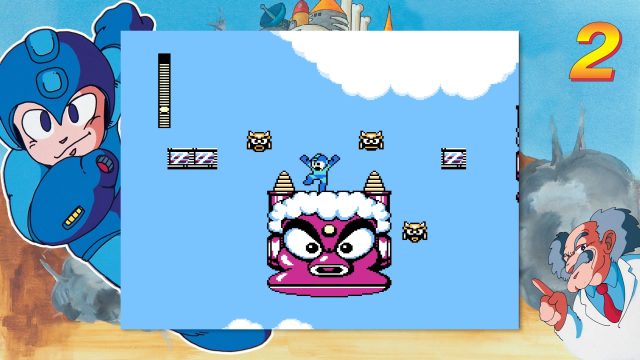 Besides those distinct qualities, the series is also renowned for its often punishing difficulty curve, due to grueling obstacles and demanding enemy placement. In one game, you'll deal with a vertical stage where small, shielded, hurtful devices dominate the mini platforms throughout, and in another, outrun an onslaught of thick, one-hit kill lasers in one of the IP's most infamous stages. Grow nerves of steel riding platforms in a spike-infested tunnel, carefully jumping onto other moving platforms before they have a chance to shoot projectiles. Have your ego crushed battling seemingly easy crickets and flying beetles that can whittle your life bar with simple, effective counters. Oh, and beware those blasted vanishing blocks... Mega Man level designs are ideally more about confronting tough, thought-out hurdles head-on than it is about being burdened with minor inconveniences.

While the first Mega Man deservedly gets credit for laying down a rough foundation, there's reason why Mega Man 2 is looked upon more fondly by many; it ironed out the kinks, balanced the design, and added much more innovation, creating a genuinely fun experience that subsequent games strove to mimic, with varying degrees of success. MM3 tried being ambitious, but wound up being decent with mostly uninspired levels and a slide move that was underused. MM4 feels like MM2's true successor, with focus on tighter level design, fierce challenges, and legitimate uses for the slide and charge-up moves. MM5, on the other hand, is devoid of imaginative layouts and redundantly recycles enemies from other stages, though its boss fights are surprisingly tough. And being the last hurrah for the NES, MM6 is the easiest and most ironic, since, well, it burdens you with minor inconveniences.

If you're waiting for me to list more Mega Man games, don't hold your breath. That obvious fantasy of having all the original series' titles in one convenient package isn't happening here. This compilation was done by Digital Eclipse, too, who are no strangers to archival projects, as evident by Capcom Classics Collection and Sonic's Ultimate Genesis Collection, to name a few. What's the deal? Well, in DE's eyes, this is more of a restoration project, digitally preserving the games as they originally were, bugs and slowdowns included, for generations to come. So, to stay true to this mission statement, they intentionally chose to do the first six releases to maximize their restoration efforts. Shoot, in an interview, they even mentioned porting Mega Man Anniversary Collection would be pointless, as it's the equivalent to using a VHS transfer for a Blu-ray release. 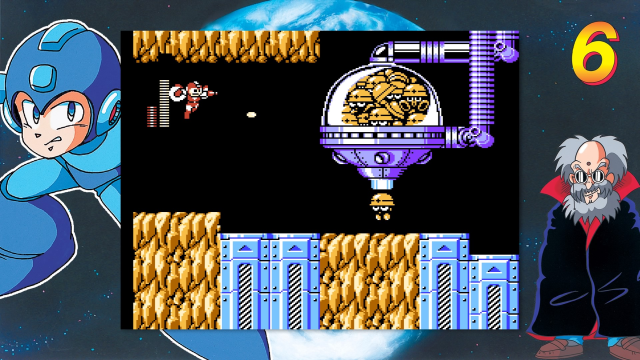 Although... that same interview is also home to some of the greatest non-answers and oddest hindsight (you seriously couldn't find the Mega Man Wiki??) I've seen committed to text. Makes me wonder if this was the best Digital Eclipse could've done for the compilation. I mean, why not include Mega Man 9 and 10? I'm no programming genius, so I probably sound like a complete idiot here, but since those games are recent and digital, can't they just add them as is without much trouble? Or does it conflict with their special emulation engine? Pride? I dunno; this is purely a rambling paragraph.

In terms of bonus content, you get a "music player" that includes every tune from all six games. It's a questionable addition, since they don't loop infinitely. Odd, since that's what they do in the actual games, and worse, most themes cut off abruptly when they reach the end. The Database, translated from the Rockman Complete Works series, is actually pretty neat, due to the profiling of all the enemies, their names, and detailed descriptions of what they were and are. Also listed are the fastest ways to defeat each opponent with the right boss power, for those who don't like playing video games using the scientific method, aka playing video games.

However, the standout extra clearly goes to the Challenges mode, featuring a vvveerrrrryy long list of obstacles to tackle. Most challenges essentially boil down to the player fighting through brief segments pulled out of sequence from either one or multiple titles, pieced together by warps. There are others, such as taking on a barrage of Wily machines, a storm of giant animal robots, and, have mercy, a test where you go through numerous vanishing block segments. To put it bluntly, Challenges is an extensive time trial mode with online leaderboards and watchable replays for the top spots. 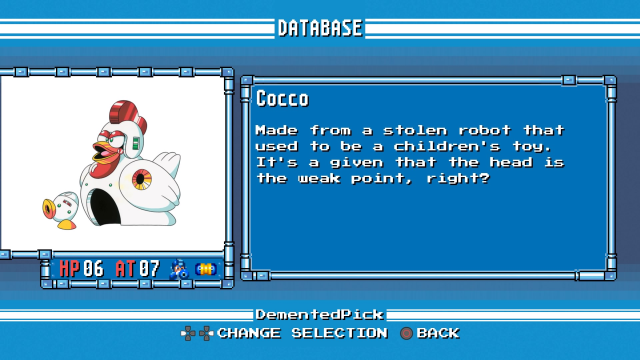 I'm sure speedrun aficionados are in love with this inclusion, but I personally find it a mixed bag. While well-intentioned by Digital Eclipse as a means to test players' dexterity with the environments and special abilities, I don't think they took into account how easy it is to exploit these games. I've watched several replays where players quickly phased through walls in certain spots, and extended a projectile shots' stay on screen by rapidly opening the menu. By no means am I condemning these players, it's just that the devs should have thought about this mode a little harder. For example, several challenges easily could've been exploit-free had they removed boss abilities and power-ups from the menus.

Is Mega Man Legacy Collection ideal? Of course not. As a restoration venture, it's commendable, but almost everything else either comes off weird, like the music player, or not fleshed out, such as the Challenges. If you do intend to pick this up, I strongly advise purchasing the $15 digital version over the $30 physical release; you're literally paying $15 extra dollars, plus tax, for a case, a Blu-ray disc, small stickers, and a cheat sheet. I just hope some good comes of this release if it sells well enough, and that we'll either receive more Mega Man collections, or a new ga-ahahahahahaha.

If you enjoyed this Mega Man Legacy Collection review, you're encouraged to discuss it with the author and with other members of the site's community. If you don't already have an HonestGamers account, you can sign up for one in a snap. Thank you for reading!

© 1998-2021 HonestGamers
None of the material contained within this site may be reproduced in any conceivable fashion without permission from the author(s) of said material. This site is not sponsored or endorsed by Nintendo, Sega, Sony, Microsoft, or any other such party. Mega Man Legacy Collection is a registered trademark of its copyright holder. This site makes no claim to Mega Man Legacy Collection, its characters, screenshots, artwork, music, or any intellectual property contained within. Opinions expressed on this site do not necessarily represent the opinion of site staff or sponsors. Staff and freelance reviews are typically written based on time spent with a retail review copy or review key for the game that is provided by its publisher.