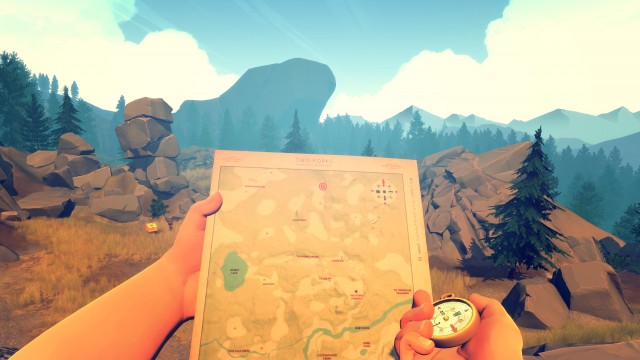 Note: I don't intend to spoil anything specific in this review, but Firewatch is a pretty singularly-focused suspense story, and as such, I can't critique it without at least dropping some hints concerning the direction its plot takes. If you want to go in cold, don't read any further. And if you'd still like to know whether or not I recommend the game, in the spirit of Firewatch, the answer may disappoint you.

A successful mystery needs to do two things. Firstly, it needs to surprise you. That's a given. By very definition of the word, it's not a very effective mystery if I've figured out what's going to happen. Secondly, the answers need to be more satisfying than the ones I've been tossing around in my head. Catching me off guard only goes so far if only a few minutes later I'm muttering, "Gee, I really wish they'd gone with the thing I was thinking of."

Gone Home got both of those things right. It wasn't about what you thought it was about. You thought you were playing a haunted house game, not because Gone Home ever told you that, but because we're trained as gamers to believe that dark mansions with missing residents tend to be full of mutilated corpses. And the game's relatable, uplifting message rang so much truer than any ghost story could.

I bring this up because Firewatch really, really wants to be Gone Home; the time between releases even has me wondering if development for the former didn't start shortly after someone on the team played the latter. It's a walking-simulator-slash-mystery that tells a personal and (in the grand scope of things) rather trivial tale, but masquerades as a broader genre exercise. The key difference between these games is that Firewatch cheats. Developer Campo Santo put all of its chips on Firewatch's emotional payoff outweighing the realization that 90% of the game is a blatant red herring, and when it fails, it essentially renders its entire story moot. 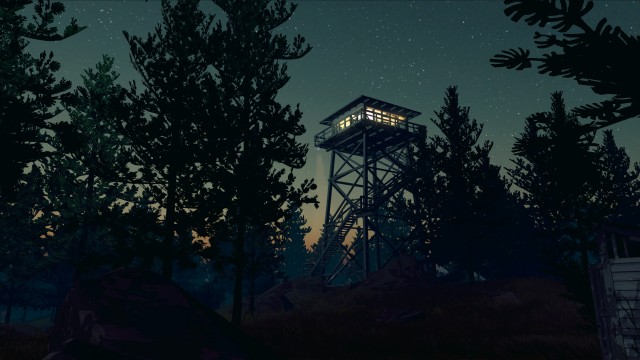 That story centers on a man named Henry, whose wife has developed Alzheimer's at a relatively young age, as we learn in a text adventure intro that's somewhat incongruous with the rest of the game. Beset by his relationship woes, Henry retreats to the Wyoming wilderness, where he takes a job at a national park, performing routine upkeep and watching for forest fires. His only company is his boss, Delilah, who's stationed in one of the other towers and communicates via radio.

Inevitably, weird things begin to happen  specifically, the sorts of weird things that would lead me to joke about expecting to see a Dharma Initiative logo on something. Henry finds a massive chain link fence that Delilah didn't know about and can't explain. A campsite exhibits evidence of an attack, presumably by a bear but potentially by something more supernatural. And it becomes increasingly clear that someone else is in the woods, keeping tabs on our protagonist and outracing him on a technological level.

An isolated environment, a main character running from his past, hints of a conspiracy, questions over the corporeality of what's occurring around us  these are the ingredients for instant intrigue, and Campo Santo presents numerous potential culprits and explanations. I've hinted that the setup reminds me of Lost, but I've also said that Firewatch isn't about what you think it's about. So, if you're savvy, you've probably picked up on the fact that the Lost stuff turns out to be bogus. Hey, I did warn you that I was gonna spoil some generalities here.

Now, that's fine. I don't necessarily fault Firewatch for not being about polars bears and smoke monsters and convoluted psychological experiments and magneticism and everything else Lost was about. Firewatch is a story ostensibly based in reality and that's cool. But if you're wondering how Campo Santo can feasibly explain why a vast section of the forest is fenced off and full of advanced surveillance equipment without resorting to Area 51 shenanigans, well, keep wondering.

That's not to say that we don't get an answer; the answer just makes no sense. It doesn't hold up to scrutiny. And to continue playing the "and I would be fine with that if" game, I would be fine with that if the conclusion that Campo Santo provided was either exciting or emotionally resonant. If I want an ending to work, I'll jump through the necessary hoops to get there. The reason Firewatch doesn't stick the landing is because it misjudges the strengths of its own writing. 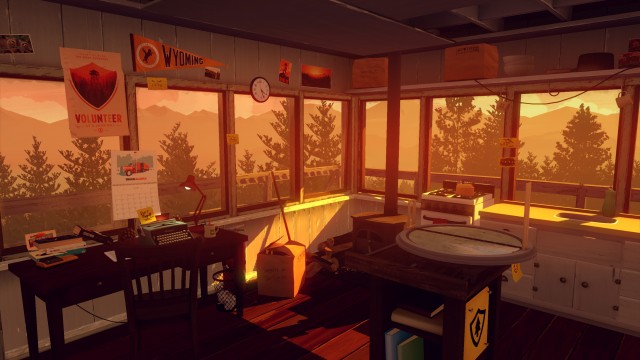 By a country mile, the strongest aspect of Firewatch is the relationship between Henry and Delilah. Their chatter is funny and organic. They good-naturedly tease each other; they prod for information; they dispense said information where it would make sense to do so. They joke, they quip, they expose vulnerabilities. They understand each other and provide a near-constant comfort in an environment with very few friendly faces. Voice actors Rich Sommer and Cissy Jones display natural chemistry, and the script gives them ample opportunity not just for us to like them, but for them to like each other.

Unfortunately, their relationship, as well as it works, is the one aspect of Firewatch without any serious payoff. It's really the only component of this story that we're shown rather than told, yet the game's conclusion is more concerned with wrapping up their own individual backstories, neither of which we're given any real reason to care about. The all-text intro asks us to empathize with Henry's marital issues with actually seeing them for ourselves, and the same can be said about Delilah's personal demons, which we're given a hasty seminar on when the writers deem it important for us to know about them. As lovely as the conversations between these two characters often are, they're filler, inserted to make the walking segments of this walking simulator feel less arbitrary.

Speaking of which, I know we're approaching the point when "walking simulator" is becoming less a derogatory term and more the official label, but there's no escaping the fact that walking is just not a particularly exciting activity. Some of the better walking simulators in recent memory have kept things brisk, but Firewatch drags the process out to nearly four hours, and I never saw any real justification for me being in control to begin with. Is there any reason for Firewatch not to be a two-hour indie film when so much of it is just objective-chasing, free of consequence? It's a pretty forest, but I'd rather have less to look at and more to actually do.

That speaks to a confusion inherent to Firewatch. This may sound harsh, but I can't figure out why it exists, other than to cheaply fool audiences. Gone Home may have been a bait-and-switch, but at least it had important things to say about LGBT tolerance and societal outcast status. The only real message I can unearth from Firewatch is not to let the demons of your past eat away at you, but I don't see how they could when they matter this little.

If you enjoyed this Firewatch review, you're encouraged to discuss it with the author and with other members of the site's community. If you don't already have an HonestGamers account, you can sign up for one in a snap. Thank you for reading!

© 1998-2021 HonestGamers
None of the material contained within this site may be reproduced in any conceivable fashion without permission from the author(s) of said material. This site is not sponsored or endorsed by Nintendo, Sega, Sony, Microsoft, or any other such party. Firewatch is a registered trademark of its copyright holder. This site makes no claim to Firewatch, its characters, screenshots, artwork, music, or any intellectual property contained within. Opinions expressed on this site do not necessarily represent the opinion of site staff or sponsors. Staff and freelance reviews are typically written based on time spent with a retail review copy or review key for the game that is provided by its publisher.