Let me tell you about Sir McGladdery: he was of the Hokage class, would deal huge damage, and was very agile. However, those abilities alone could only take him so far within the inexplicable layouts of a castle besieged. Skill and knowledge were also needed, and McGladdery had plenty as he plowed through many a fowl beast and trap that adorned the premises. He entered a long, horizontal room filled with floor traps and enemies; he dashed past a tricky, small room with turrets placed top to bottom... only to repeat the same setup in the following room; he briefly roamed the castle's dimly-lit dungeon and immediately left, thankful that there wasn't a powerful knight waiting in the darkness; then he ventured the adjoining forest for loot, but unfortunately had trouble reading a pillaged book, due to dyslexia.

Eventually, Sir McGladdery met his doom when penetrating the castle's tower, where fierce opposition withered his HP bar. On his way to the tower's boss, he stumbled into a very cramped room, its inhabitants being two large knights, both swinging two chained, spiked balls of various lengths. All while independent spiked balls bounced off corners... He perished without ever laying eyes on a boss, but he was the first to travel the longest and defeated the most enemies of any relative that came before. His loot and knowledge came in handy for future generations that braved the castle's corridors. 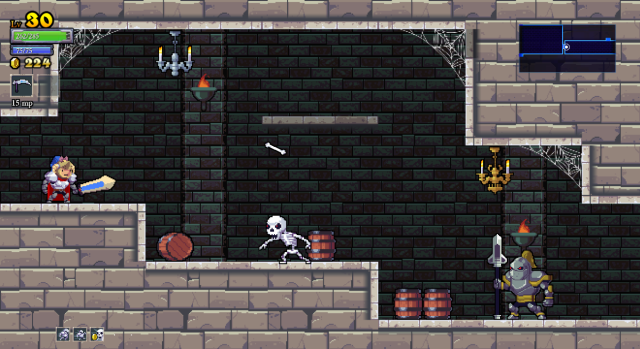 There's always a refreshingly different outcome when starting a new playthrough of Rogue Legacy, and it's thanks to a fusion of several mechanics blending so well with one another. At its heart is a 2D exploration title in the vein of Symphony of the Night, albeit you can't save and have one life to live. This is where the rogue-lite elements come into play. As mentioned above, you retain loot, either from downed opponents, broken decor, or chests, for the subsequent playthrough. From there, you can purchase various upgrades before revisiting the randomly-generated castle, such as more HP and strength, or a better shot at critical hits and even a slim chance at reviving. You can even purchase equipment and special abilities, such as dashing and double jumping, that your deceased protagonist found in chests. Yes, that sentence is exactly how it sounds.

Then there's the generational quirk, likely the main reason most people gravitated towards the game in the first place. When you begin a new playthrough, you have to pick between three new, random characters from the ever-growing family tree to continue the fight. Each person has wildly different, often humorous stats and phobias from one another, stymieing any rock solid style or flow you planned on using. In one playthrough, I picked Sir Lancelot because he was the best of the three, an Assassin class with powerful critical hits and no foot pulse, allowing me to walk on trap floors without setting them off. On the downside, he had low stats and was a clumsy fellow, destroying objects the second he made contact with them. I didn't think the latter was so bad, until I entered a room with a barrel tower leading to a chest....

Scenarios like that fit right in with the game's brand of morbid humor; you can have a perfectly normal session one moment, and then, in the next, you find a circus tent and clown within the castle, battle a ginormous MS Paint portrait, and chose a warrior that has a phobia of chickens, allowing said health item to come to life and attack when encountered. The characters' traits and/or phobias alone often take the game to ridiculous levels, as you can do a playthrough with chrome-colored graphics, due to a "nostalgia" trait, or play upside-down because of a vertigo trait. Or a trait where you pass gas, because fart jokes are the best jokes. 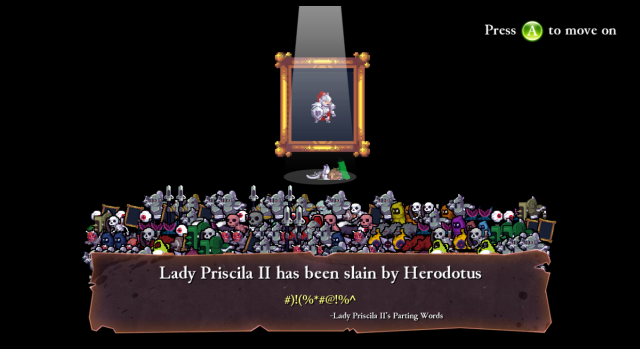 But any dev team could've made a SotN-inspired game with rogue-like components, tacked on a similar genealogy gimmick, thrown in a couple jokes, and called it a day. What makes Rogue Legacy special?

The moment you first step into the castle after the tutorial, you can tell Cellar Door Games were committed to making a genuinely fun, challenging title. The level design is the real star of the game, because it's pretty shocking how clever a huge chunk of the castle's rooms are, in both the layout, and the placement of enemies and traps. For example, I once entered a small, cramped, vertical u-shaped room where at the end was an eyeball opponent that shot multiple fireballs through walls. Just dash towards the thing, right? Except, there was also a hulking, green guard with a shield blocking the path. And I couldn't even jump over to attack its exposed back, because the corridor ceiling was extremely low. I had to carefully and patiently chip away at the guard's health, all while avoiding a stream of fireballs.

Rogue Legacy's design is heavily in favor of dexterity, usually forcing the player's hand the very second they enter a new room. Need time to plan? Too bad, an anthropomorphic white flame and two mages are ascending towards your position. Want that treasure chest? Well, you either have to make it to the top of a guarded challenge room without getting hit, or cross a floor-trapped, spiked-ceiling, turret-covered, enemy-laden hallway to open it. You literally have to earn your progress. The craziest thing is, even after playing for more than 13 hours, uncovering the castle layout numerous times, I'm still discovering new rooms. In an alternative universe, Cellar Door Games easily could've made a scant selection of rooms and let the random generator do the rest of the "work". But they went beyond, and as a result, the game is all the more impressive due to their accomplishments.

The core gameplay is so exceptional that, I believe, if the dev team never had the other mechanics, the rogue-lite portions, the random generator, and the generation angle, they still would have a remarkable action-adventure game on their hands. But I'm glad they exist to add an entertaining depth to this release. Not once, too, do they feel unnecessary or shoehorned in, as many games are prone to do when specific mechanics become the current "It" thing. Cellar Door Games succeeded at making Rogue Legacy feel seamless, immediately accessible to anyone, and high on replay value, all without sacrificing challenge and joy. 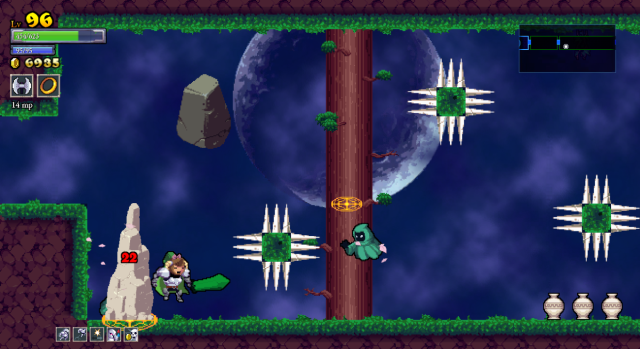 I thought Sir McGladdery's run was as good as it would get for me, but several dead relatives later, Lady Charlotte II came into my life with a similar, long-lasting spree. She went on a massacre throughout the castle, forest, and tower, recovered tons of lost health multiple times, gathered a huge sum of loot, and almost defeated the dungeon boss after all that. She strove even in death, as her loot and knowledge was the steppingstone for future generations, who then went on to defeat the dungeon boss, unlocked the final door, and so on... She had one hell of a journey, and thanks to Cellar Door Games' efforts, it was just as fun as it was ages ago with Sir McGladdery, and will continue to be as I persist in ravaging the castle.

If you enjoyed this Rogue Legacy review, you're encouraged to discuss it with the author and with other members of the site's community. If you don't already have an HonestGamers account, you can sign up for one in a snap. Thank you for reading!

© 1998-2021 HonestGamers
None of the material contained within this site may be reproduced in any conceivable fashion without permission from the author(s) of said material. This site is not sponsored or endorsed by Nintendo, Sega, Sony, Microsoft, or any other such party. Rogue Legacy is a registered trademark of its copyright holder. This site makes no claim to Rogue Legacy, its characters, screenshots, artwork, music, or any intellectual property contained within. Opinions expressed on this site do not necessarily represent the opinion of site staff or sponsors. Staff and freelance reviews are typically written based on time spent with a retail review copy or review key for the game that is provided by its publisher.