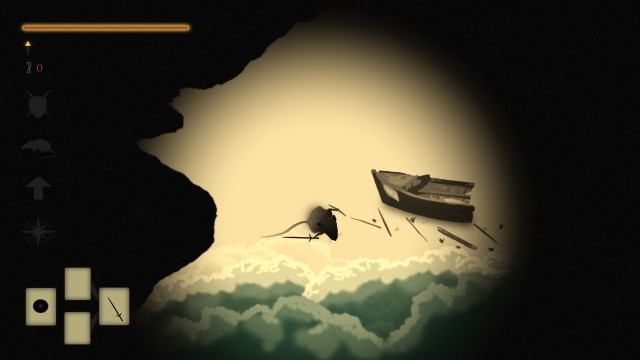 One of the reasons that fans of From Software's Souls series tend to replay those games so incessantly is that once you've fallen into rhythm with them, nothing else really feels adequate. Mastering their heavy combat and unraveling their sprawling worlds creates a thirst that few other games really quench, since Souls has essentially carved out a rather specific genre in its own right. When I get a craving for something like Dark Souls, I'll foolishly stumble into something dumb like Bound by Flame hoping it'll fill that gap, only to return to Dark Souls for the umpteenth time with some silly new challenge imposed on myself.

Daniel Wright felt a similar yearning, but he actually decided to do something about it, educating himself in various facets of game design and turning out DarkMaus, essentially a one-man passion project  the music is apparently the only thing he didn't handle himself  that pays excellent tribute to the series that inspired it, in 2D, top-down form. Unlike Lords of the Fallen, the AAA industry's cynical attempt to reel in Souls fans by aping its surface-level values and nothing else, DarkMaus was born from a thorough understanding of what makes the franchise work. If the "soulslike" is to become a legitimate subgenre over the next few years, I'm comfortable calling this the first great one.

So what are the characteristics of a soulslike? Well, weighty hand-to-hand combat is the first qualifier, and DarkMaus has that covered. It borrows the familiar stamina system wherein every physical action drains your energy and blocking slows the process of recovering it. "Tough but fair" is the mantra of Souls fandom, because enemies abide by the same rules that you do, making battles harsh but readable. That delicate balance would be disrupted by bad physics, unresponsive controls or poor hit detection, all of which DarkMaus impressively avoids. While the game is meant to overwhelm and punish you, it never throws into question why you died or dumps you into situations that you can't immediately learn from. 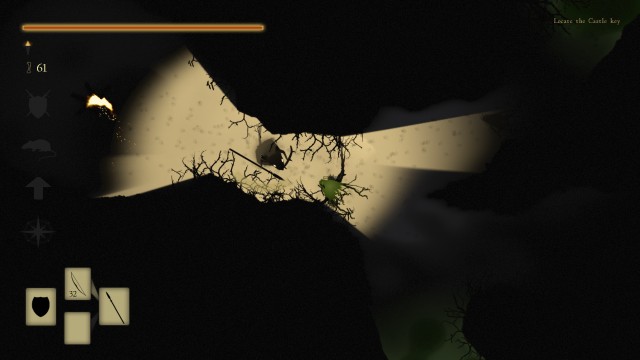 The parallels with Souls are many and unabashed. Bonfires serve as the checkpoints, experience (here manifesting as bone marrow) is lost when you're killed but can be recovered if you make it back to the spot of your death, and the NPCs even do that thing where you have to engage them multiple times if you want all of the important dialog. More broadly, as befitting two games with the word "dark" in their titles, both share an oppressively somber tone, set in intimidating worlds in which the dead are doomed to be reanimated again and again, and to enthusiastically want your blood drawn.

You may have guessed from the title that DarkMaus is rodent-themed, but that gimmick barely serves any purpose and certainly doesn't make the game cute. Most of what you see here is presented in stark black silhouettes, inviting comparisons to Limbo that extend to the entire audiovisual presentation, particularly the ambient soundtrack. The stylistic choices here probably made the project more logistically manageable for Wright, since nothing's drawn in tremendous detail, but the atmosphere plays as big a role in this formula as the mechanics, and DarkMaus's minimalistic look totally works.

Of course, the most notorious attribute of the Souls games is that they're unwelcoming  they're long, brutal and full of complex but hazily-explained systems. DarkMaus, in comparison, is relatively bite-sized at only seven or eight hours, and the game offers not only solid tutorials but actual advice on how best to utilize different abilities and weapon types. The checkpoints are also considerably more merciful, so while this game feels tuned specifically for existing Souls fans, it's a lot more accessible. I daresay this might be a solid entry point for those who found that series impenetrable. 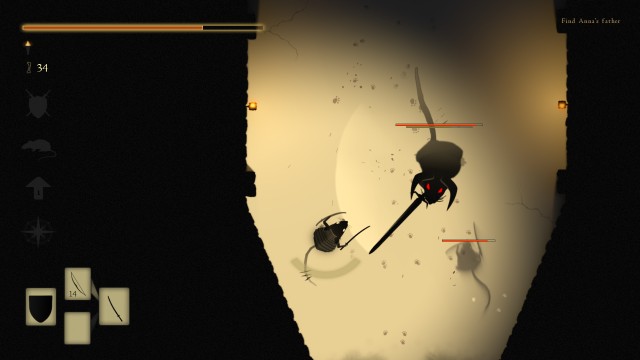 It's still challenging, though, and I particularly liked how the enemy types often exhibit vastly different AI behavior  the spiders in one of the opening regions are particularly clever in the way they refuse to face you head-on and use their numbers to your disadvantage. And while DarkMaus isn't huge, there's significant reward for the curious, particularly in the way its cryptic lore is presented. Unfortunately, I don't see this release ever getting the obsessive community scrutiny that Souls has, which begs the question of whether certain plot elements are deliberately foggy or genuinely incomplete. The ending, for example, seemed like a total non-event to me. Maybe that's the game's fault, or maybe I just missed something. A From Software game would get the benefit of the doubt, but I don't know how smooth Wright is.

There's one thing that DarkMaus gets unambiguously wrong, however. It's a late-game, heavily trap-laden dungeon that's obviously supposed to serve as an homage to Sen's Fortress but feels too reliant on twitch skills; even once I'd memorized the paths, I was still getting torn up for getting convoluted dance routines a couple of frames off. It feels like something that belongs in a shmup, not an action RPG that puts so much stress on care and not pursuing greedy instincts.

That is, however, the only major flub in what is otherwise an impressively faithful homage to a series  heck, now a full-blown subgenre  that I'm always hungry for more of. That it's such a pure indie project, made by one fan trying to serve many others, makes it all the more inspiring. I have no doubt we'll see more soulslikes soon, and I hope they're all as on-point as DarkMaus is. I mean, hell, maybe I'll try making one myself.

If you enjoyed this DarkMaus review, you're encouraged to discuss it with the author and with other members of the site's community. If you don't already have an HonestGamers account, you can sign up for one in a snap. Thank you for reading!

© 1998 - 2022 HonestGamers
None of the material contained within this site may be reproduced in any conceivable fashion without permission from the author(s) of said material. This site is not sponsored or endorsed by Nintendo, Sega, Sony, Microsoft, or any other such party. DarkMaus is a registered trademark of its copyright holder. This site makes no claim to DarkMaus, its characters, screenshots, artwork, music, or any intellectual property contained within. Opinions expressed on this site do not necessarily represent the opinion of site staff or sponsors. Staff and freelance reviews are typically written based on time spent with a retail review copy or review key for the game that is provided by its publisher.