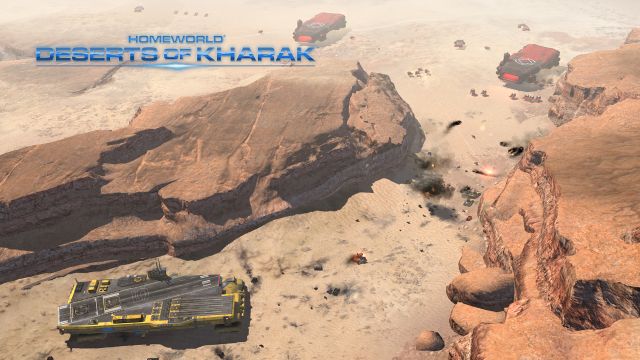 I take no pleasure in writing this. I'd hoped that by now, my campaign run with Homeworld: Deserts of Kharak would be a couple of weeks behind me, as would my glowing review. I think I'm close to the end now, but it's gotten to the point where the game's framerate slows nearly to single digits when things get intense. And they're always intense. It's an RTS. It's not like these things get less hectic as they progress.

I've been waiting for Deserts to get patched. Maybe it will someday. I've seen forums full of people making the same complaints that I have, so it's not an isolated issue. It's a wonderful game on every other level, and maybe at some point in the future I'll be able to appreciate that, unconflicted. But here, now, in its current state, Deserts is a technical shambles, unworthy of the tremendous efforts put forth to make this prequel live up to its namesake.

What a missed opportunity that is when you consider how miraculous it is that Deserts even exists. It was originally conceived as a spiritual successor to the franchise, and developer Blackbird Interactive has the credentials, since it was formed by ex-members of Relic, the team that created Homeworld in the first place. That alone would be enough, but when the license landed in Gearbox's hands, the two companies got in touch and the project formerly known as Hardware: Shipbreakers was officially inducted into the franchise.

So instead of simply getting a real-time strategy game that reignites the spirit of Homeworld  from the same minds, no less  we're getting all of that plus a prequel story, one that chronicles the discovery of hyperspace technology that would eventually lead to the events of the original game. The main character's name is Rachel S'Jet, and that alone should ring a bell if you've played Homeworld.

Of course, if you have played it, you know that its biggest contribution to the RTS genre was the introduction of the Z-axis. Being set in space was such a defining characteristic of Homeworld that it's fair to wonder how a ground-based RTS can call itself a successor. It turns out that there's more to the series' distinctive formula than that, and Deserts more broadly recaptures the sense of a small, core group of units venturing into the seemingly never-ending unknown for the sake of its own survival.

Very few video games can make open desert an interesting setting, but its overwhelming scope and lack of barriers makes it the perfect stand-in for an environment defined by its endlessness. The rolling dunes are scalable but nevertheless limit visibility, lending to the feeling that anything can come from anywhere at any time, and you might not know it immediately. The campaign follows Rachel's "fleet" (as it's still called, even though it's land-based) as it ventures deep into enemy territory, and while nothing could beat the original Homeworld's setup for isolation, there's still the unshakable sense that you're on your own out here, and that any potential backup is too far away to make a difference. What you see is what you get.

The most immediate homage that Deserts makes to its predecessors is the Kapisi, a carrier vessel that replaces Homeworld's mothership as your mobile base of operations. It's the centerpiece of the fleet and gives the game a functional protagonist, making Deserts somewhat approachable where many RTSs tend to become micromanagement rodeos. It's the only unit with limited movement it can't climb hills or squeeze through tight gaps  and as such, your mission inevitably forces you beyond the Kapisi's reach. That always left me uneasy, as it's meant to. You must frequently assess the risk associated with your actions, knowing that the Kapisi  which must survive  might come under attack while your most powerful forces are investigating the far end of the map.

As you might ascertain from the game's original title, Deserts revolves heavily around scavenging shipwrecks for parts. Whether you use those parts to build more units or improve the ones you already have is up to you, but resources are mandatory and finite. If you decide to play with "fleet persistence" enabled, your group will carry over from one mission to the next, meaning that losses are permanent and gambles carry that much more weight. This was one of my favorite features in the previous Homeworld games. I'm glad to see it return, though it can be turned off from the mission select screen if you find it too harsh.

While I approach Deserts as a veteran of the series, the game shouldn't be terribly overwhelming even to those inexperienced with Homeworld. The core combat's pretty easy to wrap your head around, since the light, heavy and ranged units are weighted against one another much in the style of rock-paper-scissors. Blackbird is careful not to dump too much on you too early, with important mechanics like attack aircraft being unveiled only after you've spent plenty of time mastering the basics. And while this is an RTS, the unit limit is relatively small and objectives tend to be straightforward enough that you'll almost never be forced to juggle more than a couple of perspectives at once.

This all points to a victorious return to form for the Homeworld series, especially on the tail of the well-received Remastered Collection. Had this been a stable product, that may well have been the case.

For whatever reason, despite arriving exclusively on PC, Deserts is horrendously optimized. I and many others can report crippling performance problems regardless of settings, even on powerful rigs. I wasn't kidding when I said that the framerate tanks very nearly to single-digits in some of the later missions, and while I get that this is a game in which a lot can be happening on-screen at any given time, that's no excuse for the level of technical infidelity I've experienced here. If I can run The Witcher 3 on maximum settings with nary a hitch, there's no good reason that reducing Deserts' particles, draw distance and resolution to borderline PS2 quality should still bring the game to the crawl of a slideshow.

Since this is a real-time strategy game, I wouldn't go so far as to say that the framerate issues make Deserts unplayable, since there's really no reflex required. But even that flimsy excuse doesn't make Deserts any less unpleasant in practice, nor does it make that unpleasantness less inescapable. Mechanically, I adore this thing. I pray that I'll return one day to find that it has been patched so that I can finally enjoy it in full. For now, though, Homeworld serves as a sad example of terrific potential was squandered thanks to technical ineptitude.

If you enjoyed this Homeworld: Deserts of Kharak review, you're encouraged to discuss it with the author and with other members of the site's community. If you don't already have an HonestGamers account, you can sign up for one in a snap. Thank you for reading!

© 1998 - 2022 HonestGamers
None of the material contained within this site may be reproduced in any conceivable fashion without permission from the author(s) of said material. This site is not sponsored or endorsed by Nintendo, Sega, Sony, Microsoft, or any other such party. Homeworld: Deserts of Kharak is a registered trademark of its copyright holder. This site makes no claim to Homeworld: Deserts of Kharak, its characters, screenshots, artwork, music, or any intellectual property contained within. Opinions expressed on this site do not necessarily represent the opinion of site staff or sponsors. Staff and freelance reviews are typically written based on time spent with a retail review copy or review key for the game that is provided by its publisher.