T-MEK on the 32X isnt a success story. Big shock there, right? That obscure game on that obscure system that sold really poorly didnt find any kind of acclaim? But its more than just being unable to claw its way out of anonymity. My maddening trek through the forgotten world of 32X has often surprised me with the amount of crushingly pointless and obsolete effort some of the developers poured into games that no one was ever going to buy. The system had some power behind it - that was never in question; it just had a tiny window of relevance before it became outdated. It was with this extra power that someone at Atari thought porting T-MEK would be a good idea. Maybe it could have worked. But it didnt.

Before it was sucker-punched with what will have to be labelled as an awful port, it was a quarter-munching arcade monster. Half death-match and half tourney fighter, T-MEK threw you inside a massive hulking tank then asked you to destroy up to four of your friends with explosive rounds or streams of armour-melting acid. Much like the fighters in Mortal Kombat, the tanks you controlled were digitized, animated photos, a look which was pulled off sufficiently in the arcades. Mainly because it was effectively four arcade cabinets welded together so regardless of how many people were live or what was happening with another player, the game didnt take any kind of processing hit. The 32X did. 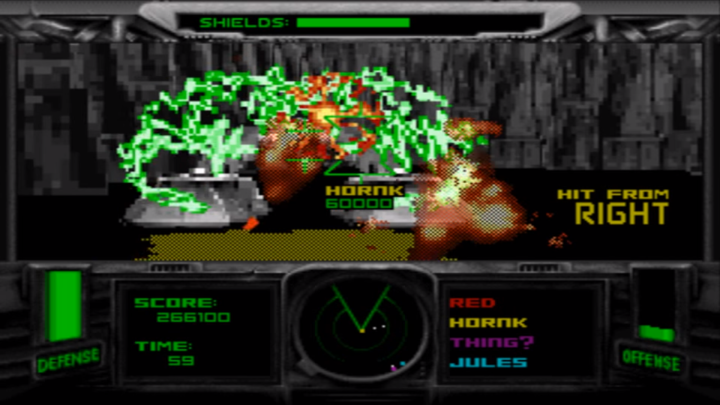 The quasi-console isnt to blame for all of T-MEKs ills. Theres a single player mode included, but the arcade strain lived and died on pitting friend against friend in explosive battles. The 32X had no netplay options, no way to connect a second console to shoulder some of the burden, so what was once a glorious four-way blood bath became a squalid two player affair. What was once four screens of uninterrupted tank-on-tank warfare became one split-screen filled with struggle and squinting at muddy polygons. Two player was an option in the sense that you could select it, but what it produced wasnt something functional. With your circumcised slice of screen, you simply did not have the scope available to keep track of multiple opponents while the strained engine struggled to keep up with dual draw distances and rendering. Then the lag hits. Then you lose.

So, the games most viable and marketable trait doesnt work and Ataris attempted workaround is a bust. But you can still enjoy the single player campaign, right? That bit included in the arcade that no one ever had any interest in playing? T-MEKs single player works like a tournament wherein you choose your tank (out of a possible six), slap on a special weapon and try to climb the ladder. To do so, you need to finish an arena battle with the highest number of kills. It was tricky to get far in the arcade; the bot tanks had unnerving accuracy and always seemed to plug other tanks with their special attacks without fail. The 32X bots are easily destroyed idiots.

Mainly, this comes down to their inability to pathfind. Doesnt matter what the obstacle is - a part of the arena, another bot or even your own tank; the enemy will roll right into it and then, as if it doesnt really believe theres something there, keep accelerating. It wont reverse out, but it will sometimes keep firing while it grinds against whatever its come into contact with, which can sometimes free it. Parts of the arena are destructible, so it can sometimes remove an obstacle this way. Destroyed opponents do leave their burning husks on the battlefield, but live tanks can roll over them and even use them as impromptu ramps to take to the air for a few seconds of pointlessness. But before they free themselves from the shackles of stupidity theyve clasped on themselves, theyre literal stationary targets for you to blast. 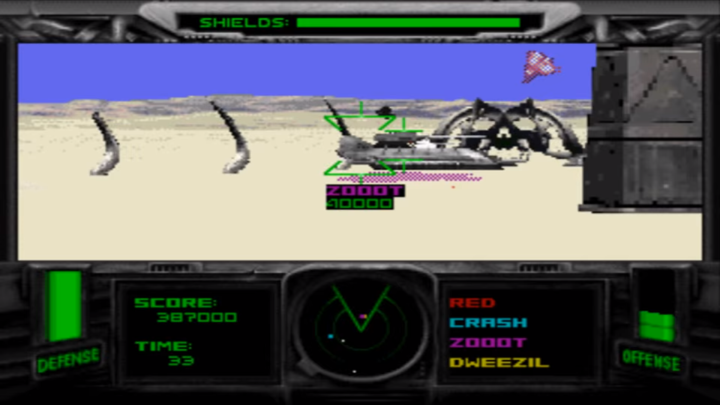 This doesnt always happen, but youll probably see at least one instance of it per battle. The other downfall is that though opposition tanks still look blocky and undefined at a reasonable distance, having either they or a chunk of the arena pushed up in your face leaves you with a screen full of flat pixel blocks. If theyre more than a reasonable distance away, T-MEK doesnt have the draw to factor them in, which might have been a cheap threat if they werent probably dry humping a pillar.

I still harbour fond memories of the arcade game. Guiding a controllable homing missile into the backside of an unsuspecting chum, or bouncing blinding bombs off the walls into someones face and watching their screen dissolve into static for a while. I remember pulling my tank into an unlikely sharp drift to avoid incoming fire, or to set up my own corridor of attack. These options are either unavailable or rendered useless by the 32X port as it chugs away at an engine it should be able to handle comfortably. But it doesnt; it struggles every step if the way. Then the lag hits. Then you lose.

If you enjoyed this T-Mek review, you're encouraged to discuss it with the author and with other members of the site's community. If you don't already have an HonestGamers account, you can sign up for one in a snap. Thank you for reading!

© 1998-2021 HonestGamers
None of the material contained within this site may be reproduced in any conceivable fashion without permission from the author(s) of said material. This site is not sponsored or endorsed by Nintendo, Sega, Sony, Microsoft, or any other such party. T-Mek is a registered trademark of its copyright holder. This site makes no claim to T-Mek, its characters, screenshots, artwork, music, or any intellectual property contained within. Opinions expressed on this site do not necessarily represent the opinion of site staff or sponsors. Staff and freelance reviews are typically written based on time spent with a retail review copy or review key for the game that is provided by its publisher.