Theres a faceless, fragile-looking little boy on my screen floating through the vastness of space, clinging to a bunch of peculiarly shaped balloons tied with string. Hes drifting, it seems, towards a lumpy blue planet in the distance, the subtle movements of my mouse altering the pitch and yaw of his flight, and for a split second everything is tremendously peaceful. But then something else comes into view: something black and prickly like a mass of unworldly, pulsating brambles is swarming this way. Pop. A balloon bursts. I steer the boy and his remaining balloons as far right as I can in search of a safe path through this celestial minefield, but the black shapes are now not only far greater in number but, I could swear, actively seeking him out. Pop, pop. Two more gone. And then the futility of it all hits: the rules and conventions of video games, of what constitutes a fair fight, do not apply here. In much the same way that this boys family had the odds stacked firmly against them from the start, I dont have enough control over the situation, my young charge is far too weak to fight, and the prickly, twitching black mass just keeps coming. Theres no way hes going to make it. 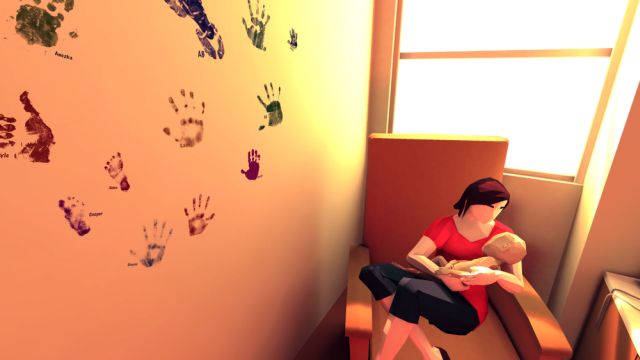 With the number of digital column inches dedicated to it during its time in development, its highly unlikely that you havent heard of That Dragon, Cancer by now. An autobiographical point-and-click outing for PC, Mac and Ouya telling the story of a young American couple whose son, Joel, was diagnosed with cancer at the age of one, this isnt a purchase that one makes lightly. After all, the idea of sitting down to play a game whose inspiration came to its director, Joels own father, while he reflected on a particularly tortuous evening his son endured during a round of aggressive chemotherapy, does not sound like a fun afternoon in the park. There are far happier virtual worlds out there to explore; towers to be defended; tombs to raid.

Im confident, however, that those of you who do take the plunge and play That Dragon, Cancer will be glad you did.

Lasting no more than two to three hours, the game can be easily cleared in a single afternoon. The player progresses the story by interacting with objects dotted around the game world--paintings hung on hospital walls, greeting cards, profoundly personal journal extracts narrated by Joels family members--all the while watching and listening as difficult conversations are had and, as the little boy at the centre of it all fights for his life, relationships are tested to breaking point. 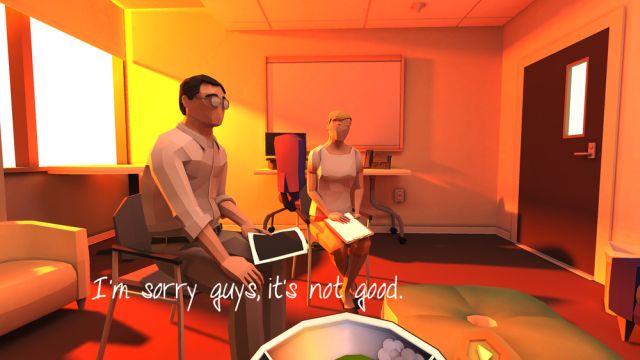 Visually, That Dragon, Cancer is very simple, featuring blocky, largely faceless character models and environments with limited textures throughout, but the game does a surprising amount with what it has, and the use of colour and lighting to reflect the mood of the characters especially has to be applauded. Chapters are set in a number of different locales, too, from woodland parks and neutrally decorated hospitals to more dreamlike locations like the aforementioned episode in space. Theres plenty of variety to be had here, and the game uses numerous visual devices to drive the plot forward, such as a brief side-scrolling arcade game section and by placing a spin-and-speak preschool toy in the players hands and having it replay conversations held in a hospital consultancy room in place of farmyard animal sounds.

The game is not without its issues--on more than one occasion I found myself unsure of how to move the story forward, examining the same areas over and over until I discovered the one item or movement that would trigger the next section to start, and the frequent mentions of and allusions to faith and God (Joels parents are both devout Christians) left me, as an atheist, feeling somewhat emotionally detached at times, but in fairness to the game and its creators, That Dragon, Cancer does not pretend to be a create-your-own feels simulator designed to suit the players personal tastes and beliefs; this story is theirs, not ours, and part of what makes the game work so well is its distinctly personal nature. 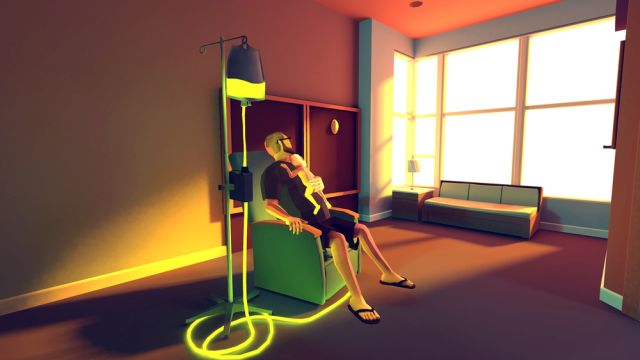 Narrative-based games tend to be dismissed in some circles as largely passive experiences that do little to warrant the label of game. There may be some truth to that--Im sure we could fill multiple pages discussing where a game begins and an interactive experience ends--but when one finds oneself in a in-game hospital room caring for an infant child who is raging and thrashing and screaming with pain, one instinctively, as a player rather than a spectator, tries to find something, just as Joels father recounts himself doing, to comfort this tormented little boy and put an end to the screaming. Its at moments like these that That Dragon, Cancer, in its own haunting, heartrending way, shines, giving players a real taste of what its like to be in a situation like that in which Joels parents found themselves; it is anything but a passive experience. The fact that this familys experiences have been crafted into a video game rather than a TV documentary or a novel goes to show just how much potential our medium has, not just for delivering entertainment and challenging our reflexes but for creating increasingly emotive experiences that deal with issues that affect so many of us but rarely go discussed due to their unpalatable nature.

Its unlikely that youll want to return to That Dragon, Cancer once the end credits roll, and theres a good chance this will be one of the saddest games youll play, but it is nevertheless an experience that I urge you to undertake at least once.

If you enjoyed this That Dragon, Cancer review, you're encouraged to discuss it with the author and with other members of the site's community. If you don't already have an HonestGamers account, you can sign up for one in a snap. Thank you for reading!

© 1998-2021 HonestGamers
None of the material contained within this site may be reproduced in any conceivable fashion without permission from the author(s) of said material. This site is not sponsored or endorsed by Nintendo, Sega, Sony, Microsoft, or any other such party. That Dragon, Cancer is a registered trademark of its copyright holder. This site makes no claim to That Dragon, Cancer, its characters, screenshots, artwork, music, or any intellectual property contained within. Opinions expressed on this site do not necessarily represent the opinion of site staff or sponsors. Staff and freelance reviews are typically written based on time spent with a retail review copy or review key for the game that is provided by its publisher.