I Didn't Even Know Cute-'em-Up Was a Thing
Opa-Opa makes a triumphant return in Fantasy Zone II: The Tears of Opa-Opa on the Sega Master System, the sequel to Fantasy Zone. The game belongs to the "cute-'em-up" subgenre (a sub-type of shoot-'em-ups that generally has brightly colored, cartoonish graphics with unusual enemy types). Honestly, I didn't even know that this subgenre of games existed, but Fantasy Zone along with Twinbee are some of the pioneers for the genre. So, what can you expect in this sequel to a subgenre pioneer? Well, expect those bright, cartoonish graphics, weird enemies, and one of the toughest, but most fun, shooters of the 8-bit era. 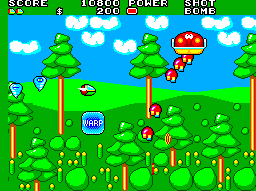 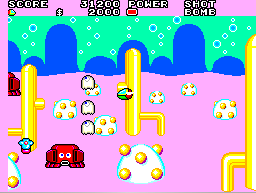 Prepare to Be Cute'd to Death
The basic premise of Fantasy Zone II is a horizontal shooter where you can freely move about a looping "scene" (stage). Each level has 3-5 scenes and a boss scene. To move from scene to scene you need to destroy bases which give you money or spawn a warp in-between the scenes. These bases each spawn enemies which add onto the pattern of baddies that are already thrown at you throughout the level. Needless to say, this all tends to add up and get super tough and hectic. Anyways, after you destroy all the bases in a level you can use a special red warp to go to the boss. The addition of warps is new to this game, and helps with the variety and game length. Also, there is a shop placed in each level where you can buy upgrades to your engines, bullets, and bombs. Another one of the differences between Fantasy Zone and Fantasy Zone II is that these shops are placed statically within the levels instead of randomly floating down throughout them. Personally, I really preferred knowing where the shops where instead of wondering when I would magically run across one. The improvements don't stop there. There are now hidden items (and shops) located in most levels. These add a minor, but appreciated, level of exploration to the game. Another great thing (and perhaps needed with the increased difficulty), is the ability to find or purchase increases to your life...so no longer are you subject to frustrating one-hit deaths.

You can mark it as an "improvement", but one of the things that really stand out about Fantasy Zone II is its graphics. To be frank, it is one of the better looking games on the Master System...and, when you consider that it is among the earlier titles released (in 1987) rather than one of the later titles...you simply become blown away. Graphics certainly don't make a game great, but that doesn't mean that having great graphics isn't a great thing. On the downside, the game looks awesome and perhaps it was too much awesome for the Master System to handle. There is slowdown, and, depending on where you are (later levels tend to throw more things at you) and what you are doing, there may be A LOT of slowdown. Normally, this is a bad thing. However, due to the sheer amount of stuff that is going on and the speed that it occurs, I actually would consider this a positive. Some modern games incorporate their own "slowdown" in the form of bullet time to handle the crazy action going on, and this game, in its own way, does the same thing. Because this game delivers crazy action by the boatload. In fact, it is almost impossibly challenging in some of the later areas. Not only are there things flying at you from all angles, but some of them move so fast that dodging them is almost hopeless...especially without a decent engine upgrade. If you add that to the fact that you lose all your upgrades when you die...you can reach an almost unbeatable scenario where your upgraded ship dies and you cannot make it to the shop to buy the upgrades you need to survive. Oh, by the way, that is if you can afford the upgrades, so make sure you have some money in the bank for your likely demise. The only other complaint about Fantasy Zone II is the fact that the music and sound effects, while fitting to the look of the game, tend to be repetitive and just annoying after a while. 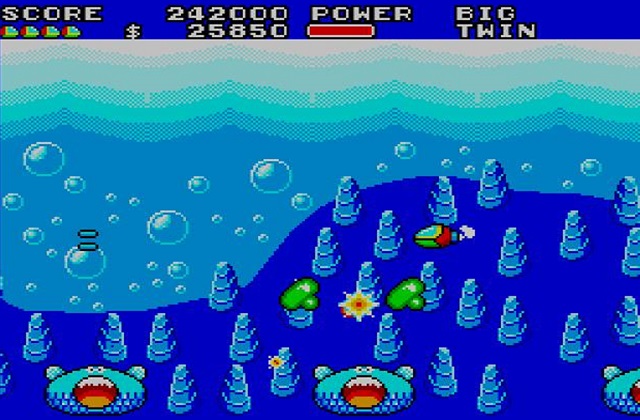 Improve on an Already Good Formula and You Get a Great Game
I'm not a fan of shoot-'em-ups and didn't really care for my brief play of Fantasy Zone. So, clearly, I had my reservations about playing this game. Thus I was pretty surprised to find myself enjoying playing Fantasy Zone II. I thought that the shop and warp systems were huge improvements over the original title. I was also astounded by just how great the game looked. I honestly have still not beat the game through a legitimate manner (I have to use save states) since it is so astoundingly difficult. However, the fact that I have played the game enough to reach the 7th level (the next to last) without "cheats", shows you that I really don't mind dumping some hours into this game. Maybe that doesn't mean much to you, but the fact that this game can pull appeal from somebody who doesn't generally enjoy that type of game means that it is just an excellent product. It is fun. It has a nice blend of upgrading your ship and some basic exploration elements. It has that classic 8-bit difficulty in spades. I'd honestly recommend for any retro gamer to try this game out, but any fan of shooters, especially, should not miss this quality title.

If you enjoyed this Fantasy Zone II review, you're encouraged to discuss it with the author and with other members of the site's community. If you don't already have an HonestGamers account, you can sign up for one in a snap. Thank you for reading!

© 1998-2021 HonestGamers
None of the material contained within this site may be reproduced in any conceivable fashion without permission from the author(s) of said material. This site is not sponsored or endorsed by Nintendo, Sega, Sony, Microsoft, or any other such party. Fantasy Zone II is a registered trademark of its copyright holder. This site makes no claim to Fantasy Zone II, its characters, screenshots, artwork, music, or any intellectual property contained within. Opinions expressed on this site do not necessarily represent the opinion of site staff or sponsors. Staff and freelance reviews are typically written based on time spent with a retail review copy or review key for the game that is provided by its publisher.