It could be argued that no game sums up the sorrowful saga that was the ill-fated 32X as well as FIFA 96 does. Both game and console were sandwiched mercilessly between two generations that were each effortlessly more relevant. Both were never really sure where they belonged, failing to eke out an existence in some shadowy middle ground that didn't really exist. Championed by few, ignored by many and point blank unknown by significantly more. A head-scratching oddity that was perhaps always doomed..

The year before, FIFA 95 was a shallow release, appearing on scant platforms, but that was never going to be the case with FIFA 96. It was everywhere; on 16-bit consoles looking for a few last gasps of relevance, on handhelds people had forgotten existed and on the newer, shinier 32-bit systems chomping for a foothold. But all efforts mostly fluctuated between prettier versions of two basic foundations; the honest and stumbling first forays into poly-drafted 3D footballing, and the tried and tested pixel simplicity of earlier consoles.

EA bought in then-independent developers Probe (pre-ruining via Acclaim) to run rule over the older consoles releases, so they also got stuck with the 32X port. It could be argued that perhaps the best thing they could have done was release a shinier version of the 16-bit Mega Drive strain - it would have been easy. Clean up the graphics, showcase the (slightly) higher pallette capability of the machine and add in some crisper sounds. If they were feeling adventurous, chuck in a few extra lower league outfits. No one would have blamed them; no one would have cared. The 32X version was released in Europe only where the quasi-consoles sales were the most disastrous. The (full) 32-bit strain was a day-one release for both the Playstation and Saturn, featuring then unheard of additions like in-game commentary and noticeably different stadiums being used. The 32X version had no hope of matching this but, bless Probe, they tried anyway. 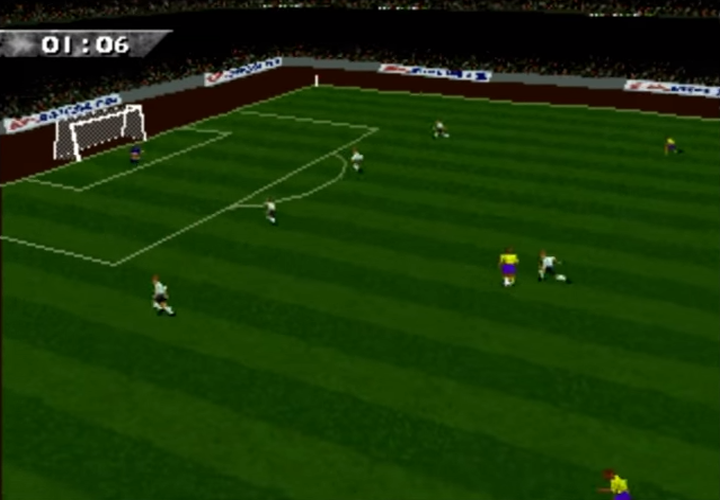 As such, it exists as this odd hybrid trapped between two worlds. Thinking itself above the world of 16-bit, it struggled instead to keep up with the bigger boys and, in doing so, only showcased how far behind it was. It, too, wanted a pop at multiple camera angles, of those polygon things everyone was raving about at the time. Its difficult to make fun of Probe for actually putting so much effort into their little Frankenstein's Monster of FIFA 96; theres genuine ambition involved to do more than offer a souped up 16-bit engine. But that doesnt stop it being awful.

In its efforts to ape its betters, all it becomes is a muddy, clumsy shadow. The limited polys combined with the lacking palette makes for a dire and gloomy looking game where character models strive to be more than they can be, and fail. Ugly, murky shades pressed into awkward shapes that are supposed to represent world famous footballers instead end up decidedly more abstract than intended, not helped at all by the low frame count that gives them a jerky spider-zombie quality while moving. Which you tend to do a lot during a game of football.

The AI is also unpredictable. Try to hold the ball up, and theres a chance the entire game will stop and wait to see what youre going to do next. Im not entirely sure how that has happened, but it means if you stand perfectly still, the opposition sometimes no longer reacts. Not even just the opposition! Your AI controlled teammates also cease all manner of functioning until you put the ball back into motion again. Does this mean that, like the mighty T-Rex, FIFA 96 players can only see objects in motion? Its certainly a novel way to run down the clock when trying to protect a fragile lead. 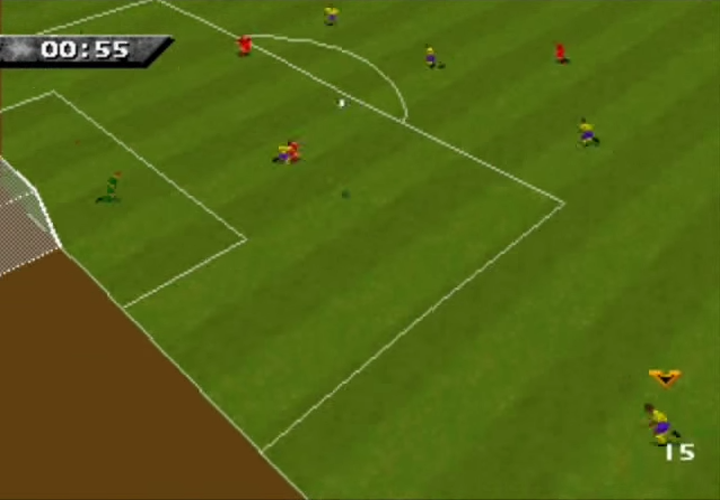 None of the camera angles seem to really work, either. None of them sync up naturally and make all manner of passes and (especially) shots difficult to competently judge. Lining things up to pass or shoot the ball to a specific point seems to be exclusive to every other football game ever made ever. Some camera angles instead fail to keep up with the run of play, offering you a view of where the action was a little while ago and ignoring where its going. Sometimes, the entire view will automatically swap itself out for a different angle while you take a set piece and youll have to manually adjust it back to the previous camera set up.

Brave decisions and ambition can only get you so far, and any lingering admiration I might register towards Probes efforts to strive for more than base obligation are ruthlessly crushed beneath the heavy tread of reality. Its a little heartbreaking in a way, because this is a bad game; theres no getting away from this. But with most bad games you can point the finger at a lack of effort that clearly was not the case here. Probe obviously tried to squeeze more out of the 32X than it was capable of giving. FIFA 96 is the end result, a port of a game effortless outperformed by the Game Gear version no one knew existed either.

But thats a completely irrelevant discussion best saved for another day.

If you enjoyed this FIFA Soccer '96 review, you're encouraged to discuss it with the author and with other members of the site's community. If you don't already have an HonestGamers account, you can sign up for one in a snap. Thank you for reading!

© 1998-2021 HonestGamers
None of the material contained within this site may be reproduced in any conceivable fashion without permission from the author(s) of said material. This site is not sponsored or endorsed by Nintendo, Sega, Sony, Microsoft, or any other such party. FIFA Soccer '96 is a registered trademark of its copyright holder. This site makes no claim to FIFA Soccer '96, its characters, screenshots, artwork, music, or any intellectual property contained within. Opinions expressed on this site do not necessarily represent the opinion of site staff or sponsors. Staff and freelance reviews are typically written based on time spent with a retail review copy or review key for the game that is provided by its publisher.