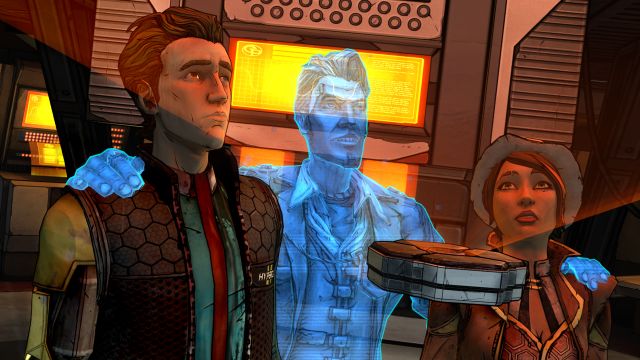 Having not read the comics that Telltale's The Walking Dead and The Wolf Among Us were based upon, there was always an ever-so-faint suspicion in the back of my mind that the developer was getting an unfair boost from other writers. For all I knew, these terrific stories were being ripped wholesale from the source material and Telltale was absconding with all of the credit.

Let Tales from the Borderlands stand as evidence to the contrary, then, because this one is all Telltale. As much as I enjoyed the Borderlands games, I barely remember them even having stories, so why anyone thought this universe would be a proper starting line for a plot-centric point-and-click is anyone's guess. It'd be like Telltale doing an adaptation of Minecraft, which is (a) actually happening and (b) turning out as poorly as it sounds, at least from what I've heard.

But Tales is nearly as engaging and heartfelt as any of the team's previous projects, and the Borderlands license turns out to be a distinguishing factor  for once, we get to watch Telltale work its magic without making us want to hang ourselves from guilt and emotional exhaustion. Not that the writers use the comedic tone as an excuse to abandon solid character development and weighty choices, but this is a funny, lighthearted space jaunt, perfectly in keeping with the spirit of the series. Even Telltale's usual fixation on gore is played for laughs rather than shocks.

The game juggles control between two new characters: Rhys, a Hyperion lackey perpetually encaged in corporate politics, and Fiona, a con artist living down in the sticks on Pandora. Rhys and his friend Vaughn get the idea to purchase a Vault Key using embezzled funds, but the deal winds up being a sting staged by Fiona and her sister Sasha. The situation goes south for everyone involved, but the two protagonists unwittingly become partners when they catch wind of an Atlas project that their common enemies want dibs on. Also, Rhys is haunted by the ghost of dead series villain Handsome Jack, here manifesting as an AI construct trapped in Rhys's cybernetics. 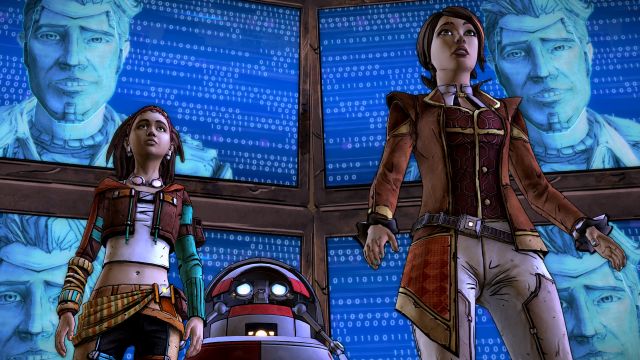 I know that comedy-themed space opera isn't exactly a recent invention, but Tales invites some pretty strong comparisons to Guardians of the Galaxy, not in the least because it's got a terrific licensed soundtrack, or because one of the characters gets confused by the word "metaphor." Both stories are about good-hearted people made criminal by the harsh circumstances in which they thrive. Rhys, in particular, is a surprisingly sympathetic character. What member of the middle class hasn't wanted to steal ten million dollars from the company that they work for and make the getaway in their boss's car?

So while this is perhaps the first Telltale release I've played that doesn't confront players with deep-seated questions about the necessity and consequences of violence, well, it finds ways to ring true regardless. Borderlands is full of wild caricatures and overblown sitatuations, but the four people at the heart of Tales are among the most well-rounded and believable in any game I've played this year  relatably self-serving, but also vulnerable, out of their depth and (this is the big one) desperate for someone to trust. These characters don't learn to work together simply because the plot requires them to; they actually need friendships.

Not that it's overly touchy-feely. The game's actually got a lot of solid laughs, often derived from the ongoing naïveté of Rhys, who's lived his life in a white collar environment and clashes pretty heavily with the anarchic environment of Pandora. Also, Borderlands almost certainly has a new fan favorite in Loader Bot, who dominates the game's first action scene and whose unflinching loyalty to the team  he is a robot, after all  is both hilarious and adorable.

And the sense of humor helps, you know? It brings these characters to our level when we know that they can be silly about things. Anyone who's been playing Telltale's take on Game of Thrones knows how much of a deathtrap it can be to center story entirely on bland, one-dimensionally stoic leads, so sharing laughs with the protagonists and knowing that they acknowledge the absurdity of these situations goes a long way. 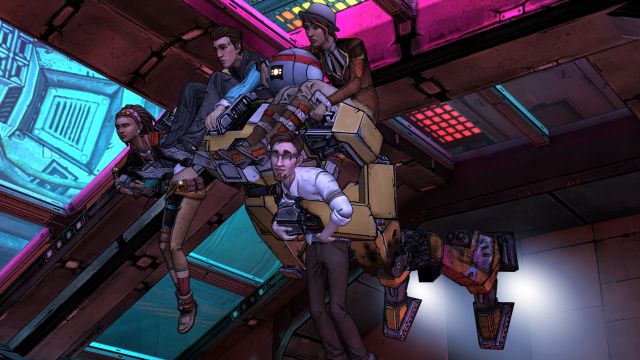 Having said all of that, Tales is still pretty familiar territory in a lot of ways. It follows Telltale's formula without deviation, and that's not always charming: the engine grows more dated by the year, animations are as stilted as ever, and I really wish Telltale would get over its insistence on taping quick-time events to actions that characters should be well capable of performing without our help. It's just an illusion of control that comes across as self-justification on Telltale's part to be making games rather than movies. We don't need these forced levels of interactivity; the writing, and the choices we have over it, is more than enough.

Unfortunately, Tales does hit a major hitch in its final episode (of five). There comes a point in which the major conflicts have been dealt with, character arcs are complete and a cute twist bridges the gaps between the central narrative and the framing story (in which Rhys and Fiona recount their adventure, often with questionable accuracy, to a masked captor). But then Telltale tacks an absolute slog of an epilogue onto the whole thing, involving what can loosely be called a "final boss" that's just a prolonged series of quick-time events against an enemy we've never seen before.

This is the one time that Telltales's slavish devotion to the source material is a hindrance. If I want a proper Borderlands game, I'll go play a proper Borderlands game. I play a Telltale point-and-click for strong writing and pacing, and the final segment of Tales serves no narrative purpose other than to give us an empowering goal point and echo character developments that we could've picked up on ourselves. Maybe I'm just particularly weary of high-profile games ending poorly at the moment, but it's disappointing to see the game's otherwise breakneck momentum so soundly brought to a halt at the finish line.

So Tales ultimately lacks the tightness of some of the company's previous work, but this is still another gold star for one of the industry's most prolific storytellers. It's funny, heartwarming and utterly rip-roaring, and bonus points for mining such strong material out of a universe I'd dismissed as a collection of forgettable chuckles. I'm still not interested in Minecraft: Story Mode, but you win this one, Telltale.

If you enjoyed this Tales from the Borderlands: A Telltale Games Series review, you're encouraged to discuss it with the author and with other members of the site's community. If you don't already have an HonestGamers account, you can sign up for one in a snap. Thank you for reading!

© 1998 - 2022 HonestGamers
None of the material contained within this site may be reproduced in any conceivable fashion without permission from the author(s) of said material. This site is not sponsored or endorsed by Nintendo, Sega, Sony, Microsoft, or any other such party. Tales from the Borderlands: A Telltale Games Series is a registered trademark of its copyright holder. This site makes no claim to Tales from the Borderlands: A Telltale Games Series, its characters, screenshots, artwork, music, or any intellectual property contained within. Opinions expressed on this site do not necessarily represent the opinion of site staff or sponsors. Staff and freelance reviews are typically written based on time spent with a retail review copy or review key for the game that is provided by its publisher.