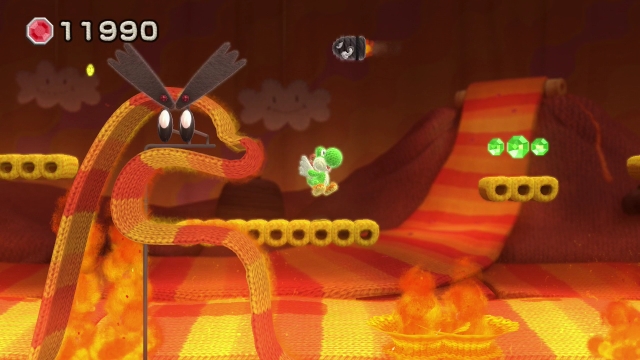 After two recent sad-sack sequels and whatever the hell Yoshi's Story was supposed to be, you wouldn't think a game like Yoshi's Woolly World would bounce so hard off me. I'm of the opinion that Yoshi's Island is better than nearly any mainline Mario game. This latest yarn-themed release is the series' most potent return to form yet, plus it ditches the crying baby and boasts one of the most original aesthetics of any mainstream game in years. This should be gold. So why is it just... okay?

As it turns out, the formula just isn't as special as it once was, and certainly not magical enough to keep this 48-stage behemoth rolling at a steady pace. It's got a nifty visual hook, but disregarding a couple of creative novelty levels, its few mechanical innovations feel continually less fresh over the course of the dozen or so hours necessary to finish the game. The simple promise of playing as Yoshi, swallowing enemies and then throwing them about, is no longer enough to distinguish Woolly as anything more than just another cutesy platformer with a confused focus on collectibles, the sort of thing Nintendo could churn out in its sleep.

But, yes, it's quite lovely to look at  even more so than Kirby's Epic Yarn, which used a similar theme, albeit for simple two-dimensional outlines that didn't put a major stress on the Wii's weak processing power. In Woolly, everything's fully rendered in-engine, and it's the sort of thing that makes you wonder how we went so long without playing Nintendo games in HD. The Yoshis look like Hacky Sacks, and everything in this world follows that consistent theme, resembling something knitted together using materials found in an arts-and-crafts store. However good it looks in screenshots, though, it's a hundred times more beautiful in motion, provided you're playing with the GamePad (there's a weird bug where the game's framerate skips if you're using the Pro controller).

The yarn theme isn't just an aesthetic gimmick, either; it often affects how the game is played. Hidden areas, for example, are unearthed by tugging on loose threads and physically unspooling obstructions. Yoshi now turns his enemies into balls of yarn rather than eggs, and they can be used to create new platforms and objects by wrapping them around (and thus solidifying) wireframe structures. A couple of crafty early puzzles involve repeatedly sedating and reanimating a Chain Chomp in this manner. 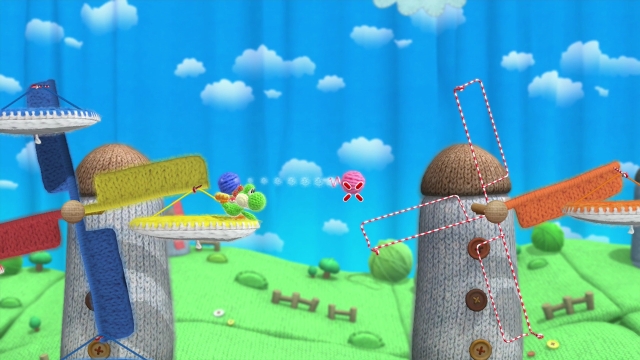 But spanning six worlds with eight levels apiece, Woolly overstays its welcome. A big factor in its misplaced nostalgia is the way the game handles, i.e. without analog. Even Yoshi's Story, dull and uninspired though it was, gave us full control over the direction Yoshi's tongue went, and where exactly eggs could be thrown. Here, it's back to that system where you have to hold an attack button while a reticle metronomes back and forth. That was a fine compromise in the SNES days, but now that we've got analog sticks  two of them, in fact  this control scheme incessantly drags down the experience. Shooting challenges that would be intuitive in any other modern game bring Woolly to a halt.

Admittedly, much of this arbitrary struggle is dampened if you choose to ignore the collectibles, which Woolly places a big emphasis on but largely refuses to justify. Gems are used to buy cheats (meaning I never once spent any of them), stamps are for drawing little illustrations to be shared for others on the load screens (I think  again, I never used them), and I got through the entire game without figuring out what the hell the flowers are for. The only worthwhile collectibles are the yarn bunches, because if you collect all five in a single stage, you unlock a new Yoshi  and while they're all functionally identical, some of the bizarre color schemes that they've come up with at least give the proceedings an extra dose of personality, even more than the game already had.

A lot of these collectibles are a bit too well-hidden for their own good, by which I mean that they're often obscured behind trick walls or triggered by switches that are literally invisible unless you happen to pass over them or happen to throw a yarn ball in their direction by chance. The game's checkpoint system doesn't help, either, because if a large room contains a lot of collectibles, you've got to go back and individually fetch them all over again if you accidentally die before the next save  which is wont to happen, since Yoshi's hover-jump is as tricky to pilot as ever and Woolly is full of insta-death pits.

Of course, if you take the completionist hook out of Woolly, all you're left with is a 2D platformer that cycles through the usual tricks  some swinging here, some raising of water levels there  with only the bare minimum number of one-off gimmicks necessary to keep this thing's momentum going. Again, it's a monster of a release, and it gets surprisingly difficult in its latter half, perhaps overly so. A game like this should be breezy and innocuous, not an epic-length endurance test. It's a weird lack of restraint from a company that, at the very least, seems to know what it does well. It's fine, I guess  utterly adorable, and enjoyable enough in short, controlled bursts. Shame that a short, controlled burst is the last thing Woolly is.

If you enjoyed this Yoshi's Woolly World review, you're encouraged to discuss it with the author and with other members of the site's community. If you don't already have an HonestGamers account, you can sign up for one in a snap. Thank you for reading!

© 1998 - 2022 HonestGamers
None of the material contained within this site may be reproduced in any conceivable fashion without permission from the author(s) of said material. This site is not sponsored or endorsed by Nintendo, Sega, Sony, Microsoft, or any other such party. Yoshi's Woolly World is a registered trademark of its copyright holder. This site makes no claim to Yoshi's Woolly World, its characters, screenshots, artwork, music, or any intellectual property contained within. Opinions expressed on this site do not necessarily represent the opinion of site staff or sponsors. Staff and freelance reviews are typically written based on time spent with a retail review copy or review key for the game that is provided by its publisher.