After surviving the series of events depicted in 2013's Tomb Raider reboot, Lara Croft has come to realize that there are strange and fantastic things hidden throughout the world. In Rise of the Tomb Raider, she means to find one of them. Her latest adventure takes her to the Siberian wilderness in search of the fabled city of Kitezh, a mythical place her father squandered all of his credibility as a historian and archaeologist trying--and failing--to find. She's determined to reach her fabled destination before the evil organization known as Trinity can beat her to it and claim it.

It's clear that the misadventure in Yamatai has changed Lara. She's neither the frightened girl she was at the beginning of the previous game, nor the killing machine she was by its conclusion. She's tough, bright, and capable. She's also not thrilled by the idea of fighting and killing Trinity's men, but she's prepared to do what she must. More than adventure, she seeks knowledge, and she understands fully the weight of her situation.

Adventuring in Siberia means lots of mountain climbing, and in turn, lots of snow and ice. Despite the abundant supply of white stuff, Rise of the Tomb Raider features a wide variety of distinct environments to explore and traverse, from naturally-occurring areas like snowfields and caves, to man-made Soviet bases and other locales. There are even underwater segments. Lara somehow manages not to freeze to death when swimming in these icy waters (she's pretty good at hiding the thick layer of fat she must possess in order to survive these frigid conditions so easily). Several areas feel more open than most spots in the previous game, giving you lots of room to explore. There are animals to hunt, materials to gather for crafting, and even a few side quests to undertake. 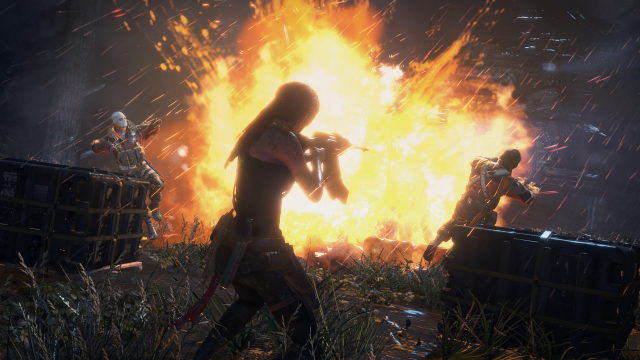 Of course, there are also tombs to raid. These dungeon-like areas feature puzzles that help to fill the void the Prince of Persia series left in our hearts when it disappeared so many years ago. Each tomb possesses its own large, multi-step puzzle to solve, often requiring various pieces of gear that Lara accrues on her adventure. Each tomb contains a codex describing a new skill for the heroine (instead of a piece of a gun, which was one of the weirder things about the previous game), so they're always worth exploring as soon as possible.

Mechanically, Rise of the Tomb Raider feels mostly the same as the 2013 reboot did. You run, jump, and climb to traverse environments. Combat is still lots of fun, with even more types of weapons and ammo at your creative disposal. Fire arrows explode like molotov cocktails now, for instance. Random bits of trash can also be crafted into explosives on the fly. Lara even finds a way to booby trap enemy radios. In short, you have plenty of options for any combat situation. This sort of ingenuity explains how one young woman manages to take down an army.

Lara acquires a wider variety of skills, tools, and weapons not only by completing the story campaign, but through other optional means. Her trusty bow is back, along with a few new arrow types. One even produces a cloud of poison that is capable of damaging multiple enemies at once. Her pickaxe can be upgraded with a rope, adding the functionality of a grappling hook and making it easier to reach high ledges or swing from certain objects. At first it feels like this particular tool is only useful in specific scripted contexts, but it's actually a useful way to creatively move around numerous situations and areas, including those you've already explored. 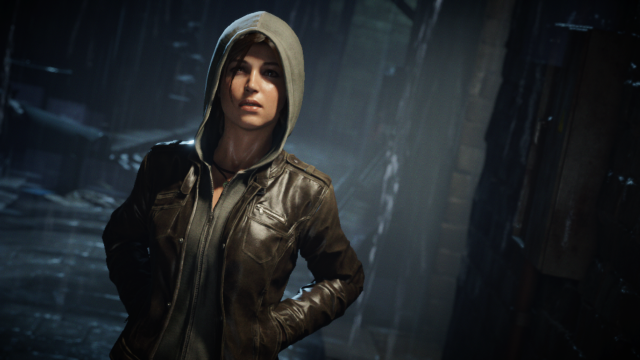 Rise of the Tomb Raider is one of those games that makes you feel increasingly powerful as you progress, thanks to the new skills and moves. You can replay chapters in Expedition mode, either with or without any upgrades you've unlocked, and you'll earn credits for any challenges you complete in the process.

Credits can also be purchased with real money. They allow you to invest in card packs, which augment future replays of your favorite chapters. Beneficial cards also decrease the score you are rewarded, but detrimental cards increase it. That's an interesting way to squeeze some extra replay value out of the game, but its impact is limited because most cards are consumable. Use them once to grant you a new weapon or make enemies explode after you loot them, then play through one chapter one time with these new effects before they're gone forever. A few cards, marked with gold borders, can be used repeatedly, but the bulk of them are gone in a flash.

Though interesting, cards ruin the score attack nature of the Expeditions. You can load up on detrimental cards to give yourself a huge score multiplier, but generally only for a single attempt. Do it right the first time or that's that; you've missed your shot. Then it's time to either earn or buy more credits, so you can acquire more cards and make another attempt. The effort isn't really worth it. Thankfully, though, the card system only affects this one mode. It's also completely optional, especially if you just want to use that mode to replay levels for fun. 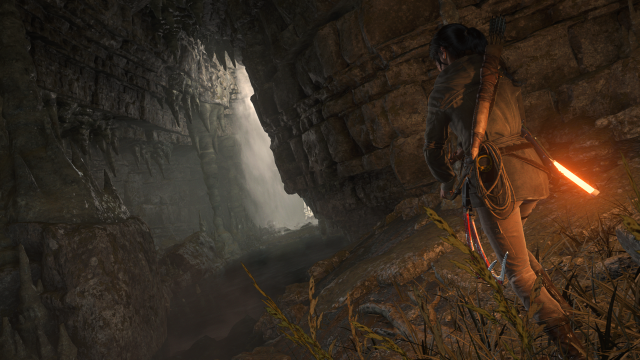 Rise of the Tomb Raider is a strong game, aside from the Expeditions mode quirks. In most respects, it represents a step up from its predecessor, which was already pretty great itself. If you enjoyed Lara's previous adventure, you'll want to check out this follow-up as soon as you can. It's nice to see Tomb Raider and its heroine reclaim their rightful position among gaming's greats.

© 1998-2021 HonestGamers
None of the material contained within this site may be reproduced in any conceivable fashion without permission from the author(s) of said material. This site is not sponsored or endorsed by Nintendo, Sega, Sony, Microsoft, or any other such party. Rise of the Tomb Raider is a registered trademark of its copyright holder. This site makes no claim to Rise of the Tomb Raider, its characters, screenshots, artwork, music, or any intellectual property contained within. Opinions expressed on this site do not necessarily represent the opinion of site staff or sponsors. Staff and freelance reviews are typically written based on time spent with a retail review copy or review key for the game that is provided by its publisher.