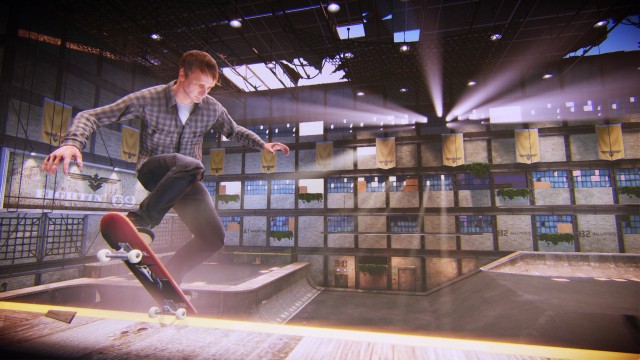 I'm gonna try to keep this brief because, unlike Activision, I'm not in the interest of wasting anyone's time.

To be totally fair, I never really had high expectations for a new Tony Hawk's Pro Skater game, because Neversoft pretty much perfected the formula by the second entry (a decade and a half ago), after which the only way forward was to either rehash the same routine or devise go-nowhere gimmicks like an expensive skateboard peripheral that nobody except Mr. Hawk himself seemed to even know how to use. But simply recycling the old experience would be preferable to what developer Robomodo has done here. Tony Hawk's Pro Skater 5 is ugly, lazy and broken, and its lack of original ideas makes it the worst kind of bad game: a cynical one.

Well, okay: It's got one new idea that I could identify, which is something called the "slam" maneuver, wherein an airborne skater can unceremoniously decide that Earth's gravity is suddenly several times stronger than it usual is. Slamming pulls a character to the ground at a high speed, and I cannot for the life of me figure out why this function was included or what benefit it's supposed to serve. It'd be fine if you could ignore it, but it's mapped to the grind button, meaning that players have to face a physics-defying reduction in airtime whenever they wish to grind.

So there you have it. THPS5's one notable new mechanic completes screws with the delicately balanced control scheme that Neversoft established several generations ago, as it adds an additional and frustrating complication when players should be focused on stringing together combos. The challenge in early Tony Hawk games was in mastering sensible controls; now it's in getting over needless hurdles.

I'll admit that I haven't been adamantly following the series in recent years, for the reasons I outlined above, so I don't know when exactly the Tony Hawk games completely lost their sense of urgency. But all of the levels in THPS5 are presented in free-skate mode, with time limits being saved for individual missions sprinkled throughout, and most of them bafflingly unconcerned with testing players' skill, instead focusing on inane reflex challenges and item collection. When the game's actually about skating, it's often weirdly cheesable. When your objective is to total such-and-such amount of airtime within a fixed limit, just find two quarter pipes facing one another and seesaw away.

None of this would make THPS5 a truly wretched product if the game wasn't running on a borked physics engine. It's bad enough that the slam maneuver throws off the series' famously fine-tuned balance, but there are countless other untraceable factors constantly getting in the way of providing players precise control. Movement is sporadically unresponsive and skaters frequently don't react in realistic, predictable ways to the environment. I've hit numerous invisible walls, I've barreled through the air apropos of nothing, and I've clipped to hell. It's the sort of mess you'd have expected to see back when 3D games were first introduced and programmers were still figuring out the basics, the irony being that the series really does hail from that era and somehow the earliest entries were a hell of a lot more stable than this.

Level design is lazy and slapdash all around, full of illogical placements and just generally lacking any flow or "lines." The game's tutorial stresses the need to use manuals to string combos together, and I can kind of see why, because there's often no natural way of linking moves together with the unfocused manner in which obstacles are laid out. I'll add that THPS5 is embarrassingly hideous for a current-gen, full price release, a fact that Robomodo half-heartedly tries to cover up with a pseudo-cel-shaded visual style that only makes the game feel even more out of date.

The ultimate test of such an intensely iterative franchise as Tony Hawk's Pro Skater is whether I can recommend a newer entry when held side-by-side with an older one. I played the hell out of THPS2 back in the day, but I promise that it's not just nostalgia talking when I say that, in a direct comparison, it's still undeniably superior to the most recent release, launched a whole 15 years later. That should be humiliating to Activision, but THPS5 is so obviously a hollow cash-grab that I doubt pleasing longtime fans was even a priority. An unpleasant chore, THPS5's only accomplishment is that it dethrones Godzilla as the most insulting $60 release of the year.

If you enjoyed this Tony Hawk's Pro Skater 5 review, you're encouraged to discuss it with the author and with other members of the site's community. If you don't already have an HonestGamers account, you can sign up for one in a snap. Thank you for reading!

© 1998-2021 HonestGamers
None of the material contained within this site may be reproduced in any conceivable fashion without permission from the author(s) of said material. This site is not sponsored or endorsed by Nintendo, Sega, Sony, Microsoft, or any other such party. Tony Hawk's Pro Skater 5 is a registered trademark of its copyright holder. This site makes no claim to Tony Hawk's Pro Skater 5, its characters, screenshots, artwork, music, or any intellectual property contained within. Opinions expressed on this site do not necessarily represent the opinion of site staff or sponsors. Staff and freelance reviews are typically written based on time spent with a retail review copy or review key for the game that is provided by its publisher.