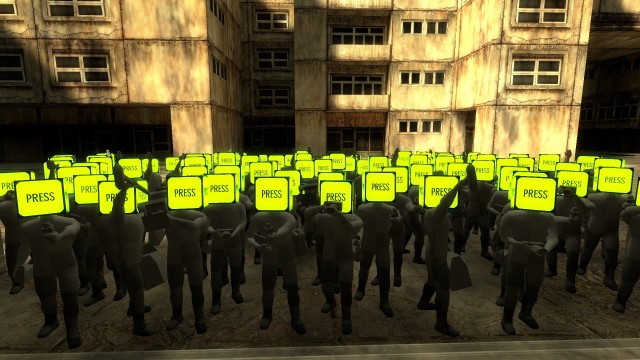 I imagine that the first person to mumble the words "walking simulator" didn't mean it as a term of endearment. While some developers wear the badge proudly, "walking simulator" is something of a slur in these parts, designating story-focused games that would rather not directly involve us in their narratives. Davey Wreden's The Beginner's Guide fits the basic criteria, as it puts no challenges or obstacles between us and a story that has nothing to do with us. But to dismiss the game's storytelling as lazy would be to undermine one of the most creative narrative experiments that the medium has seen in ages. The points that Wreden makes in The Beginner's Guide aren't new, but I don't believe anyone has ever made them in quite this manner.

The idea is that Wreden, following the success of his popular The Stanley Parable, has obtained a collection of unfinished, unreleased video games all developed by a reclusive friend of his named "Coda." The Beginner's Guide walks us in chronological order through all of these projects, all of which are short, and many of which are indecipherable, at least without knowledge of how their creator thinks. That's what Wreden is here for. He provides extensive commentary, relating each game to whatever real-life crises Coda was going through at the time. The self-stated goal is to draw a portrait of this mysterious developer and possibly reignite interest in his work.

This, in and of itself, is intriguing to me, as I'm the kind of person who listens to DVD commentaries. It's interesting to get a glimpse of a creator's process, even if it's just being echoed through a separate creator who is, himself, trying to make sense of what he's looking at. I'm reminded of those scenes in Grizzly Man when Werner Herzog used his extensive experience as a documentarian to decipher the meaning behind some of the more ambiguous footage that Timothy Treadwell left behind. We don't get that sort of insider's perspective very often in video games. I know countless critics, but it's rare to see this level of criticism and analysis from someone who's actually been on the creative side of the equation.

The "games" themselves toy with half-formed ideas and would never actually hold any commercial value, but you can tell from Wreden's warm, energetic tone that he enjoys dissecting Coda's work, noting recurring motifs and drawing parallels between Coda's development frustrations and his real-life hurdles. Taking on the responsibilities of a tour guide, Wreden even recodes certain segments to expedite our own play session, such as a "puzzle" in which players were intended to sit and wait in a prison cell for a full hour before being allowed to progress. Wreden and Coda disagreed on accessibility, you see. Wreden wants games to be played and enjoyed by everyone, while Coda believes that art can be as important to the creator as it is to any potential audience.

You may have guessed that there is more to The Beginner's Guide than what I'm telling you. Wreden wouldn't be getting nearly the attention he currently is for simply putting an anthology of someone else's work on Steam with an audio track of his own analysis playing over top of it. This is, naturally, where I leave you to discover Wreden's true intent for yourself, but know that an artistic statement is being made here, and whatever gimmick The Beginner's Guide is being framed with, this is Wreden's project.

So is it real? I'm not going to tell you. I'm not even going to say whether or not the game itself answers that definitively. It doesn't matter. Despite purporting to merely be a showcase of someone else's lost work, there is a story being told here, and the power of that story's message is the same whether it's real or a fabrication. The Beginner's Guide is about the relationship between Wreden and Coda, told on an unbalanced scale; Wreden is the raconteur, while Coda is only glimpsed through his work.

The Beginner's Guide is potentially "about" many things, from game design to fandom to depression, but it's ultimately about the human condition, about identity, our struggle to relate to people we don't entirely understand, and the common mistake of believing that everyone else thinks exactly like we do. Wreden's commentary is so confident that it never occurred to me that he's missing things or that there are elements at play that he's not telling us about. When the game ends  beautifully returning to a theme that had been established without me realizing it  the question shouldn't be whether or not this is real. The question should be whether Wreden is doing this for Coda or himself.

And that's all I will say about The Beginner's Guide, at least until penning the inevitable spoiler piece that nearly critic who plays the game will be frothing to write. It always feels like a cop-out to recommend a game without delving into much detail about it for the sake of keeping the experience "fresh" for readers, but yes, you should absolutely play The Beginner's Guide and you'll just have to take my word for it. It's truckloads of pretentious, and I can't guarantee that you'll enjoy it. But I can guarantee that you've never seen anything quite like it.

If you enjoyed this The Beginner's Guide review, you're encouraged to discuss it with the author and with other members of the site's community. If you don't already have an HonestGamers account, you can sign up for one in a snap. Thank you for reading!

© 1998 - 2022 HonestGamers
None of the material contained within this site may be reproduced in any conceivable fashion without permission from the author(s) of said material. This site is not sponsored or endorsed by Nintendo, Sega, Sony, Microsoft, or any other such party. The Beginner's Guide is a registered trademark of its copyright holder. This site makes no claim to The Beginner's Guide, its characters, screenshots, artwork, music, or any intellectual property contained within. Opinions expressed on this site do not necessarily represent the opinion of site staff or sponsors. Staff and freelance reviews are typically written based on time spent with a retail review copy or review key for the game that is provided by its publisher.