Gunman Clive is a 3DS indie success story. It's a small, humble platformer built by a single developer that's solid enough to earn a spot in the library of many a 3DS owner. Now, this bite-sized adventure (joined by its sequel) has made the jump to HD on the Wii U. 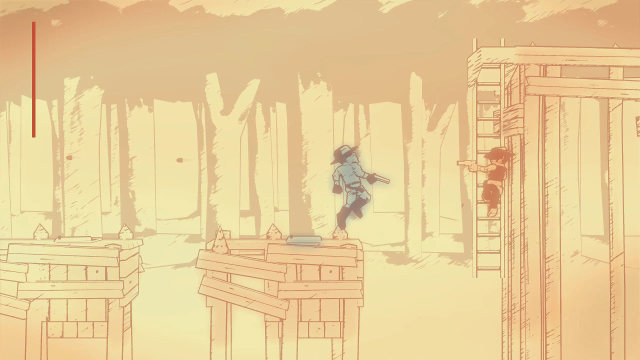 Both games included in this collection are accessible from the title screen, but they're best experienced in the proper order. The central run-and-gun gameplay feels similar to that of Mega Man, but without the crazy weapons and robot dog. (Alternate weapons are also available as power-ups, but they mostly drop randomly and they disappear once you take damage.) Gameplay is simple, with tight and responsive controls. Several alternate playable characters can keep subsequent runs from feeling stale, as well. In this HD version, the first Gunman Clive now includes the melee-focused Chieftain Bob character, which formerly was exclusive to the sequel.

Bob is the one new non-cosmetic feature in this collection. Otherwise, it's basically a simple up-port to Wii U. Everything runs at a 1080p HD with anti-aliasing applied, and it looks great. The game's art style, which resembles line art and watercolours, upscales well. Gunman Clive is a great example of the kind of presentation that's possible with a low budget and enough creativity and skill. The art is complemented by the catchy western-style soundtrack, which is reminiscent of old western movies. 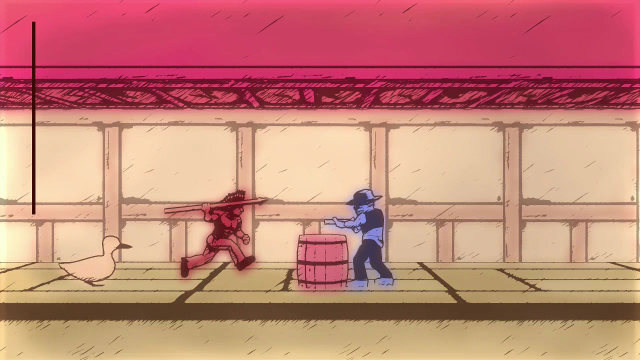 No matter how solid they are, though, simple mechanics require varied level design to keep gameplay fresh. Fortunately, both Clive adventures pull it off. The first game is a bit simpler, with a mostly Wild West setting. Level gimmicks range from typical mine cart rides to bizarre, Mega Man 5-style gravity fields. Gunman Clive 2 expands the scope, becoming a world tour that involves a variety of mounts and vehicles. This keeps it from offering only more of the same, though the vehicle stages don't quite live up to the simple fun of the core running and gunning.

It's clear from their length that Gunman Clive levels were designed for handheld hardware. Most stages can be cleared in a minute or less, making them good for speed runs. The games themselves are built on a small scale, as well. Both of them together can be cleared in less than a couple of hours. There's room for small games that don't overstay their welcome, especially on the eShop, and especially when they're priced at $4.00 like Gunman Clive HD Collection. 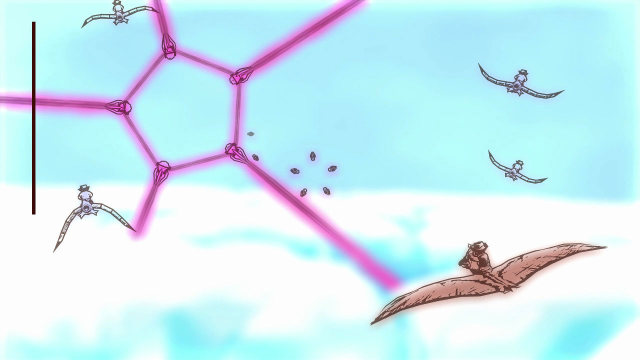 Gunman Clive HD Collection looks and sounds great, but it doesn't bring much new to the table for fans of the 3DS versions of the games. Chieftain Bob in the first Gunman Clive is a nice bonus, but not exactly a major selling point. Still, these games are just as good now as they were the first time around. New players should give the HD Collection a try, while returning fans should enjoy the games just as much in glorious HD as they did in humble 240p on 3DS, provided they keep their expectations for new content in check.

If you enjoyed this Gunman Clive HD Collection review, you're encouraged to discuss it with the author and with other members of the site's community. If you don't already have an HonestGamers account, you can sign up for one in a snap. Thank you for reading!

© 1998 - 2022 HonestGamers
None of the material contained within this site may be reproduced in any conceivable fashion without permission from the author(s) of said material. This site is not sponsored or endorsed by Nintendo, Sega, Sony, Microsoft, or any other such party. Gunman Clive HD Collection is a registered trademark of its copyright holder. This site makes no claim to Gunman Clive HD Collection, its characters, screenshots, artwork, music, or any intellectual property contained within. Opinions expressed on this site do not necessarily represent the opinion of site staff or sponsors. Staff and freelance reviews are typically written based on time spent with a retail review copy or review key for the game that is provided by its publisher.