The kinder, gentler, progress-saving PS4 version of punishing Steam favourite Velocibox looks to maintain its hardcore twitch king campaign, despite the fact that this iteration is much more accessible (a bad word, I think), and despite the fact that the game has always been more about next level pattern memorization and the ridiculous levels of patience required to achieve same, than anything else.

It's not that you don't need crazy reflexes to succeed - let me be clear. In navigating your cube through this first person infinite runner, you are expected to dodge oncoming obstacles by moving left and right and by flipping the screen, all at eye-watering speed. No, really. Velocibox is too fast for you. But heres the thing: the slick finger river dance doesn't really take centre stage until you've thrown dozens and dozens of lives at learning the flight patterns first. That the patterns per level are randomized to a degree only means more memorization is required than were the levels static. 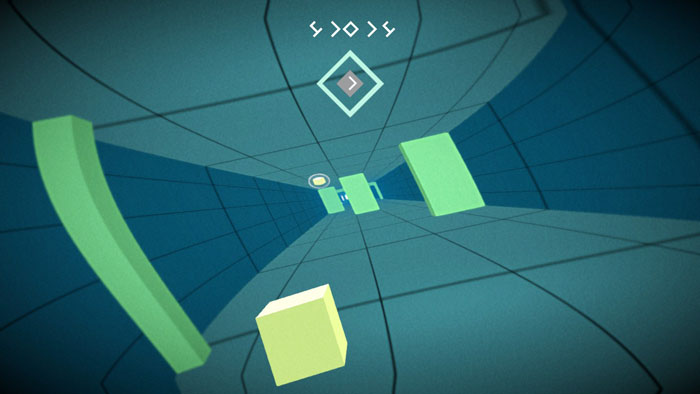 You'll die and restart hundreds of times to make unimpressive inroads; the main skill being tested here is how quickly and completely you can recognize the different waves of obstacles and only then, as a secondary focus, does it matter how nimble your fingers are. This distinction is notable because the game's website and its legion of diehard fans would have us believe that this Velocibox is the ultimate test of reflexes, not patience.

I'm led to think of Super Hexagon, perhaps the spiritual predecessor to this game, which is also extremely tough, but which, when you're going well at it, demands that you be in the zone and at your purely reactive best; at no point do you find yourself frantically recalling a path emblazoned on your minds eye, earned through attrition. Instead, walls close in, and you maneuver this way or that - juking on instinct - simply to survive. 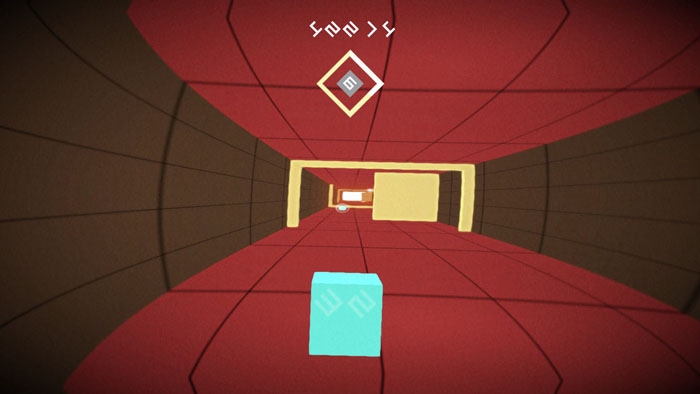 And maybe that's part of it. Velocibox has a lot more going on. Left, right, flip the screen and then find your new left and right under crushing pressure, all while collecting minicubes towards the six that are required to progress to the next level. Thats right  survival isnt good enough. It's too much, too fast, and that's why your only hope is to learn, remember, and follow through. Flying by the seat of your pants is what twitch gaming is all about, what this game purports to be all about, and it simply can't be realistically managed.

I can't imagine playing the original, the way the game was meant to be played. Finally making it to level three, say, only to die and retry from the beginning. It would seem to me that the much higher stakes that starting from scratch with each death creates only puts more pressure on you to get it right. I'm certainly glad for the decision to allow restarting from any level you've already reached, patronizing though it might be. I'm sure the thinking was that today's console gamers have crap skills, and I'm fine with that - I wouldn't have played the Steam version for even half the time. I have nothing against obnoxious restarts in principle - see again, Super Hexagon - but I don't love them when so much else is obnoxious. 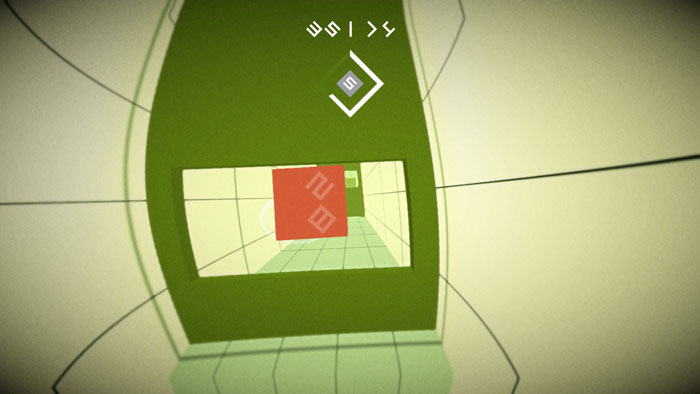 Ironically, in making things less difficult for us PS4 players, and forgoing the need to start over with each failed attempt, Velocibox also reveals how small it is - cell phone game small. Nine levels (I presume), and then another 'Super Velocibox' set of even more challenging levels after that (Ive heard). That's not a lot of levels. Consider also that each stage can probably be beaten in less than 90 seconds. Longevity then, is built on the back of deaths; replayability on the back of pigheadedness.

If, after all my hand-wringing, Velocibox sounds like it's for you, you're probably a masochist, or someone who craves an outrageous challenge by which to hoist high scores in unbelieving friends' faces. If thats you, then have at it. As the game's website rightly puts it, "you've been warned."

© 1998-2021 HonestGamers
None of the material contained within this site may be reproduced in any conceivable fashion without permission from the author(s) of said material. This site is not sponsored or endorsed by Nintendo, Sega, Sony, Microsoft, or any other such party. Velocibox is a registered trademark of its copyright holder. This site makes no claim to Velocibox, its characters, screenshots, artwork, music, or any intellectual property contained within. Opinions expressed on this site do not necessarily represent the opinion of site staff or sponsors. Staff and freelance reviews are typically written based on time spent with a retail review copy or review key for the game that is provided by its publisher.