So much more could have been done with Submerged. Calling the failing here tragic barely qualifies as hyperbole. It has so many things going for it at first glance: a female protagonist. A minimalist approach and aesthetic reminiscent of cult hit Ico. A unique (as games go) kinship between a doting big sister and her wounded little brother. A devastated, half-submerged city begging to be explored. I can see the development team back-patting in the boardroom as they took stock of the uncommon glut of riches they packed with the premise.

It couldnt have been too long after that meeting that they decided to stop working on the game.

The cliché goes that the game is a story of squandered promise. It was with some sadness that I racked my brain and concluded that I dont know of many examples of that trope more extreme than Submerged. 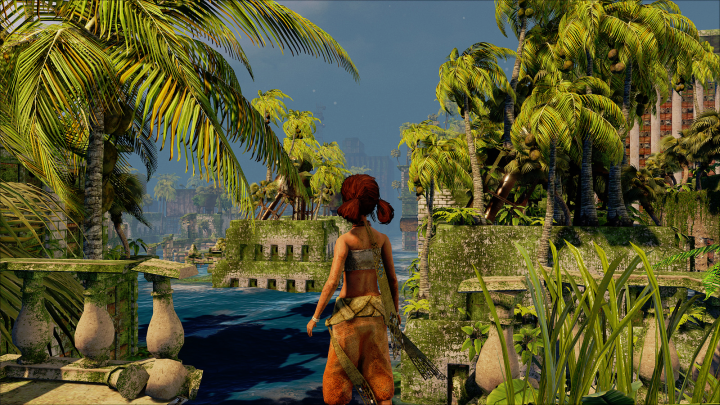 The good part first, then (I promise youll be able to tell when it goes bad): You are Miku. Your brother Taku has a wound to his abdomen that has left him in a catatonic state. After sailing untold miles to seek shelter, you find it in the form of a reasonably safe haven - a building with a bench of sorts that he can rest on - and then it's off to find him various supplies to assist in his recovery.

Off you go, aboard your little boat. You'll use your telescope to magically locate the helpful items you are seeking, hidden away in red crates, usually on the top floor of some random building. You'll steer out to said building, dock, and start climbing.

You can climb up what look to be moss formations, pipes, and ledges - both broken and whole - all by simply pressing up on the analog stick. Youll reach the crate when you reach the top, crack it open and find water, food or medicine, and a cut scene will whisk you back to your home base, where you administer aid, take a nap at the foot of your little brother's bed, and when you wake up, you will do the exact same thing again.

The entirety of the game is ten such fetch quests. 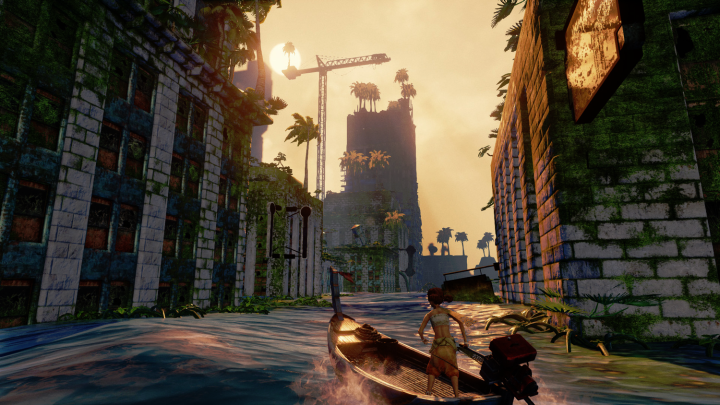 There's nothing more to it. You can't swim underwater. If you read the previews, youd have known already that there's no combat. There are no NPCs to speak of (your fitfully sleeping charge doesnt count). I get that the game is supposed to be about solitary exploration, and the depth of your relationship. But the same-looking broken buildings offer precious little to see, and aside from the initial 'aww' factor that seeing big sis care for little bro elicits the first time, nothing plays out that might be mistaken for being poignant, or for approaching permanence.

When you reach the end, in only a few hours of play time, you'll wonder what the point was. The collectibles (upgrades to your boat and drawings that reveal your personal plight along with the greater downfall of civilization) can be considered further fetch quests which are rendered wholly unnecessary by the facts that you don't need a faster boat than the one youve got (to escape from what?), and the drawings you come across without trying are sufficient visual cues to tell us what's been going on.

Once again, its sad really, because it seemed as if there might be quite a bit going on with Submerged from a distance. Didnt the screenshots of climbing sequences remind us of the dynamic platforming of Uncharted? Would we uncover horrible - but compelling - vestiges of whatever cataclysmic event wrought this place, a la Bioshock? There really did seem to be quite a buzz about this game based on previews, based on what little we knew of it. Sadly, like a bad Hollywood comedy, the previews are the best of, and limits of, what is on offer.

If you enjoyed this Submerged review, you're encouraged to discuss it with the author and with other members of the site's community. If you don't already have an HonestGamers account, you can sign up for one in a snap. Thank you for reading!

© 1998 - 2023 HonestGamers
None of the material contained within this site may be reproduced in any conceivable fashion without permission from the author(s) of said material. This site is not sponsored or endorsed by Nintendo, Sega, Sony, Microsoft, or any other such party. Submerged is a registered trademark of its copyright holder. This site makes no claim to Submerged, its characters, screenshots, artwork, music, or any intellectual property contained within. Opinions expressed on this site do not necessarily represent the opinion of site staff or sponsors. Staff and freelance reviews are typically written based on time spent with a retail review copy or review key for the game that is provided by its publisher.