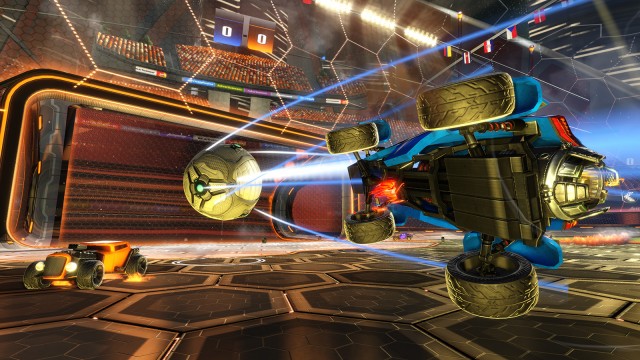 I don't like soccer. I never watch it or pay attention to it. I've never played FIFA. Whenever the World Cup is happening, I have to ask people on Twitter what they keep banging on about. Hell, I was on a soccer team in first grade and I was awful at it. I consider it one of my earliest self-esteem casualties. Many more would follow. I hate soccer. So why is Rocket League the best, purest fun I've had playing a game this year? What's up with that?

The answer is that Rocket League really isn't a soccer game. It's a competitive, driving-based physics-'em-up that, sure, I guess shares its most basic rules with soccer. Yes, it involves two teams trying to knock a ball into goals on opposite ends of a field, and that description also applies to soccer, but see, it's all being done with RC cars, and that's different. No, really. Because now when my teammate sends me a pass at a 60-degree angle away from the enemy goal, I can see it and everything and I know what you want me to do, but I was going in a different direction when you hit that and now the ball's coming at me from the side, and I can't hit it in the direction I want to without stopping and doing a three-point turn, because this thing doesn't move sideways, you dig?

Developer Psyonix has taken an activity that I don't like (soccer) and made it approachable using an activity that is the basis for many games that I adore (driving). It's not the first time that they've done it, either, but their first soccer-driving game was called Supersonic Acrobatic Super-Power Battle-Cars, so I can see why it never caught on. I never played that, so if shaving twelve syllables from the title is Rocket League's only contribution, for shame. 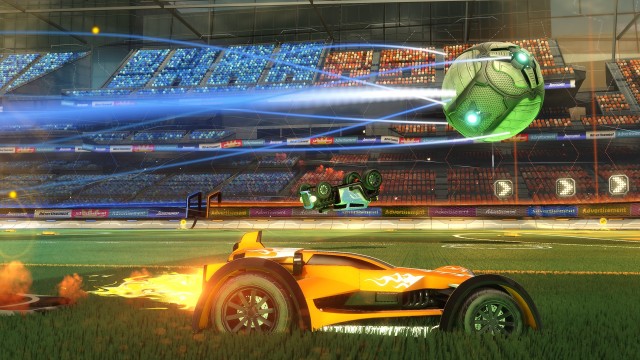 I doubt it, though. Rocket League feels too fine-tuned for that, like the product of designers, programmers and artists who have been here before and had the chance to test their ideas in the real world and recalibrate as necessary. This thing needs to be tight as a gasket, right? It's a game entirely reliant on where the ball would go if I hit it from this direction while it's going that way at that speed. In the couple dozen hours I've spent with Rocket League, I experienced not one instance of the game's physics engine not functioning the way it should. For once, those slow-motion replays serve a practical purpose, allowing you to re-examine the last play and confirm that, yes, a passing opponent really did top your save in such a manner as to send it spiraling back into the goal.

That degree of predictability means that it's possible to develop genuine skill in a competitive landscape that at first feels frenetic and random. During your first several matches, you're worrying too much about controlling yourself to possibly have any say over where the ball is going, and any successes feel accidental. But Rocket League is confident enough in the pull of its central idea that it abstains from filling itself with excess, which would distract us from building a full understanding of how the game works. Despite visual differences, all of the maps are laid out identically, which means that after a fair amount of time on the field, you can reliably predict that if the ball is going in such-and-such direction at yada-yada height, it'll be at this spot a second or two from now. Having to control a vehicle is a major limitation to movement, but you can work around it by knowing where to be. 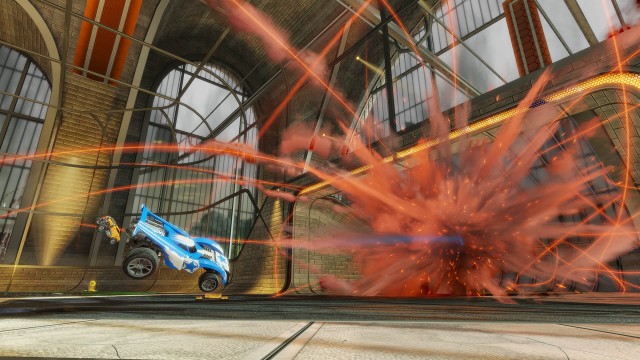 As I suggested when I noted that the game is free of clutter, Rocket League is perhaps most impressive for what it doesn't do. There's no tacked-on narrative, no obnoxious announcer spewing one-liners, no coach characters whipping you into shape, and very little attempt at "personality" beyond some unlockable ornaments that you can adorn your vehicle with. There are no items or power-ups (aside from a boost ability) and no major variations in rules. The only real change from one match to the next is the number of players per team. That's either bold or stubborn depending on the quality of the game, and Rocket League avoids feeling like a skimpy package for perfecting its own niche. Rather than being a game that does many things adequately, it's a game that does one thing superbly.

I now fancy myself a pretty damn good Rocket League player, enough so that I regret not saving replays and subsequently being able to relive those brilliant moments when I landed an aerial hit after banking off a wall, or miraculously turned a close save into a cross-field goal, or forced my opponent in a 1v1 match to rage quit after scoring on the opening serve. I doubt such footage would be of interest to anyone else, though, because anyone who dumps enough time into Rocket League will likely experience such feats for themselves. The game is a casserole of beautifully-coordinated triumphs, accidental victories and heartbreaking miscommunications, all presented in the frame of a digestible, easily-understood e-sport that always behaves the way it's supposed to. If you think it's not for you, you're probably just as wrong as I was.

If you enjoyed this Rocket League review, you're encouraged to discuss it with the author and with other members of the site's community. If you don't already have an HonestGamers account, you can sign up for one in a snap. Thank you for reading!

© 1998-2022 HonestGamers
None of the material contained within this site may be reproduced in any conceivable fashion without permission from the author(s) of said material. This site is not sponsored or endorsed by Nintendo, Sega, Sony, Microsoft, or any other such party. Rocket League is a registered trademark of its copyright holder. This site makes no claim to Rocket League, its characters, screenshots, artwork, music, or any intellectual property contained within. Opinions expressed on this site do not necessarily represent the opinion of site staff or sponsors. Staff and freelance reviews are typically written based on time spent with a retail review copy or review key for the game that is provided by its publisher.