Like the previous two Re;Birth games before it, Re;Birth 3 is a remake. This one is based on Hyperdimension Neptunia Victory. The third game in the franchise introduced time traveling antics, as well as jokes at the expense of mobile games, PC software, and even the franchises most beloved character. With Re;Birth 3, all of that is back and then some. The developers have taken everything that was great about Victory and jettisoned everything that was terrible.

Hyperdimension Neptunia Re;Birth 3: V Generation begins as Neptune is sent to another dimension by a group dedicated to wiping the CPUs from existence. She ends up in the late 80s, where Lowee is the only established nation and Planeptune has just been founded by Plutia. From there, the story goes on to lampoon the early days of the game industry, including the birth of PlayStation and the rise of the PC and mobile as gaming platforms. 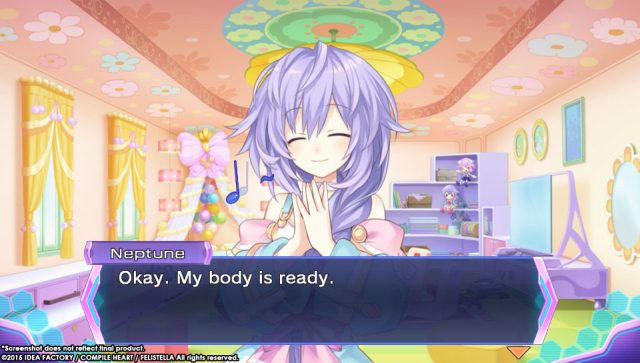 Not much has changed from the game's original PlayStation 3 version, but Re;Birth 3 does add a few extra story sequences to spoof recent industry developments. In particular, one humorous early scene has Nepgear outfitting Neptune with the Nepulus Grift to explore a virtual world. Additionally, the game is peppered with numerous extra sequences that have the various cameo characters interacting with the CPUs. Victory was a little light on these interactions, so its lovely to see characters like CyberConnect 2, Falcom and MAGES get more time in the spotlight.

The battle system hasnt changed much from the recent iteration seen in Re;Birth 2. Four characters take the field at once in turn-based skirmishes that rely on combos made up of light, heavy and guard break attacks. The difference this time is that each character can now chain together five combo hits instead of four, after acquiring the necessary item. Its not a major change, but it does add some extra depth to a system that has only grown in complexity since its introduction in Mk2, all the way back in 2012. 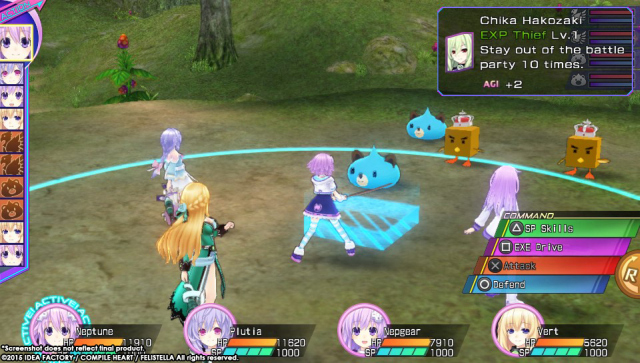 The Remake system introduced in the first Re;Birth also is improved. It was originally introduced as a way to supplant the terrible scout system introduced in Victory that forced players to send scouts to dungeons to uncover treasure, secret bosses and flags that changed drops. In the past two Re;Birth games, the lingering ghost of the Scout system hung heavy over the game, with plans that changed item drops and bosses. In Re;Birth 3, the Remake system has been simplified by combining the two into a single plan that changes the item drops and enemies in a dungeon. Its an appreciated fix that makes farming for items much easier.

Victory also introduced an end-of-chapter report that scored players on how many quests they completed, how many monsters they killed, how many shares they gathered, and how many scouts they sent out. The entire report is now gone, and good riddance! Some people may have liked being berated by the games staff for not completing enough side quests, but I always felt it went a little too far in its attempts to make me feel bad for not bothering with the games terrible side quests. As an aside, Walletcrusher Nep and the Millionep Quiz are both back, so those who might worry whether theyll be able to crush that wallet can rest easy. 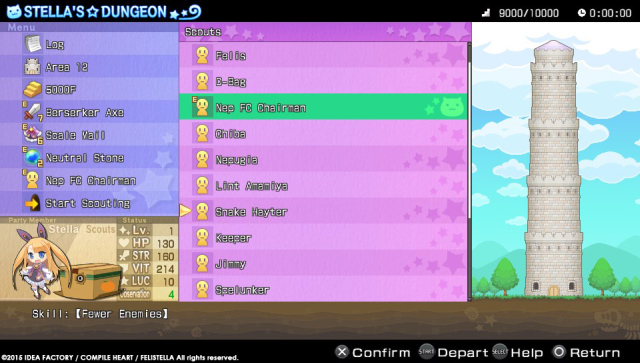 My favorite addition in Re;Birth 2 was Stellas Dungeon, a rogue-like mini-game that let players send Stella into randomly generated dungeons to fight enemies, gather loot and discover secrets. Stellas back for Re;Birth 3, and with some major improvements. In her original incarnation, Stella could scout discovered dungeons, but here she instead explores a centralized tower. Players set her to climbing, and each area she conquers unlocks the next one. There are literally thousands of floors to ascend, so players hoping to reach the top will have their work cut out for them. Failure results in Stella losing her equipped items and scouts, ensuring theres plenty to look out for along the way.

As I played through Re;Birth 3 this past week, I found myself regarding the franchise the way a person might look at annualized sports games. Its hard to judge the Neptunia games the same way one would other JRPGs, after all. They arent the results of years of hard work in the same way that their peers are. Instead, rather like a sports game player, I look forward to each new entry for the small changes and roster additions that can make something familiar even better.

Neptunia games by now feel as certain as death and taxes. Vita owners are blessed, then, that Compile Hearts flagship JRPG franchise continues to serve as a mostly pleasant alternative to the more serious fare that dominates the industry

If you enjoyed this Hyperdimension Neptunia Re;Birth3: V Generation review, you're encouraged to discuss it with the author and with other members of the site's community. If you don't already have an HonestGamers account, you can sign up for one in a snap. Thank you for reading!

© 1998-2021 HonestGamers
None of the material contained within this site may be reproduced in any conceivable fashion without permission from the author(s) of said material. This site is not sponsored or endorsed by Nintendo, Sega, Sony, Microsoft, or any other such party. Hyperdimension Neptunia Re;Birth3: V Generation is a registered trademark of its copyright holder. This site makes no claim to Hyperdimension Neptunia Re;Birth3: V Generation, its characters, screenshots, artwork, music, or any intellectual property contained within. Opinions expressed on this site do not necessarily represent the opinion of site staff or sponsors. Staff and freelance reviews are typically written based on time spent with a retail review copy or review key for the game that is provided by its publisher.