I have a confession to make. Im not proud of it, but Fallout Shelter has lured me into making in-app purchases. It was just too tempting. Everything was ticking along nicely; my vault was growing slowly but everyone was happy, rooms were being carefully added to the underground complex in a very deliberate manner, resources were being collected regularly, caps were increasing and well, to be honest, it all got a little tiny bit routine. So I bought a lunchbox. Just one, though. I opened its contents in the lunchbox opening screen, a menu designed to deliver maximum anticipation as you watch the lid slowly lift to reveal four trading cards that are converted into in-game rewards. The first card: 50 caps. OK, not bad. The second card: 50 food. Useful, although my diner was operating at maximum efficiency. The third card: more caps. 100 this time, but still a little disappointing. The fourth card: Lincolns Repeater. YES!! A high status rifle that deals a whole lot of damage. I equipped my strongest vault dweller with the weapon and promptly sent him out into the wasteland to kill some rad scorpions. Then I bought four more lunchboxes.

Fallout Shelter is a free-to-play game with in-app purchases, but it would be unfair to suggest that you NEED to spend money to make progress. As far as base-building games go, you can achieve success pretty quickly without spending a penny. You start with nothing, of course. As the overseer of a vault youre instructed to build a few basic rooms (lounge, power generator, water supply) before inviting a couple of wandering humans inside to begin your great social experiment. Before long youll have collected resources from your production rooms and more drifters will have appeared at the door of the vault. More people leads to greater production which leads, in turn, to more money. With a growing population and a stockpile of cash you can start expanding and upgrading rooms. Soon youll be tripling the size of your lounge, destroying rocks in the earth and inserting elevators to expand your complex further underground. Eventually youll be collecting from dozens of production rooms and contemplating a nuclear reactor to keep all of your vault dwellers above 80% happiness. Youll have even bought a few lunchboxes. 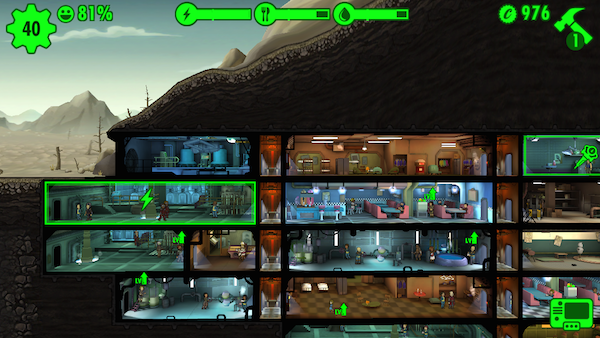 If youve played an iOS base-building game then all of this will be very familiar, right down to the notifications that pop up to prompt you when something needs doing or collecting. Its addictive to build a community and the challenge of keeping the population happy, managing resources and dealing with any unforeseen incidents is always compelling. Ive found it quite easy with my first vault, although perhaps thats because Ive played it pretty safe and havent expanded too quickly. The supply of power, water and food is shown on screen at all times so you can easily see when youre running low. The gauges also allow you to tell if you need to build more production rooms to keep up with a growing population. If youre running perilously low on resources you can always rush production although this involes a roll of the dice and may end up in a fire or rad-roach infestation.

Its the Fallout theme that will keep most interested and Bethesda have clearly put plenty of effort into making this an engaging experience for the fans. Vault dwellers are modelled on Vault-Boy and you can zoom right into a room to see them hard at work. Theyll give you a comment too. Sometimes theyll tell you how happy they are. Other times theyll hit you with corny humour or a knowing reference to the series. My favourite so far was when a scientist revealed that he was writing a new song, praising the overseer. He needed a word that rhymed with great. The other person in the room suggested Vertebrate? Stablemate? Encapsulate? Or maybe just ate? You can customise people in your vault by equpping them with clothes and weapons that youve collected. Their stats differ, so a degree of thought is involved in deciding where to place them and what clothes to dress them in. Once you unlock training rooms you can raise certain stats. Build a weight training room and you can produce a citizen with super strength who can be equipped with power armour and a laser rifle and sent out into the wasteland. Their exploits will be reported to you in the form of a running narrative and he or she will collect caps, weapons and clothes (providing they arent killed by a Death Claw). 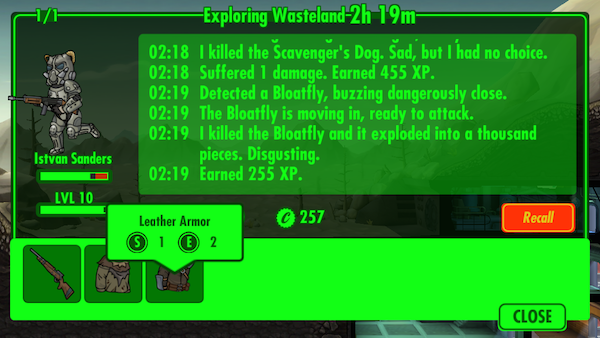 For the first couple of days Fallout Shelter will definitely hold your interest as you build your vault and enjoy all the little immersive touches from the Fallout series. A week on and my interest has begun to wane, though. The chance of acquiring rare weapons and clothes from exploration of the wasteland seems pretty slim. Ive given up checking on one poor radiation-posioned soul who has been out there for days. Hes collected a few things, but nothing special. Back in the vault Im collecting power, water, food and steadily accruing caps as usual, but theres only so many times you can build a diner before it all gets repetitive. My population continues to expand, but no one turns up at the door anymore. Population growth has been achieved by a somewhat unethical accelerated childbirth programme. Ive put Dennis Harvey in the lounge because he has a high charisma and isnt much use at anything else. Every day I send a female dweller down to the lounge and, after a little flirting and dancing, they run off to the bedroom. She ends up pregnant, a while later a baby is born and a few days later I have another adult dweller in my vault! Dennis Harvey has 100% happiness, although I might have to remove him from the lounge soon. There are now a lot of Harveys in the vault, and he rightly refuses to have sex with his daughters. 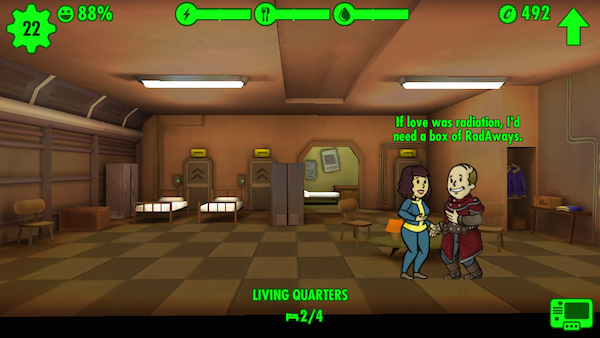 Reduced to collecting resources and maintaining a healthy birth rate, life as a vault overseer has become fairly monotonous. I went through a spell of buying lunchboxes, but even thats lost its appeal. I dont need extra caps or extra resources and special weapons and new high stat vault dwellers are nice, but fairly pointless. The only break in the routine now is when a party of three raiders bash the door down and storm the vault, but they always run to the same room, the medbay. Theres a scientist in here with a rusty turret gun who slaughters them all within seconds. Its true that the game has an objective system, which assigns specific tasks, but these only serve to further expose the shallow gameplay. Collect 200 food and get 75 caps. Great. Deliver 7 babies and get one lunchbox. This sounds exciting, but the items gained from free lunchboxes suspiciously never seem as good as the paid ones. 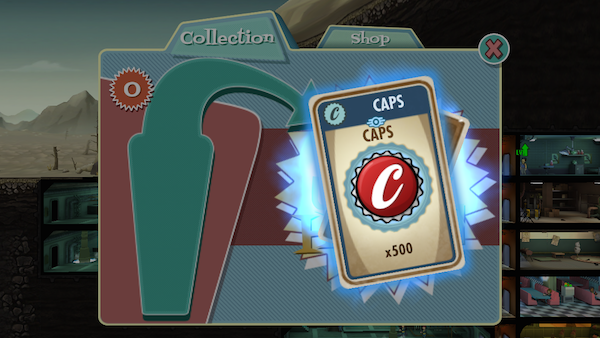 Fallout Shelter is fun for a little while but it suffers from a lack of variety and becomes rather limited after a couple days of success. There arent that many different types of room to construct and its therefore not that difficult to build a happy population with a balanced supply of resources. Youll rarely encounter any serious challenges if you build slowly and carefully in a sustainable manner. Although Bethesda should be applauded for not forcing you to pay to progress, the lunchboxes do highlight a major issue with the game. The only time Fallout Shelter really gets interesting is when you get a special card with a rare item or a high spec vault dweller but even this loses its appeal after a while. Fallout Shelter is an entertaining distraction for a couple of days and contains enough to keep Fallout fans on board for a little while longer, but after a week youll be looking for something with a little more depth, challenge and variety  like Tiny Tower.

If you enjoyed this Fallout Shelter review, you're encouraged to discuss it with the author and with other members of the site's community. If you don't already have an HonestGamers account, you can sign up for one in a snap. Thank you for reading!

© 1998-2021 HonestGamers
None of the material contained within this site may be reproduced in any conceivable fashion without permission from the author(s) of said material. This site is not sponsored or endorsed by Nintendo, Sega, Sony, Microsoft, or any other such party. Fallout Shelter is a registered trademark of its copyright holder. This site makes no claim to Fallout Shelter, its characters, screenshots, artwork, music, or any intellectual property contained within. Opinions expressed on this site do not necessarily represent the opinion of site staff or sponsors. Staff and freelance reviews are typically written based on time spent with a retail review copy or review key for the game that is provided by its publisher.