Shovel Knight is a love letter to platforming's 8-bit glory days in the unconvincing-yet-appealing guise of an actual NES game.

Retro art styles for indie games are a dime a dozen at this point. Many of them look like they're running on the NES that exists only in the memories of 30-year-olds who haven't actually seen a NES game since the release of the SNES, and Shovel Knight is chief among them. That's ultimately for the better. Shovel Knight never lets a little thing like authenticity get in the way of vibrantly colourful environments and well-animated sprites. Games like this are why the Vita's OLED screen exists.

Much more authentic is the game's soundtrack, consisting entirely of chiptunes that would feel right at home in a Mega Man game. (In fact, a couple of the tracks were contributed by Manami Matsumae, who composed the soundtrack for the very first Mega Man.) It's suitably catchy, though it may grate on you after a while, depending on your individual tolerance for high-pitched beeps and bloops. 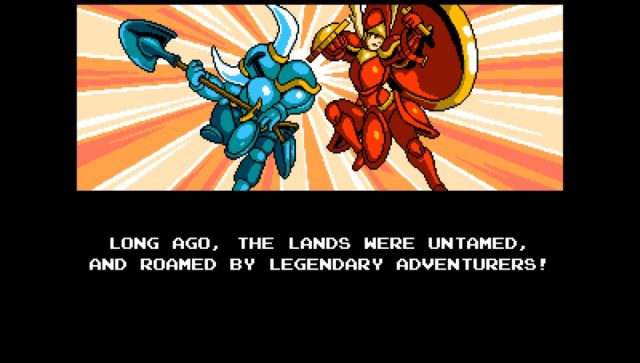 The game stars the titular Shovel Knight, who is at first, surprising nobody, armed only with a shovel. The tool essentially has two uses. Its most obvious use is as a straightforward weapon. Shovel Knight can swing his shovel like a sword, whacking foes to damage or defeat them. Hitting certain blocks will destroy them. Some walls contain secret paths or treasures that can be uncovered with a shovel attack.

The shovel's second, and more fun, use is as a pogo stick. While in the air, pressing down on the D-pad will cause your character to aim his shovel straight down. This can be used to bounce from certain obstacles and enemies. Bouncing from an enemy will damage it. Bouncing is a fun way to reach high treasures and platforms. There's nothing more satisfying than repeatedly bouncing off a boss' head to take him down. Shovel Knight has a simple moveset, but it feels good and is fun to use. Mechanically, Shovel Knight is as solid as it gets. 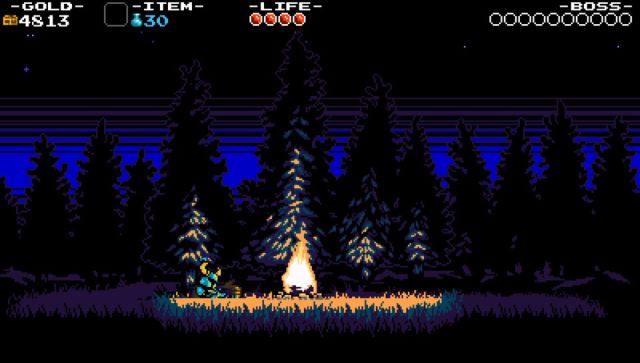 There are several ways to upgrade your repertoire of moves. Equippable relics will give you access to magic spells with a variety of effects. One spell shoots a fireball straight ahead, for example, while another allows you to dash through the air a set distance. Upgrades to your shovel will add extra effects, including shockwaves that travel along the ground when you swing your weapon. You can also buy alternate sets of armour that grant you different skills or attributes. One personal favourite will give you a powerful charged slash if you can manage to bounce from an enemy or obstacle twice in a row.

One special new armour is unlocked by defeating God of War's Kratos, who makes an appearance in the PSN version of the game. The Xbox One version gets the Battletoads. Expect an update to the 3DS and Wii U versions to add Kiddy Kong or whoever Nintendo's own worst character is these days. 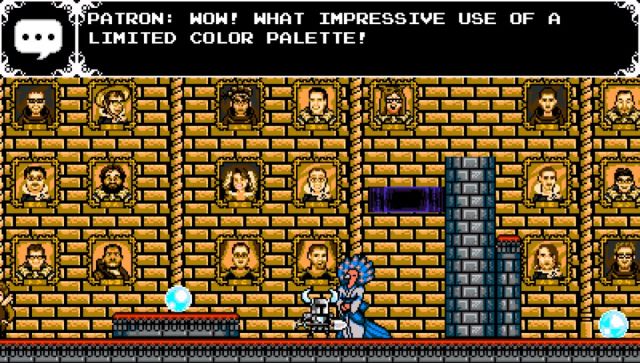 As tight as Shovel Knight is from a mechanical standpoint, its level design isn't quite as polished. The game includes a lot of the best, but also a few of the worst trappings of the platformer genre as it existed in the 80s. Levels are largely designed around the old instant death standbys of bottomless pits and spikes. The game is challenging, but mostly fair. Thankfully, the game lacks that one archaic holdover from arcade games, lives, but checkpoints aren't always generously placed, and dying causes you to drop a chunk of your gold. The gold can be collected from the spot where it was lost, Souls-style, but it will disappear if you die a second time before reaching it.

Levels feature a variety of gimmicks to make each individual stage stand out. Some are interesting and fun. Manoeuvring around an airship exterior by riding ever-changing wind currents requires a bit of thinking. Bouncing from cannon ball to cannon ball to make it across a chasm is an enjoyable test of skill. Meanwhile, I'll be happy if I never have to play another platforming segment full of enemies and traps that are only briefly visible when illuminated by lightning strikes. Also, apparently at least one person on Earth actually enjoyed getting knocked into pits by flying enemies that spawned in front of you in Ninja Gaiden, and that person now works at Yacht Club Games.

Shovel Knight nails its presentation and mechanics and mostly gets its level design right, too. I enjoyed my time with the game, and while I don't have much desire to play it again, it's certainly one of the better faux-NES games on the market. It's especially well-suited to the Vita, though it's worth playing on anything with two buttons and a directional pad. If you're in a retro mood, check it out.

© 1998-2021 HonestGamers
None of the material contained within this site may be reproduced in any conceivable fashion without permission from the author(s) of said material. This site is not sponsored or endorsed by Nintendo, Sega, Sony, Microsoft, or any other such party. Shovel Knight is a registered trademark of its copyright holder. This site makes no claim to Shovel Knight, its characters, screenshots, artwork, music, or any intellectual property contained within. Opinions expressed on this site do not necessarily represent the opinion of site staff or sponsors. Staff and freelance reviews are typically written based on time spent with a retail review copy or review key for the game that is provided by its publisher.