Looking back, 1985 was an amazing year for video games, producing titles that are either remembered fondly or still pumping out sequels with no end in sight; Super Mario Bros. is the most significant name on the list, and from there you have Sega's visionary Space Harrier, Konami's creative Gradius, and Atari's goofy Paperboy, to name a few. Each game, while a challenge in their own right, also commonly share the trait of being accessible from the start, allowing anyone to hop in without much confusion. Then there's The Legend of Kage. Also released in 1985, this side-scrolling action title about ninjas is filled with awkward controls that include floaty jumps, being able to shoot shurikens diagonally only when jumping, unable to avoid grabbing tree barks with every jump, and featuring unpredictable enemy patterns in a game with one-hit deaths. It only has four short stages, but the nightmare of dying in the most irritating and random ways make up for the brevity. Kage is just memorable for all the wrong reasons. 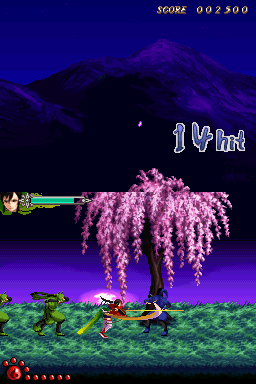 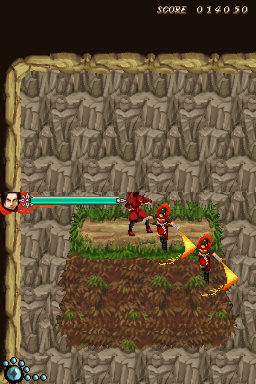 So it comes as no shock that it took more than 20 years for it to finally have a semblance of a successor with 2008's The Legend of Kage 2. Though, despite having a number two at the end of the title, this follow-up acts more like a reinterpretation of the original game, featuring a drawn-out plot in the form of text dialogue cutscenes, a larger assortment of stages and enemies, and a reworking of your protagonist's movements. Explaining that last one first, Kage now acts how a video game ninja should respond like: deadly and agile. For starters, the jump is actually assigned to a button (you have to push up on the directional stick/pad to leap in the first), meaning that you can now freely fling shurikens diagonally without leaving the ground. You can also dash through the scenery, run up walls, grab ceilings, charge up for a powerful attack, and as progress is made, obtain new moves like a slide attack and a downward thrust with your sword. Here, Kage is now as fierce as a Ryu Hayabusa or a Joe Musashi.

This all sounds pretty awesome, but I ran into a glaring problem about halfway through my first playthrough, and that had to do with the fact I barely used any of the extra attack moves. Kage 2 is one of those weird games where you have a broad list of attacks, yet sticking to the default stuff, such as the shurikens, sword, and dash, is sufficient in completing most of the adventure. The same goes for your timed special abilities, ninjutsu, which range from shooting flame projectiles and gaining extra strength, to summoning orbiting ice shields and lightning strikes. These are basically only good for sub and end bosses, as, with the exception of the healing ninjutsu, using them for general enemies is a complete waste, since most are killed in one hit. I will say, creating new ninjutsu between stages, by trying different combinations of orbs collected from hidden locations, was a cute, fun distraction with the stylus.

Oddly, too, regardless of the supposed improvements and additions made, Kage 2 feels disturbingly faithful to the original. Your character no longer controls like garbage, sure, but the same game flow is applied here: ninjas coming at you from all angles. There's a presence of preset enemies, but the randomness is still very strong with this title, as you'll constantly have a barrage of ninjas, along with kunoichi, dogs with blades in their mouths, vultures, and more rushing your poor protagonist. Worse, their attacks are extremely hard to read, if at all, and it doesn't help that most usually attack the moment they appear on screen, giving you little-to-no reaction time. What's more irritating is how you can't tell if opponents are below if you're on a cliff or a platform, so there's always a 50% chance of dropping into a group midway through their attack animations. Graciously, this game has a health bar, which also slowly drains with each hit, and considering the severe number of times you get hurt, it's truly a saving grace. 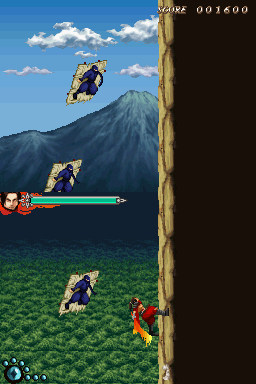 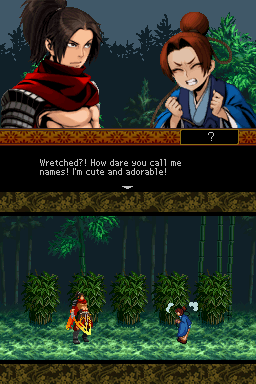 This all sounds pretty annoying, but I ran into a blatant design flaw about halfway through my first playthrough, and that had to do with the fact I was able to walk through enemies without getting damaged. Granted, you'll get hit by their attacks in some cases, but it's more or less the same type of outcome if you attempt to kill them, due to their ambiguous attack patterns. Now add in your character's high jumping, and Kage 2's structure falls apart without fail. Really, the only time you're ever forced to stop temporarily is for the sub-bosses, since the screen actually halts scrolling for these fights. And hilariously, given the walk-through aspect, you can easily exploit these sub-bosses by moving behind them as they attack. Ridiculous.

Once you realize this inane truth, the game essentially becomes a battle of attrition, as you try making it to an end level boss in one piece. Once you arrive at one, there's a high likelihood that your health and power meters are halfway drained, and you'll die simply because you didn't go in fully stocked. An actual challenge in Kage 2??? Nah. When you opt to retry, you restart at the boss with full health and power... And while these bosses do require more thought than the average foe, their patterns are incredibly transparent after observing for a good, say, 15 seconds, making them repetitive chores, sadly. The only times it truly felt like I was getting my butt handed to me was the cave boss, since her patterns are vertical and tasked me with climbing up and down the walls, and the last two boss encounters, which are more due to not knowing where their weak points were placed. 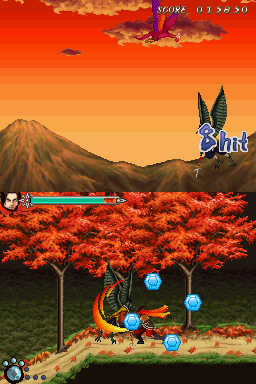 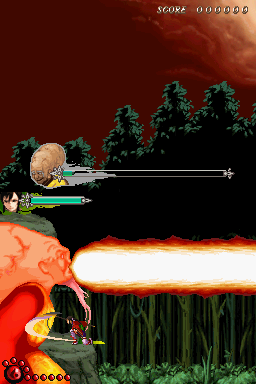 But hey, at least we have some 2D sprite eye-candy, right? Well... Actually, I will say that the character sprites, while all faceless, are charming in a very simple way, and some animations, especially on the bosses, actually look pretty smooth. I thought the same way about the backgrounds at first, until I noticed a good chunk of the game is situated in forests: you start in a cherry blossom forest, then a foggy forest, then a forest on a mountain, then a forest with no leaves. When I finally reached the castle, I was elated; not because it was cool, since it wasn't, but because I had something different to look at. Like, I know all they had to work with from the original was a forest and a castle, but I think they took the term "remake" way too literal.

Don't put too much stock into the extended plot, either, as it falls into a predictable method of storytelling you see in something like shonen anime, where Kage is thrown into a situation that's overwhelming for him, but through determination and the power of friendshiahgaohfurgbks. Not that there's anything wrong with that, but here it feels like the writers were filling in blanks on a character synopsis template sheet and hoped for the best; the protagonist now has a rival because (the rival felt like having one); the rival plays a flute because (ninja); there's an unnecessary plot twist because (people automatically like plot twists, right?); antagonists only get character development seconds before they die because (trying to force emotions on the player); the protagonist and rival resemble models and don't wear clothing over their chests because (we want to sell as many copies as possible, so appeal). You get the point.

I should note that Kage 2 brags about having two different stories, due to there being two characters to chose from when you start a new game file. Now, the reason I haven't mentioned this second character until now is by virtue of her not being dramatically different from Kage in terms of moves and the story. With Chihiro, she has a somewhat larger power meter, the shurikens are replaced with a chain weapon, and her plot is slightly altered in minor places, specifically the opening and ending cutscenes. For further proof that she's basically a throwaway character, the name of her final stage is titled "The Legend of Kage", despite Kage never once showing up or even mentioned in her storyline. Real smooth. 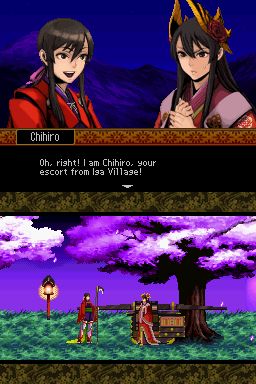 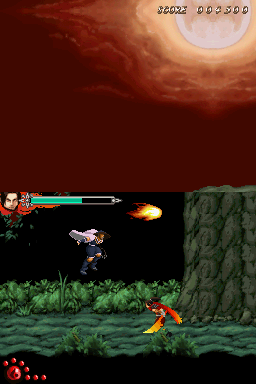 For one final fumble, there's a harder difficulty setting that gets unlocked once the game is completed. Here, most enemies now take two hits to kill and boss fights are a bit more aggressive. However, the same exploitable rules apply here, too, and possibly the most asinine thing ever: your expanded health and power meters, as well as all the ninjutsu you've created, carries over! How is this considered a harder difficulty when you go in more powerful than when you first played it??? I... I mean, how do you improve so much over the original game, yet at the same time, fail super hard at being a normal action game? It's like you had all the right ingredients, and just as you were mixing them altogether, you accidentally spilled the mixture on the ground, desperately scoped up the remnants, then said, "What the hell is this!?"

You know what really kills me? The Legend of Kage 2 has a solid soundtrack. What is it with bad games and memorable soundtracks?!
2/5

If you enjoyed this The Legend of Kage 2 review, you're encouraged to discuss it with the author and with other members of the site's community. If you don't already have an HonestGamers account, you can sign up for one in a snap. Thank you for reading!

© 1998-2021 HonestGamers
None of the material contained within this site may be reproduced in any conceivable fashion without permission from the author(s) of said material. This site is not sponsored or endorsed by Nintendo, Sega, Sony, Microsoft, or any other such party. The Legend of Kage 2 is a registered trademark of its copyright holder. This site makes no claim to The Legend of Kage 2, its characters, screenshots, artwork, music, or any intellectual property contained within. Opinions expressed on this site do not necessarily represent the opinion of site staff or sponsors. Staff and freelance reviews are typically written based on time spent with a retail review copy or review key for the game that is provided by its publisher.