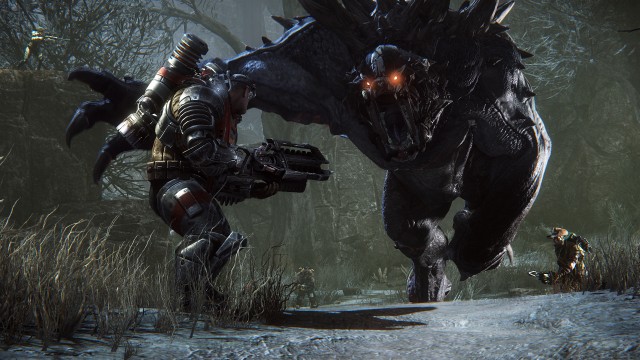 A year ago, people were getting riled up over Titanfall being sold at full price. Now, I love Titanfall. I gave it an enthusiastic review last year and I still occasionally return to it. At the same time, I recognize the danger in this model wherein a multiplayer-only arena shooter  one in which the servers could be empty within a month for all we know  is released for $60.

Ultimately, Titanfall was saved by its entertainment factor. It was an easy source of immediate, vertically-charged thrills. It was a one-note game, but that note was being played by a seasoned orchestra. Evolve sits on the other end of the spectrum. Its note is being played out-of-tune by a mediocre bassoonist. Its driving concept is intriguing on paper but results in a multiplayer environment that plods and chugs, where occasional bursts of excitement punctuate drawn-out periods in which both parties wait for something to happen. Had this been included as a throwaway online component alongside a hearty single-player game, I'd have played it a couple of times and never given it another thought. As a standalone product, it's embarrassingly skimpy. Turtle Rock Studios' transparently elaborate DLC plans only serve to grant this enterprise an air of sliminess.

So Evolve is an asymmetrical shooter in which four gun-toting soldiers touch down on an alien planet with the intent of tracking down and killing a massive monster controlled by a solitary fifth player. The game's title refers to the process in which the monster devours local wildlife in order to metamorphose and even the scales. Since the hunters have the advantage in power from the outset, the player piloting the monster will spend most of the match avoiding conflict, staying one step ahead of the opposing team, eating animals whenever the opportunity arises and advancing through two additional (and more powerful) forms. The hunters can temporarily limit the monster's movement by trapping it in massive, makeshift domes, and that's usually the only time prolonged battles happen. The monster, being the only participant who can't respawn, tends to be on the run a lot. 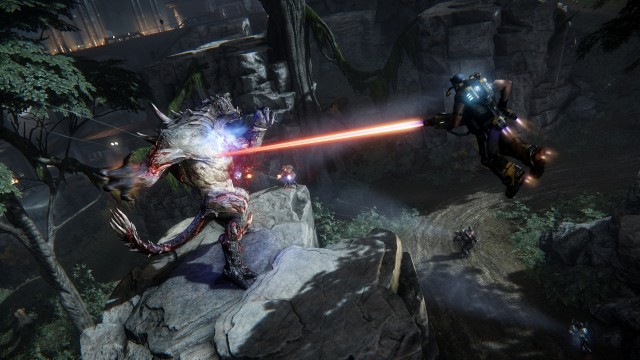 If you're a hunter, the process of actually tracking down your target is a matter of following a couple of rather straightforward visual cues, namely glowing footprints and some clear notifications whenever the monster gives its location away by startling a flock of birds. You'll occasionally have to deal with some aggressive wildlife, but most of the match is spent circling around moderately-sized maps on a well-signposted trail. The kicker was supposed to be that the monster can obscure its movements through stealth, but slowing down for even a second too long in Evolve dramatically increases the likelihood of the hunters  who have jetpacks and can traverse terrain quickly and with ease  catching up to you. And hiding isn't really an option when the playable monsters are all ostentatious, hulking menaces.

So the only sensible strategy on the monster's part is to stay on the move, only making brief and necessary stops to snack on animals. And thus the majority of your time with Evolve is spent in a fairly uncomplicated chase. It's a bit frantic when you're the one being hunted, but only one of the five players gets to be in that position. You can prioritize roles, but hey, if there's an open match and the only available job is the medic, it's not like you can argue. The actual team dynamic between the four hunter classes is solid enough, with only one person having access to straightforward weaponry while the others contain the monster, weaken it, and protect their teammates. But, again, very little of your time is spent actually engaged in combat, and for the lengthy stretches in which both sides anxiously wait for something to happen, the class system may as well not even exist.

Evolve's hook is pretty narrowly focused, and any variations on this general cat-and-mouse setup would've beaten the point, so I won't chide the game for having such a limited selection of modes. I will, however, condemn the game for being so insubstantial when it's not even very fun to begin with. It's only passable as an action romp, but what's puzzling is that the game makes you work for those bursts of mediocrity. "Plodding" isn't a flattering word under any circumstance, but it's especially not a descriptor I'd want to attach to an online shooter. 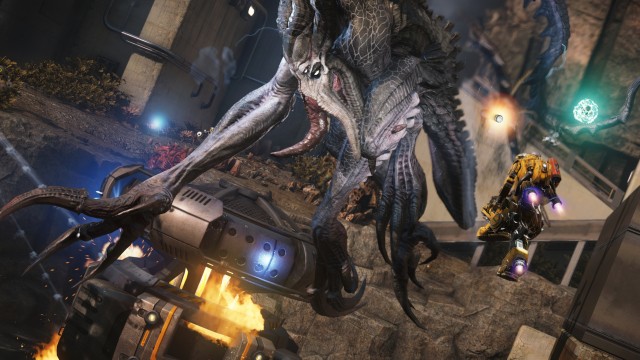 What could have saved Evolve was some variety. There's only one monster available out of the gate: Goliath, a rather generic brute that stomps about and throws rocks. Two other monsters are included, but even if you put in the (considerable) time necessary to unlock them, you're still counting on everyone else unlocking them, as well. About 95% of my matches as a hunter have been against a Goliath, essentially turning Evolve into a feature-length battle against the Tank from Left 4 Dead. Super-occasional appearances by the second-tier monster, a flying Lovecraftian horror that spews lightning, were mildly entertaining just for diversity's sake. I've heard that the third monster is stealth-centric, which sounds cool. I've never seen it, because no one has it.

Due to that, Evolve is predictable, and that kills its longevity. Having a larger list of playable monsters  none of them walled off by progress trees and microtransactions, I might add  would've kept things fresh on both sides. It'd also have helped if the much-hyped evolution system, from which the game draws its freaking title, actually affected the match dynamic beyond simply boosting the monster's health and attack power. Imagine if monsters gained new abilities as they evolved? Imagine, more generally, if players were called upon to adapt to new circumstances on a regular basis? Evolve hedges its bets on a thin, undercooked premise. You'll have seen most of what the game has to offer by the time you've wrapped up the tutorial.

Charging full price for a package as meager as Evolve is a move I'd label as "overconfident" if it weren't for the comically extensive DLC plans that 2K has unraveled for this thing. Unfortunately, it seems that we were right to scold this practice; either shady monetization schemes have milked a promising premise dry, or the premise didn't have much promise to begin with. Either way, Evolve isn't worth your money.

If you enjoyed this Evolve review, you're encouraged to discuss it with the author and with other members of the site's community. If you don't already have an HonestGamers account, you can sign up for one in a snap. Thank you for reading!

© 1998 - 2022 HonestGamers
None of the material contained within this site may be reproduced in any conceivable fashion without permission from the author(s) of said material. This site is not sponsored or endorsed by Nintendo, Sega, Sony, Microsoft, or any other such party. Evolve is a registered trademark of its copyright holder. This site makes no claim to Evolve, its characters, screenshots, artwork, music, or any intellectual property contained within. Opinions expressed on this site do not necessarily represent the opinion of site staff or sponsors. Staff and freelance reviews are typically written based on time spent with a retail review copy or review key for the game that is provided by its publisher.