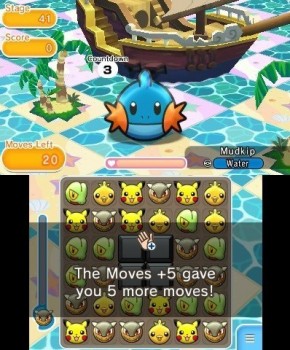 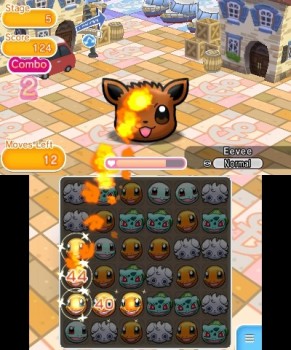 Nintendo has frequently proven that they know their audience far better than I do, but their move to court the mobile market without actually releasing games for mobile platforms seems absurd to me. Their foray into the free-to-play model begins with Pokémon Shuffle, a match-three that can only be played for about five or ten minutes at a time if you're not willing to pay. I understand this approach for mobile gaming, which is tied to a device that you're carrying at all times anyway; quick play sessions are most ideal when you're just looking to kill time while riding a bus or waiting for takeout. But on a dedicated gaming system, even a handheld? Who still carries those around? Who still turns on a 3DS with the intention of turning it off five minutes later?

I'm not terribly partial to this model, anyway  I'd rather pay a one-time fee and enjoy a game with zero interruptions than constantly be confronted with the choice of shelling out for microtransactions or awkwardly bringing the game to a halt every five rounds. I say that, anyway, but apparently a regular ol' retail version of Shuffle already exists. It's called Pokémon Battle Trozei, and I never bothered with it because I didn't feel like gambling money on it. D'oh.

I'm quite addicted to Shuffle. I wouldn't have even tried it if it wasn't free. I still haven't spent a dime on it, and that limited free-to-play model somehow makes the game a more lasting presence in my life. A regular puzzler I could just blast through in a couple of sessions and be done with. But over the last week or so, I've had to constantly remind myself when the two-and-a-half-hour wait is up and it's time to roll through five more rounds of Shuffle. Whenever I sit down to play another game, I get my Shuffle session out of the way first. Whenever I'm watching a movie or a TV show, I keep one eye on the monitor while I whip out the 3DS for some Pokémon shufflin'. Any time spent not playing Shuffle while my heart supply is full is time wasted, you see. By embracing this dumb but effective model, Nintendo has turned this game into a part of my daily routine.

Here's how it works. Shuffle is a match-three in which you engage in completely linear series of battles against Pokémon that can be caught, trained, and unleashed in subsequent bouts. You bring a team of four Pokémon into a round, and they become the tiles; when three or more are lined up, an appropriately elemental attack is unleashed on the opposing creature. It costs a single heart to engage in a battle. Hearts recharge at a rate of one every 30 minutes, and you can only store five of them in this manner at once, which works out to five battles every two and a half hours. 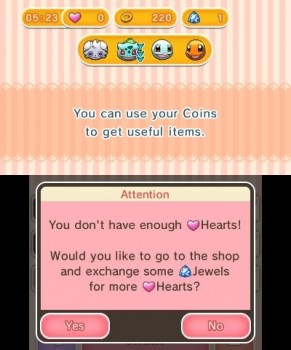 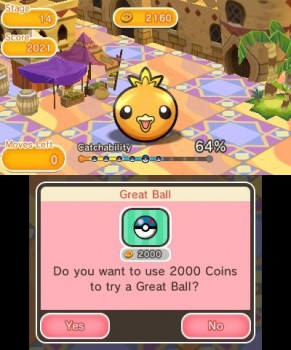 If you're unwilling to wait, hearts can also be bought for jewels, and this is where the microtransactions come in. Jewels are occasionally given to you as battle rewards, but only for beating trainers, and those only roll around every 15 matches or so. The only way to sidle around shelving the game for hours at a time is to purchase jewels for actual, real-world cash. Aside from limiting session time, does this screw with Shuffle, mechanically? A little, yeah. As always, you make your Pokémon more powerful by training them, but each battle costs a heart whether it's a repeat or not. Nobody wants to grind for ten-minute stretches, especially when that time could be used to make some actual progress. Catching Pokémon is engaging, but most of them will get sidelined as the challenge ramps up and you stick to your frontrunners.

So is Shuffle fun? Well, yeah. That's how they get you, aye? I don't know what it is that makes the match-three formula so enticing, but I'd be hard-pressed to name a single core gamer who hasn't at some point become a slave to this genre, whether they're currently hooked on Marvel Puzzle Quest or were dumping time in Candy Crush Saga before it was discovered that the creators of that game are insufferable bullies. And while grinding is a concept at odds with this model, some of the other staples of the Pokémon series work well; the usual elemental type system means that a great deal of consideration goes into which Pokémon are deployed and which matches you're looking to make in-game. The fact that better performance leads to a greater likelihood of a Pokémon being caught is a far more potent incentive than meaningless letter grades.

So as cheap, silly and uninspired as Shuffle is, I'm tempted to shrug and say, "Who am I to argue?" It's only through a culmination of specific circumstances that I even tried Shuffle to begin with; games like this are all over the place, but I dismiss the majority of casual titles because, y'know, they're not published by freaking Nintendo. Maybe I'll ditch this for Battle Trozei and have a great time, or maybe I'll just accept Shuffle as evidence that I am a cheapskate, willing to submit myself to trial by waiting if it means I get to play an enticing little Pokémon match-three without pulling out my credit card.

If you enjoyed this Pokémon Shuffle review, you're encouraged to discuss it with the author and with other members of the site's community. If you don't already have an HonestGamers account, you can sign up for one in a snap. Thank you for reading!

© 1998 - 2022 HonestGamers
None of the material contained within this site may be reproduced in any conceivable fashion without permission from the author(s) of said material. This site is not sponsored or endorsed by Nintendo, Sega, Sony, Microsoft, or any other such party. Pokémon Shuffle is a registered trademark of its copyright holder. This site makes no claim to Pokémon Shuffle, its characters, screenshots, artwork, music, or any intellectual property contained within. Opinions expressed on this site do not necessarily represent the opinion of site staff or sponsors. Staff and freelance reviews are typically written based on time spent with a retail review copy or review key for the game that is provided by its publisher.