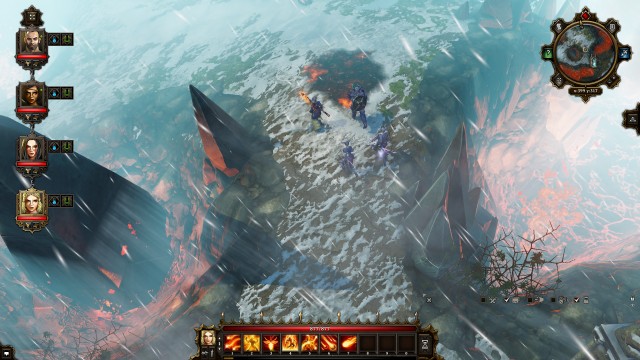 My primary caster in Divinity: Original Sin had a strong leaning on geomancy, and early in the game, I taught her the ability the lay oil slicks onto the ground. The level requirement was low and the power could be used every turn for only three AP, so hey, what the hell, oil slicks. The immediate effect of laying oil is to slow enemies, but as you've likely surmised, the oil can then be set alight by any fire-based attack. My mage had a projectile spell that did the job, and thus plastering battlefields with burning fuel became her major role in combat. Later, I discovered that the projectiles were non-elemental, and that they only did fire-based damage when cast with a fire-based staff. I spent the rest of the game selling any staves I found that were constrained to other elements. It was the first of many complications to learn in developing this bizarre battle strategy of mine.

Now, turning warzones into infernos sounds awesome, and it is, but it's also dangerous. For one, the fire itself has no less of an effect on my own teammates, so any spot that could do burning damage to my enemies was effectively off-limits to my party as well. I learned this after a few foolish instances in which I'd unwittingly isolated enemies with bows who were perfectly content to hide behind walls of flame taking shots at melee-centric allies who couldn't do a damn thing without losing their eyebrows. Casters with high hydrosophist ratings can generate water-based shields to counteract this, but it's a cumbersome and temporary solution.

And what about fire-based enemies? They heal when standing in burning oil. Can't have that.

Most critically, Original Sin is unusually full of inflammable materials. Any poisonous fluids burn easily in this world. Enemies keep barrels of the stuff lying around their strongholds  because, y'know, they're disgusting orcs who are into that stuff  and while that can grant firestarters a tactical advantage, things get more complicated when it's discovered that certain creatures in Original Sin actually bleed toxic chemicals. Not only does this turn them into ticking time bombs when set ablaze, but every single attack on your part that may result in spurting blood must be carefully orchestrated. Once, I ordered my rogue character to backstab a flaming zombie, because she gets bonus damage for backstabs. In doing so, she effectively sprayed napalm all over a melee fighter of mine who had been attacking the same zombie from the front.

Isn't this all so complicated? Isn't it all so wonderful? God. Divinity: Original Sin is the best CRPG I've ever played.

I know, I know  it's treason to bestow that title upon any game other than Baldur's Gate II: Shadow of Amn or Planescape: Torment or whatever your favorite CRPG happens to be. And truth be told, it'll be years before we know for sure if Original Sin has the staying power to rival the all-timers. But I can't think of another CRPG that more perfectly encapsulates what I approach a game like this expecting. Does it have great turn-based combat? The most satisfying I've ever fought. Is it massive without being a grind? I dumped nearly 80 hours into the thing without once feeling like I was spinning my wheels. Does it lean heavily on player choice? You can kill literally any NPC in the game and developer Larian Studios will contrive another way to keep the plot moving.

It's an extraordinary title, and also an important one. There's this attitude in the AAA games industry that there's no substantial audience for hardcore experiences anymore, and yet here's Original Sin, boldly doing everything that we're told isn't profitable and raking in critical and financial success for it. This was crowdfunded, too, because we want the games that major publishers are too afraid to give us. We want color, humor and personality. We want games that earn their entry fees with richness and scope. We want games that don't treat us like idiots.

In fact, the biggest criticism I've seen of Original Sin is that it assumes a bit too much of players from the start. If you weren't nursed on Black Isle formula, working your way through the game's dense menu system is only the start of it. Mechanically, only the absolute basics are explained, and important features  such as repairing equipment and recruiting new party members  are left for players to puzzle out on their own. On a larger scale, there's the general lack of direction. There are no quest markers. You need to either pay close attention to the information given to you or merrily explore until you hit something important.

The game's unwelcoming structure will pose some problems for new players, because Original Sin is pretty tough. When you land in the game's first major area (where you'll easily spend a good 20-30 hours), you're technically allowed to go wherever you want, but you're also expected to poke hot surfaces and surmise just which of these routes you're physically capable of handling, and which you need to save for later. Of course, aside from parsing out Original Sin's difficulty spikes, one of the game's biggest thrills is in the realization that as long as you're not woefully underpowered, any battle is fair. This is the first RPG I've played in ages in which every single member of my party served a genuinely different role in combat. Experimentation is welcome and all approaches are valid. Unique unlockable perks, like the ability to restore health by standing in a pool of blood, waver the stakes in any good battle. 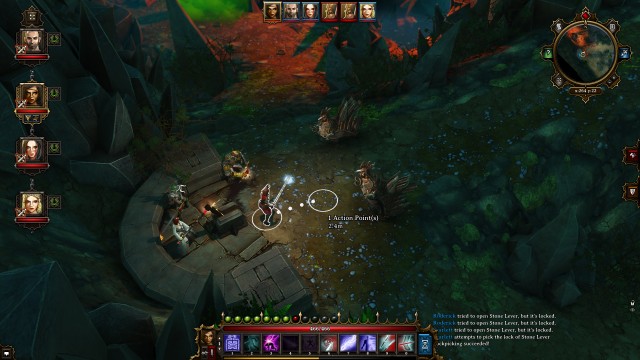 Enemies in Original Sin do not respawn, which I find to be a smart decision for multiple reasons. On the player's end, it means that grinding isn't an option. Not only does that prevent the game from becoming needlessly repetitive even if by your own choice, but it means that you've got to do the best you can with what you've got. There's almost always more content to explore if you're stuck, but you can't just blindly dump more time into Original Sin and eventually expect the game to do your job for you. One way or another, you've got to get better. And from the developers' standpoint, this means that the game must be acutely balanced in such a way that it's never unfair, that there's always something to be accomplished that's on the player's own skill level.

The best thing that I can say regarding Original Sin's difficulty curve is that it never breaks its own rules, and I'll give you an example. One of the environmental hazards that you'll bump into from time to time is lava. Walking over it is an instant kill for any unit that isn't fire-based, which, you'd imagine, makes it pretty dangerous. The ability to just conjure up lava at any point would be overpowered to say the least, but there is an expendable scroll that allows you to create a pool of the stuff in the middle of a battlefield. It's a one-time use, and it's an extremely rare drop, to the point that most people complete the game without ever finding one. I happened upon one by chance and kept it in the corner of my inventory as a potential get-out-of-jail-free card should I ever find myself in a tight spot.

Said tight spot was the final boss, who, lo and behold, is indeed susceptible to fire-based attacks. Sure enough, I was able to one-shot the final boss using this scroll. Any other developer would have negated this with, I don't know, some veiled resistance to ultra-rare lava scrolls or something. But not Larian. They said, "You know what? That's in the rule book. You have a ball." Down went the boss and roll went the credits.

So Original Sin is a treasure trove of emergent thrills in ways that even the most top-tier of CRPGs couldn't dream of, but that doesn't answer the question of whether this title trumps games like Planescape on a narrative level. The answer is that it doesn't and it can't. Larian made the brave decision of shaping Original Sin into a comedy game, which reverses much of the self-seriousness that typically drowns Western RPGs but also leaves the game a bit emotionally distant; it's difficult to take this game seriously when I'm upping my smithing skills from a book entitled "He Who Smelts It."

But Original Sin tries anyway, and it's more successful than you'd think. For one thing, although it does pull many of the usual fantasy levers, this is not just generic Tolkien worship, and the many details unique to this world  who are these invincible knights marching all over the place? what's with this toxic metal that's being mined?  shine through in the game's second half. Beyond that, I was surprised just how engaged I became in the plights faced by two protagonists that I'd initially viewed as blank slates and nothing more. While they're moldable to your will  you can get them to argue with one another or, conversely, hilariously agree on every single thing  there's more history and purpose in their role as heroes than you'd assume. Note that they're holding hands on the game's cover art. That's your only clue.

Original Sin isn't a narrative masterwork, of course, but it's a masterwork in other areas, and that its writing is frequently funny, often absorbing and occasionally just the slightest bit touching rounds out what is already a brilliant game  deep, rich, enormous, and supported by a soundtrack (compliments of Kirill Pokrovsky) that I wanted to keep listening to after nearly 80 hours of play. It's the best game in a very, very long time. We've got a few more promising CRPGs headed our way, and I wish the best of luck to the developers of Pillars of Eternity and Torment: Tides of Numenera, because the bar couldn't realistically be set any higher.

If you enjoyed this Divinity: Original Sin review, you're encouraged to discuss it with the author and with other members of the site's community. If you don't already have an HonestGamers account, you can sign up for one in a snap. Thank you for reading!

© 1998 - 2022 HonestGamers
None of the material contained within this site may be reproduced in any conceivable fashion without permission from the author(s) of said material. This site is not sponsored or endorsed by Nintendo, Sega, Sony, Microsoft, or any other such party. Divinity: Original Sin is a registered trademark of its copyright holder. This site makes no claim to Divinity: Original Sin, its characters, screenshots, artwork, music, or any intellectual property contained within. Opinions expressed on this site do not necessarily represent the opinion of site staff or sponsors. Staff and freelance reviews are typically written based on time spent with a retail review copy or review key for the game that is provided by its publisher.